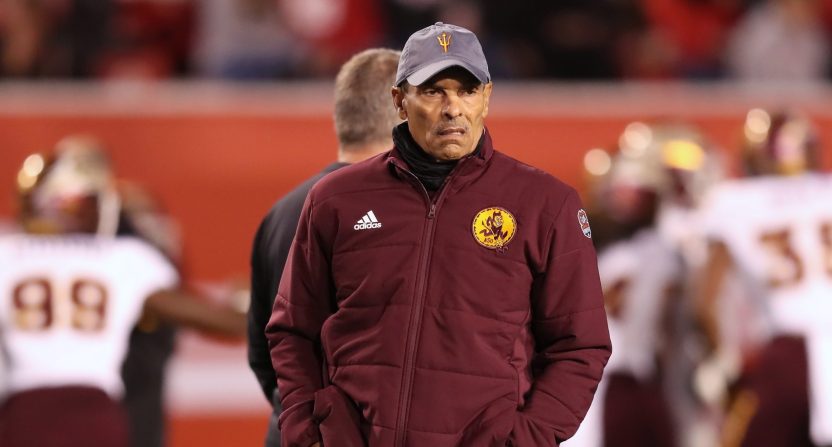 The start of the 2022 college football season will be here soon. Here’s a look at five coaches who might be in trouble:

Herm Edwards was an odd hire from the start when he took over the Arizona State program in 2018. The longtime NFL coach hadn’t worked in college since 1989, and he hadn’t coached anywhere since 2008 after being fired by the Kansas City Chiefs. He left a cushy job as an ESPN analyst to get back in the game. Strictly based on on-the-field performance, Edwards has been decent. However, it’s the off-the-field issues that might sink the 68-year-old.

Arizona State is under investigation for alleged NCAA recruiting violations. This has led to a mass exodus with 17 players transferring out, including former three-year starting quarterback Jayden Daniels (LSU), defensive tackle Jermayne Lole (Louisville), and linebacker Eric Gentry (USC). There are a lot of new faces with 14 transfers coming in, including tailback Xazavian Valladay (Wyoming). Edwards may not survive this mess.

There was a time when Dino Babers was one of the hottest names in coaching. He was the guy who helped develop Eastern Illinois quarterback Jimmy Garoppolo into a second-round pick and future Super Bowl quarterback. With an exciting offense, he guided Syracuse to a 10-3 record and top-25 ranking in 2018. That season now looks like an outlier. Since then, the Orange have reverted to irrelevance, going 11-24. And the offense has become pedestrian. Syracuse could be the worst team in a mediocre ACC this fall.

The good news is that Syracuse has 17 returning starters, including star tailback Sean Tucker. Plus, five of its first six games are at the JMA Wireless Dome (Ugh. Still doesn’t sound right.). But then there are back-to-back games against Clemson (on the road) and Notre Dame (at home). Babers has been in upstate New York for a long time, so possibly both sides could use a fresh start.

Only in the SEC could a coach be treated like an unpopular leader of a third-world country. Bryan Harsin survived a coup that threatened his job security after one season. Even by rabid SEC standards, that’s an amazing lack of patience for a hire that was mostly applauded originally, although there were also concerns about how Harsin would fit into SEC culture. Harsin had no ties to Auburn, the conference, or the region, other than one year stint as Arkansas State’s coach in 2013. He has spent most of his life in the Pacific Northwest.

Auburn finished tied for last in the SEC West along with LSU. But the Tigers shut out Alabama for three quarters before falling 24-22 in quadruple overtime. The Tigers are expected to struggle again, so Harsin might just be living on borrowed time. He can help himself by getting off to a fast start because Auburn’s first five games are at home.

In 2021, things happened in Tallahassee that are hard to believe. First, Florida State was beaten at home by FCS Jacksonville State, thanks to the worst defensive call in school history. Second, the Seminoles opened the season 0-4 for their worst start since 1974. Third, the program embarrassingly lost high school cornerback Travis Hunter, the No. 1 recruit in the country, to Jackson State coach and Florida State alum Deion Sanders. Any one of those things would be a fireable offense these days. And they all happened over a span of four months.

Mike Norvell probably would have been ousted if not for his massive buyout. Instead, the school extended his contract by one year. But, more importantly, the buyout should be lower. Florida State played better down the stretch, winning five of eight. The key for this season will be the play of quarterback Jordan Travis, who will try to lead the Seminoles to a winning record for the first time since 2017.

Scott Frost’s retention might have been the biggest upset in the sport. How does anyone remain at a major-conference job after four straight losing seasons? Especially at a tradition-rich program like Nebraska. Many people were convinced that athletic director Trev Alberts —hired last summer— would ultimately put an end to the Scott Frost Experience. Ultimately, most athletic directors like to bring in their own guys. Instead, Alberts is giving Frost another chance at a reduced salary. To save himself, Frost fired several assistants and brought in Pittsburgh offensive coordinator Mark Whipple, who developed Kenny Pickett into a first-round pick.

Both Alberts and Frost hope this will be a win-win for both. If you want to be optimistic, you could make the argument that Cornhuskers were extremely unlucky last year. All but one of their nine losses were by one score. Maybe Texas transfer quarterback Casey Thompson will help. If not, this surely will be the end for Frost.