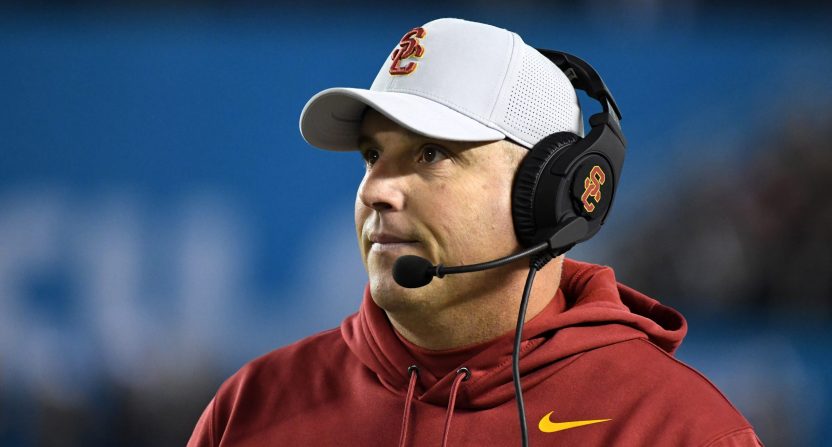 We don’t know if there will be a 2020 football season. But if there is, here are the top five major-conference coaches who are in dire need of big seasons:

It’s funny how things turn out. In January 2018, Arizona hired Kevin Sumlin. It was lauded as a great move by most. Sumlin is an experienced and accomplished coach who went 51-26 at Texas A&M with three bowl victories. Just a month earlier, Arizona State hired Herm Edwards. It was criticized as a poor choice. Edwards had no college head coaching experience, and went 54-74 in NFL stints with the New York Jets and Kansas City Chiefs. Well, the former ESPN analyst has done a decent job at Arizona State. Sumlin has been a bust.

Last season, Arizona got off to a 4-1 start before finishing on a 7-game losing streak. All of those defeats by double-digits. He’s also 0-2 against Arizona State. Sumlin hopes new coordinator and former Iowa State coach Paul Rhoads can fix a leaky defense (Rhoads spent the past two seasons as UCLA’s defensive backs coach.). The Wildcats were last in the Pac-12 in points allowed (35.8) and yards allowed (471.4) in 2019.

No coach has been more disappointing. Chip Kelly was the most sought-after free agent in fall of 2017. UCLA beat out Florida, and everyone applauded this move. It seemed like the perfect match. Kelly turned Oregon into the most exciting program in the sport. Yes, he failed in the pros with the Philadelphia Eagles and San Francisco 49ers. So what? He was back in college football and back in the Pac-12, a conference he dominated (33-3 in league play from 2009-2012). Surely Kelly would replicate that success in college where he could out-recruit the competition and stack up his roster to build another national championship contender.

Under Kelly, the Bruins have been worse than they were in the final two seasons of his predecessor (Jim Mora was 9-14 from 2016-2017). Even worse, UCLA ranked eighth in the Pac-12 in scoring (26.7). The offense improved over the final nine games, including a 67-63 shootout victory at No. 19 Washington State. But the Bruins closed the season with three straight losses. Kelly needs to at least get to a bowl game.

Tom Herman can’t blame Charlie Strong anymore. When he first took over Texas, Herman criticized his predecessor for Texas’ lack of talent. That led to Urban Meyer ripping Herman for not taking responsibility. Well, we’re now entering Year Four of the Herman administration and these are mostly his recruits. The Longhorns were supposed to challenge Oklahoma for the Big 12 title last season. They weren’t even the best team in their own state. Texas finished third behind Oklahoma and Baylor which wasn’t even ranked in the preseason top-25 poll.

Herman has brought in new coordinators. He threw tons of cash at former Ohio State assistant Mike Yurcich to become his new offensive coordinator. Under Yurcich, the Buckeyes had the nation’s third-highest scoring offense (46.9 ppg). The new man in charge of the defense is former Rutgers coach Chris Ash, who was a championship coordinator at Ohio State in 2014. Herman’s fate might be determined by how his team fares against LSU and Oklahoma. The Longhorns came close last year, losing both games by one score.

Will Muschamp was an odd fit from the start. Why would an SEC school hire a guy who struggled at another SEC school? Muschamp went 28-21 with one bowl game win at Florida. And yet, he landed his current gig within the same division? America! What a country! It’s among the most confusing hires in recent memory. Predictably, Muschamp has been as mediocre at South Carolina as he was at Florida.

In recent seasons, the Gamecocks have gotten progressively worse. Last year was weird. They stunned No. 3 Georgia on the road 20-17 in double overtime. Then they closed the season losing five of their final six games. It also doesn’t help that in-state rival Clemson has won six straight against the Gamecocks. Muschamp has brought in new offensive coordinator Mike Bobo, formerly the Colorado State head coach and ex-Georgia offensive coordinator. The early part of the schedule is favorable, with three straight home games (Coastal Carolina, East Carolina, Missouri) and a road trip to Kentucky. But if South Carolina gets off to a bad start, Muschamp might not make it to October.

It feels like USC is postponing the inevitable. One of the biggest surprises of the offseason occurred when new athletic director Mike Bohn announced that Clay Helton would return. ADs usually like to bring in their own guys, and a lot of people expected that when Bohn was hired last November, his first job would be replacing Helton. There was a ton of speculation that Urban Meyer was waiting in the wings. Maybe the timing wasn’t right. Maybe the buyout too high. Whatever the reason, Helton remains in charge. He’s under contract through 2023, but another mediocre season will probably doom him.

Last year was an improvement (8-5, 7-2) over the previous season (5-7, 4-5). But USC hasn’t won a bowl game since 2016, and hasn’t finished the season ranked since 2017. There will be changes in 2020. Helton revamped his staff with six new assistants, including defensive coordinator Todd Orlando, formerly of Texas. And former starting quarterback JT Daniels has transferred to Georgia. If sophomore Kedon Slovis — who took over for the injured Daniels — continues to improve, perhaps that might save Helton. The Trojans open the season against Alabama at AT&T Stadium.