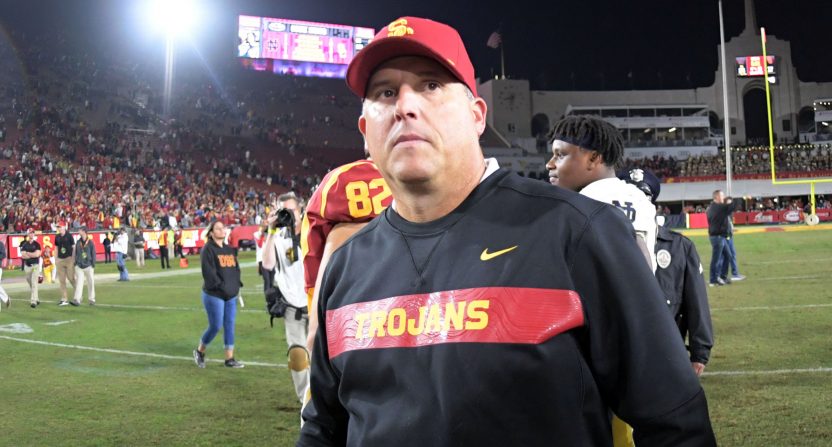 We’re about a month away from college football practice starting. Here are the top five major-conference coaches who are in dire need of big seasons:

It feels like Gus Malzahn has been on the hot seat since the winter of 2014. Malzahn has either done just enough to survive or had a buyout so high that it gave administrators a nosebleed. If Auburn fired him last year, he reportedly would’ve been owed $32.1 million. Yes, the Southeastern Conference makes a lot of money. But even in the SEC, that’s a huge amount of change to swallow. He’s under contract through 2024, but if the Tigers falter again, a few rich donors might be about to cobble something together. There’s also the possibility that perhaps another school might be interested in him. (There were rumors linking him to Georgia Tech last year and Arkansas in 2017).

But maybe Malzahn is the best Auburn can do for right now. The SEC West is brutal. It’s bad enough facing Alabama, but also you must contend with LSU and Texas A&M. Auburn — a 2018 preseason top-10 team — was a huge disappointment, finishing 8-5, 3-5. What was particularly jarring was a 30-24 home loss to Tennessee (5-7, 2-6).  The Tigers could bounce back behind a great defensive line and a freshman quarterback (Bo Nix or Joey Gatewood).

Remember when Lovie Smith was supposed to be the next great NFL coach? Smith went 81-63 in nine seasons with the Chicago Bears (2004-2012). He guided the Bears to a pair of NFC Championship games and a Super Bowl appearance. Oddly, he was fired after going 10-6 in his final season. It’s been all downhill since then. Smith was 8-24 at Tampa Bay, and he’s been terrible with Illinois. Amazingly, he got a contract extension. However, the buyout decreased.

On the positive side, last season was Illinois’ best under Smith. However, it was still a last-place finish in the West Division. Also, Illinois has a good running game (243 yards per game, second best in the Big Ten), led by Reggie Corbin (1,085 yards, nine TDs).

On the negative side, he’s a defensive coach, and yet the Illini surrendered 39.4 points per game – the seventh-most in the nation.  His team lost 63-0 at home to Iowa. #Yikes.

We also need to have a talk about Smith’s gray beard. You can’t go into a home and expect to close the deal with a recruit looking like a homeless person.

Firing a coach after two seasons is unfair and unfortunate. College football has long had a diversity problem. There are only 12 African American coaches in the FBS. Considering that black players make up more than half of the players in the FBS, it stands to reason that minorities in upper management positions should be closer to that percentage. But college football has never been about fairness. The reality is that Taggart is in serious trouble. Florida State saw the nation’s longest bowl streak snapped at 36. That’s unacceptable at Florida State. However, the reaction by some Seminole fans was ugly and bigoted.

Taggart has gotten off to slow starts before (2-10 in his rookie year at Western Kentucky, 2-10 in his first year at South Florida). He usually rebounds. Taggart has a new offensive coordinator in Kendal Briles. But unless the Seminoles fix their offensive line– arguably the worst in Division I last year — this team still might struggle. Taggart knows how to build a program, but will he get the time he needs? And will fans be patient after watching Clemson take over as the premier ACC power?

Under normal circumstances, Chris Ash would be long gone. How can a Power 5 coach go winless in conference play (twice!) and still be employed? Rutgers only victory last season was its season-opener against Texas State. Rutgers lost to Kansas 55-14. Rutgers hasn’t beaten a fellow Big Ten opponent since a 31-24 decision over Maryland in November 2017. Why is Ash still there? Money. A financially-challenged athletic department didn’t feel like paying his $10.35 million buyout. That number will shrink to $8 million which would still be costly for Rutgers. However, Rutgers might be more inclined to pay if the Scarlet Knights have another disastrous season. You can only be a punchline for so long.

Rutgers didn’t get into the Big Ten on merit. It only received an invite due to its proximity to the New York City media market. Everyone knew playing in the Big Ten would be difficult. but was it really supposed to be this bad? The offense scored 13.5 points – the fewest in the nation. If Rutgers doesn’t show signs of progress, the Ash era could be over.

The University of Southern California is one the most prestigious jobs in the land. But this high-profile program has had a mediocre track record recently when it comes to hiring coaches. The Trojans lucked out with Pete Carroll who wasn’t even their top choice. Carroll delivered in a big way with a pair of national championships and an 97-19 record. After Carroll bolted for the Seahawks – and ahead of NCAA sanctions, USC has tried to fill the void with Lane Kiffin (fired on an airport tarmac), Steve Sarkisian (fired while taking a leave of absence to deal with an alcohol issue), and Clay Helton.

No coach will be under more pressure than Helton. It was a surprise that USC brought him back after the program went 5-7, and 4-5 in a lousy Pac 12. It was the school’s first losing season since 2000. If you take the Sam Darnold years out of the equation, Helton’s record as a full-time coach is 10-11. This season, the Trojans have a tough schedule with potentially six ranked opponents. The hiring of offensive coordinator Graham Harrell could help quarterback J.T. Daniels, as well as the return of top wide receiver recruit Bru McCoy (if he’s approved for a hardship waiver), but Helton’s exit seems inevitable.