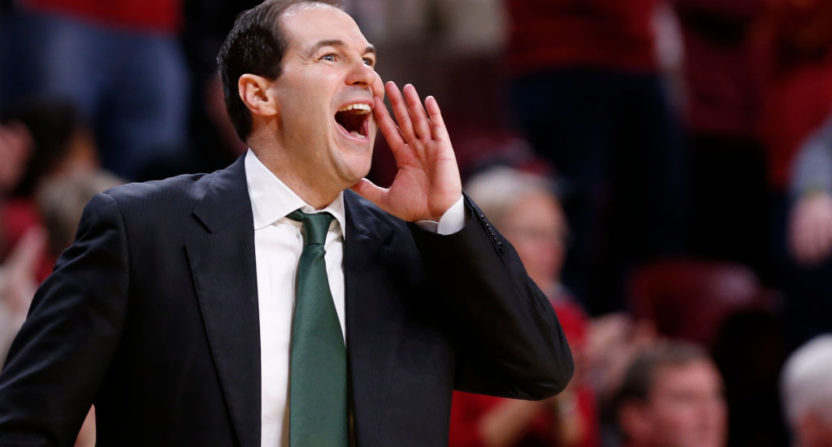 The Big 12 has always been a storied college basketball conference, but it’s been the most enjoyable to watch for a handful of years now. Kansas shouldn’t have much trouble earning its 14th straight Big 12 title, but there are still plenty of captivating storylines through the league.

So let’s dive right in to five questions we can’t wait to see answered this fall and winter.

1. Is Devonte’ Graham National Player of the Year material?

Only once before has a school had two different players win National Player of the Year in back-to-back seasons. That honor belongs to Duke’s Shane Battier and Jason Williams in 2001 and 2002. If Graham, a senior guard, settles in nicely to his role as the Jayhawks’ star, he and Frank Mason III (a second-round pick to the Kings) could join them.

Like Mason, Graham originally committed to a small mid-major program, Appalachian State. But in his first three years at Kansas, he proved he’s way, way, way too good for the Sun Belt. He averaged 13.4 points, 4.1 assists and 1.5 steals last season. Mason’s junior year were quite similar: 12.9 points, 4.6 assists, 1.3 steals.

Graham struggled in the Jayhawks’ Elite Eight loss to Oregon, but generally he’s shown an ability to perform on the big stage. He averaged 20 points with a 76.6 effective field goal percentage through the first three games of the 2017 NCAA Tournament. While the three-point shot is his main method of scoring, he’s also a crafty finisher, converting 70.2 percent of his shots at the rim.

And it doesn’t hurt that he’s an extremely likable athlete who plays with a smile on his face.

Less than 3 minutes in and Devonte Graham is already smiling. #kubball pic.twitter.com/vqMcXj2rZ9

2. How good of a scorer can Jeffrey Carroll be?

There’s plenty of reason to doubt Oklahoma State this season. The Cowboys lost stud point guard Jawun Evans to the NBA and mastermind coach Brad Underwood to Illinois. On top of that, they have an FBI investigation looming over their heads after (now-former) assistant Lamont Evans got arrested for alleged bribery.

But Jeffrey Carroll should excite Oklahoma State fans this season. He’s the Big 12’s top returning scorer at 17.5 points per game, and you can expect him to hang 20 a night this year. He could even lead the nation in scoring among high-major players.

Between losing Evans and shooter Phil Forte, Oklahoma State won’t sniff the Top 25 this season, even if Mike Boynton turns out to be just as good a coach as Underwood. But with Carroll putting on a show every night, they can surprise some teams in the Big 12 and return to the NCAA Tournament as a low seed.

3. Who’s the best frontcourt player in the league?

Texas freshman Mohamed Bamba is the easy answer here. He’s undisputedly the top frontcourt prospect through an NBA lens. But this league is filled with great forwards and centers.

Another one… This time the whole basket almos came down. #KUbball pic.twitter.com/Eis9fwC5pi

Over at TCU, Jamie Dixon has a pair of potential all-conference first teamers in seniors Vladimir Brodziansky and Kenrich Williams.

We’ve heard plenty about Bamba’s rim-protecting abilities, and he’ll have a handful of tough challenges during the league schedule.

4. Will Scott Drew turn this ragtag group of Bears into a Top 25 team again?

Baylor began last season unranked and climbed all the way to No. 1 by January. They struggled a bit in February and March but turned things around with a Sweet 16 run, losing to eventual East Region champion South Carolina.

Once again, Baylor may begin the year unranked. The Bears lost two of their top three scorers but return three of their top five. So you can spin that any way you want. It would be surprising if they’re as good as last year following Johnathan Motley’s departure for the NBA, but even though this roster doesn’t have any big names or top recruits, remember that Drew has never needed top recruits or household names to win a lot of games.

After Kansas, the Big 12 should be wide open. We could see Baylor snag second place and work its way into the top 15.

5. Is eight NCAA Tournament teams too much to ask for?

We’ve never seen a conference send 80 percent of its membership to the NCAA Tournament. The Big 12 has flirted with that mark a few times recently, but late collapses by Kansas State in 2015-16 and West Virginia in 2013-14 dashed those hopes.

It’s incredibly difficult to get eight teams into the field because someone’s gotta be losing all those games the other seven teams are winning. You can bet your life savings on Kansas, West Virginia and Baylor getting bids. TCU could be another Top 25 team, and Texas Tech projects to fall on the right side of the bubble. With Texas and Oklahoma prepared to make big jumps this season, Oklahoma State will be the x-factor.

With a first-year head coach and a handful of sophomores playing key roles, the Cowboys will take their lumps in conference play. And outside of a home game against Wichita State, they don’t play a particularly challenging non-conference schedule. So they’ll need to avoid any slip-ups if the Big 12 wants to make history on Selection Sunday.