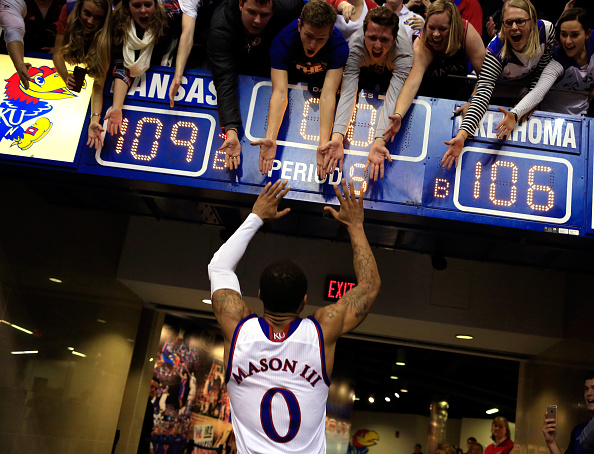 Welcome to Five College Basketball Questions You Need Answered. Any retransmission of this column without the express written consent of the author is prohibited and punishable by being run over by a hoverboard (more on than later).

No.1 If the NCAA tournament began today, would Kansas be the top overall seed?

There was a case to be made that Maryland-UNC was this season's best game so far.

Kansas withstood a career-high 46 points from Oklahoma’s Buddy Hield in 54 minutes. With Michigan State’s Denzel Valentine sidelined due to injury, Hield might be the new frontrunner for national player of the year.

“It’s the toughest game I’ve played,” Ellis said to ESPN. “We fought. It was going both ways. Both teams were making shots. It was a great effort. It was awesome.”

Kansas has done its due diligence by then No.23 Baylor 102-74 and surviving against Oklahoma. Both victories were at home, yes, but beating ranked teams back to back will get everyone’s attention.

At the heart of the success has been an overwhelming offense. Kansas is seventh in the Pomeroy offensive efficiency ratings – up from No.36 last year. The Kansas City Star detailed how coach Bill Self has embraced a small ball lineup, keyed by 5-foot-11 Frank Mason and 6-2 Devonte’ Graham.

As a direct result, the Jayhawks are third in the nation in scoring (88.3 ppg), fifth in field-goal percentage (51.6) and second in 3-point field goal percentage (46 percent).

“It really opens up the floor for everybody,” says 6-5 guard Wayne Selden told the Kansas City Star. “We’re able to spot up and shoot the ball just because they’re able to get in (the lane) every time. (We’re able to) drive off their drives, off of bad close outs, because they beat their man so easily.”

Kansas has only played one true road game – winning at San Diego State. It will have an interesting matchup on Saturday at Texas Tech (11-1).

Perhaps no team represents the current state of college basketball quite like UCLA. If you’ve figured out the Bruins, please forward a detailed explanation to the rest of us. They were good enough to beat Kentucky and win at Gonzaga. They are mediocre enough to lose at home to Monmouth, at Washington and at Washington State – three teams with a combined 13 losses.

The Bruins were picked to finish fifth in the Pac – 12 behind, Arizona, California, Utah and Oregon. Still, they gave a glimpse of what they could be by beating then No.1-Kentucky last month and winning at then-No.20 Gonzaga.

UCLA’s frontcourt of 6-9 senior Tony Parker and 7-footer sophomore Thomas Welsh can be formidable. But that wasn’t enough to prevent two clunkers on the road to open up conference play. The Bruins had been 103-16 all-time against Washington State before falling 85-78 on Sunday.

“This is not the way we want to start the league and now it becomes a very long, tough road,” UCLA coach Steve Alford told the L.A. Daily News.

On New Year’s Day, the Bruins – playing their first game since Dec. 22 – lost at Washington in double overtime 96-93. Alford wondered aloud if rust was a factor. This time, the Bruins had one day off between games.

“That’s just part of college basketball and being fatigued, that’s a mental softness and we can’t have that,” Alford told the Daily News. “We have to be tougher.”

Alford is in his third year since UCLA surprisingly hired him to replace Ben Howland. Last season, the Bruins surged down the stretch to make the NCAA tournament and reached Sweet 16.  They might need another late-season rally.

No.3 Will Duke ever run out of Plumlees?

Mike Krzyzewski seems to have a never-ending supply of Plumlees. He’s cornered the market by having Miles Plumlee, Mason Plumlee, Marshall Plumlee, and Macbeth Plumlee. Well, just kidding on Macbeth.

Duke has had at least one of the Plumlee brothers on its team every year since 2009-10 when Miles was a freshman. The Blue Devils reached Plumlee critical mass in 2011-12 when all three brothers were the roster. (Marshall redshirted that year as a freshman and did not play). This season will likely be the end of the Plumlees since Marshall is a graduate student.

The older Plumlee brothers are doing well for themselves. Miles plays for the Milwaukee Bucks while Mason is with the Portland Trailblazers.

No. 7 Arizona (13-1) at UCLA (9-6) on Thursday: Pac-12 favorite Arizona has lost only to Providence, 69-65 in late November. The Wildcats have won three straight against UCLA. The Bruins? As noted above, you never know what you’re going to get from them. Would you be surprised if they won?

No.5 Will a coach seriously injure himself after falling off a hoverboard?

Hoverboards are the scourge of society. Think of them as the slightly less annoying cousin of the Segway. It’s only a matter of time before Kevin James is riding one in Paul Blart: Mall Cop 3 in 3D.

Last week Kentucky coach John Calipari posted a video on Twitter on his failed attempt to use a Hoverboard.

Old people should not try this.

Fast forward to March. We’ll probably see at least two coaches on the sidelines in foot casts due to injuring themselves on a hoverboard.

On the positive side, it could lead to great moments like this one.