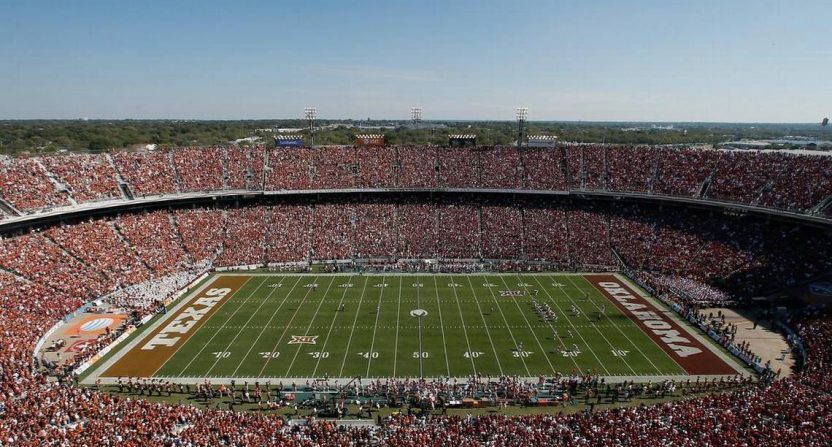 With October here, the air is cooling and college football is hitting its prime. Conference races will begin heating up this month, setting the stage for the final stretch in November to the College Football Playoff. The first Saturday in October will serve up a few contests that will help shape a few conference and division races as we begin to separate our true contenders from the pretenders.

First up on our agenda this week: a high noon showdown in the Red River Shootout Rivalry.

Texas is heating up, but are Longhorns ready to challenge Oklahoma?

Since a disappointing start to the 2018 season with a loss at Maryland, the Texas Longhorns have slowly been putting it all together. After slugging their way past Tulsa in their home opener, Texas has scored three straight wins. Those were highlighted by back-to-back wins against USC and TCU, by 23 points and 15 points respectively. After cracking their way back into the top 25, Texas went back on the road and won a gritty game at Kansas State. Now, the stage is set for the biggest measuring stick for Texas yet; No. 7 Oklahoma at the Texas State Fair.

Although the last two seasons have not gone well for Texas overall, they have brought their best against the rival Sooners. Texas let last year’s game slip away from them in the fourth quarter when Baker Mayfield delivered a 59-yard touchdown pass to Mark Andrews for a 29-24 win. The previous year, the Longhorns nearly pulled off a memorable fourth-quarter comeback after being down 42-27 in the final quarter, but came up five points short in a 45-40 victory for Oklahoma. And this one always gets plenty of people talking:

The Sooners have won three of the last four games in this historic rivalry, and six of the eight games played in this decade. What will it take for Texas to celebrate what has become a rare win against Oklahoma this week? The keys to success are pretty obvious, and Army provided the best template for how to do it (despite falling in the end). Keep Oklahoma’s offense off the field and knock them off rhythm, if you can.

Kyler Murray had six touchdown passes for the Sooners last week against Baylor as they rebounded from their home scare against Army the previous week. Texas is not equipped for getting involved in a shootout with the Sooners at this point in time, so Tom Herman has to find a way to get things moving consistently. Unfortunately, having the Big 12’s eighth-best rushing offense may not allow for Texas to put together the kind of game that may be needed to finally get Herman a win against Lincoln Riley and the Sooners.

Surprise! LSU vs. Florida is a pretty important game!

Alabama and Georgia remain the teams to beat in the SEC this season. The first month of the season has done nothing to suggest otherwise. However, because we simply should not take anything for granted, this weekend’s contest in Gainesville between LSU and Florida has become a game well worth paying attention to.

LSU is one of the four undefeated teams in the SEC, and continuing that trend to keep pace with Alabama is pretty much essential. In the SEC East, Florida has already taken a loss at home to Kentucky, so the Gators cannot afford falling one more game back in the SEC East standings with their big game with Georgia looming on the horizon at the end of the month. This one likely does not end up being a preview of the SEC Championship Game, but the importance of this one cannot be stated enough.

The bet is on.

If Florida wins: @CoachLesMiles will wear one of Spurrier's visors. pic.twitter.com/5kp3voMIGe

This rivalry has been pretty heated in recent years, but LSU has held the upper hand with wins in four of the last five meetings. The last four have all been decided by one score as well, and there is no reason to suggest this one will be any different. So which team should you be more confident in?

It just might be LSU. The addition of Ohio State transfer quarterback Joe Burrow, the LSU offense isn’t necessarily one that will dominate any opponent, but there is more consistency with the offense. Burrow has yet to throw an interception this season. LSU has already beaten ranked opponents away from Baton Rouge with wins against Miami in Arlington and a road division game at Auburn. They have a real shot to add a third with the Gators.

Chip Kelly has had a rude welcome back to college football and the Pac-12. And it does not look to get any better this weekend unless we get one of the top upsets of the year this weekend. UCLA, off to a woeful start of 0-4, hosts No. 10 Washington Saturday night.

Washington is a three-touchdown favorite on the road against the Bruins, demonstrating just how far apart UCLA is from the class of the Pac-12 at this time. Of course, it was well-known that Kelly was not going to be able to just return to the conference and experience the same caliber of success he once had with Oregon. UCLA is in a massive rebuilding mode, and this is simply a better conference from top to bottom than it was before he left for the NFL. And on Saturday night, that will all be put on display.

Chip Kelly's 49ers and Chris Petersen's Washington both won 1 game at Levi's in 2016.
Petersen is currently favored to win more games this season at the Rose Bowl than Chip Kelly.

The Huskies could use another solid outing too after last week’s impressive beatdown of BYU. Washington had not really been blowing anyone away this season early on, so a confidence-boosting game last week against the Cougars was due to happen. Now, getting one on the road against a struggling program could set the tone for Washington moving forward. The Huskies get UCLA on the road this week and travel to Oregon next week before hosting Colorado. Washington cannot afford to take another loss if they are to remain in the College Football Playoff conversation going to November when they will play Stanford.

Now, watch Chip Kelly get his signature win in the most unpredictable way to show me up.

And don’t think I’m overlooking another possible loss for Scott Frost and Nebraska, with the Huskers playing at Wisconsin this week.

If Notre Dame gets a win in Blacksburg, watch out

After last week’s win, the Notre Dame playoff hype is picking up some major steam in the media. And with an offense that suddenly has new life since the quarterback change to Ian Book, it was to be expected.

The Irish have scored two quality wins against Michigan and Stanford, but now face their first real road test of the year at Virginia Tech. The Hokies have already been written off by many thanks to their catastrophic loss at Old Dominion a couple of weeks ago, but there is something about playing a Bud Foster defense in Lane Stadium when the lights are on. Don’t be fooled about what we have seen this season, because this is a serious test for Notre Dame.

Good note from @RedditCFB. Brian Kelly has won just 1 of 10 road games against ranked opponents since 2013. That one win was a fourth-quarter comeback against Temple. https://t.co/JGwOAaXKjV pic.twitter.com/Ncqwv7QDhD

Virginia Tech’s loss to Old Dominion was an example of just how crazy college football can be. The Hokies have held opponents to three points, 17 points, and 14 points this season, but Old Dominion stunned them with 49 points. This is the same Old Dominion team that scored 10 points against Liberty, 20 against FIU, and 25 against Charlotte. This was not a team that should have been capable of doing what they did against Virginia Tech. It’s a team that followed up their big win with a loss to East Carolina, a program that lost to an FCS program earlier this season.

So write off Virginia Tech against the Irish if you wish. I just would advise against it, especially at home in Blacksburg in front of a fired-up crowd.

If Mississippi State wakes up, put Auburn on upset alert

Remember when Mississippi State was on the rise and being discussed as a team that could pull a Stone Cold Stunner on Alabama to make things crazy in the SEC? That was a fun ride while it lasted, and it’s crashing and burning quickly with two losses in the SEC. At 3-2, Joe Moorhead finds himself facing some serious pressure already to get the offense working the way it was expected to this season. This week, Mississippi State plays at home with the cowbells ringing throughout the stadium against the Auburn Tigers.

Mississippi State’s scoring average has actually improved over their 2017 total so far this season, and the total offensive numbers are not that far off from where they were last season. However, the numbers have been inflated by lopsided results against Stephen F. Austin and Louisiana and a solid showing at Kansas State. Against Kentucky and Florida the past two weeks, Mississippi State has scored a grand total of 13 points. That’s not a good look for a Bulldogs team that was supposed to have a seamless transition from Dan Mullen to Moorhead with Nick Fitzgerald at quarterback. Can they get it together this week against Auburn?

If Mississippi State can play the way they were expected to play this season, then the Tigers could be in some trouble. Auburn is coming off a pretty sluggish (and weather-delayed) 24-13 victory over Southern Mississippi, so they’re looking to get back in form as well. Aside from opening the season in Atlanta against Washington, this will be Auburn’s first road test of the season.

Expect Auburn to get another win, but do not be shocked if this is the week Mississippi State pulls it together in conference play.