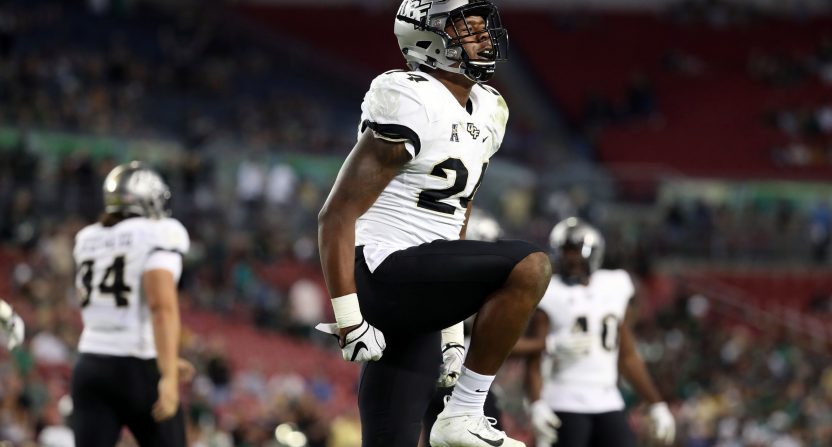 Taking the spotlight this weekend in the Group of Five will be the American Athletic Conference and the Mountain West Conference because the race to a New Year’s Six bowl game will come down to what happens in these two conferences, beginning with the AAC.

Other than the New Year’s Six scenarios in play, there are a handful of coaches worthy of being offered some new jobs during the coaching carousel.

Here are five things to watch during this weekend’s conference championship games throughout the Group of Five.

1. UCF still the favorite for the New Year’s Six

The UCF Knights may be without starting quarterback McKenzie Milton after a horrific knee injury last week, but UCF is still the favorite to win the AAC championship this weekend. UCF hosts Memphis, a team that never manages to beat UCF no matter how good a team Memphis has, although the Tigers have come as close as any teams to beating UCF in each of their last two meetings.

Memphis is not to be overlooked here, but the Knights still have plenty of players capable of leading UCF to a victory, starting with freshman quarterback Darriel Mack Jr. A bit of a dual-threat option himself, Mack has what it takes to keep the UCF offense chugging along, although he will be more likely to rely on help from running backs Greg McCrae and Adrian Killins against a sturdy Tigers defense.

While UCF’s defense has played well the past two weeks, Memphis will give them a good challenge. AAC-leading running back Darrell Henderson leads the charge on the ground but Memphis quarterback Brady White has thrown four interceptions in the last two weeks so there should be some concern about protecting the football for Memphis.

Don’t look now, but Boise State could be the beneficiary of a potential UCF loss on Saturday. If UCF loses at home to Memphis, then the odds are the New Year’s Six spot will go to the Mountain West Conference championship winner between Boise State and Fresno State. Advantage: Boise State.

The AAC championship game kicks off at 3:30 p.m. ET and Boise State and Fresno State are scheduled to get things started at 7:45 p.m. ET. If the AAC title game hasn’t completely wrapped up by the time comes for kickoff in Boise, the result will be known soon after the game starts. If word breaks that Memphis has won, then Boise is going to be rocking.

Both Boise State and Fresno State are ranked in the latest playoff rankings, so it would be surprising to see Memphis climb into the rankings and then pass the Mountain West contenders even with a road win at UCF. So a loss by UCF likely favors Boise State. Fresno State has never played in a BCS or New Year’s Six bowl game, so there could be some history in the making for the Bulldogs program coached by Jeff Tedford.

The UAB Blazers have been one of the feel-good stories over the past 12 months. After storming back from the brief shutdown of their program with a bowl appearance last season, UAB has strung together one of the more impressive seasons among Group of Five teams, and they’re rewarded with their first Conference USA championship game appearance.

However, they will have to win this one on the road against a Middle Tennessee team that just defeated UAB last weekend on the same field. Granted, Middle Tennessee had more riding on the outcome of last week’s game as they needed to win to clinch the East Division while UAB already had the West division locked up.

Win or lose, UAB head coach Bill Clark is deserving of coach of the year consideration. And it would not be a total shock if he ends up getting a few calls from potential suitors looking to fill bigger vacancies.

Buffalo head coach Lance Leipold knows a thing or two about winning championships. The former head coach of Division III powerhouse Wisconsin-Whitewater came to Buffalo four years ago with six D-III national titles to his name in eight years with the Warhawks, including many epic battles with Mount Union.

It took a little time to get Buffalo heading in the direction Leipold expects from his program, but the Bulls have gone from winning two games in his second year to going 6-6 without a bowl invite in 2017 to 10-2 with a shot to win the second MAC title in school history.

Buffalo heads to Detroit for the MAC Championship as an easy favorite over Northern Illinois this week, and for good reason. Buffalo averages 35.3 points per game while the Huskies score just 19.9 ppg, although the Huskies have the best scoring defense in the MAC by allowing just 20.9 ppg. Buffalo is third, allowing 24.3 ppg.

A MAC title for Buffalo and Leipold should help keep his name on the radar for a bigger job as well.

5. Having fun in the Sun Belt

Getting Louisiana to the Sun Belt title game is a terrific head coaching debut for Napier, who has coaching experience at Clemson, Alabama and Arizona State and was among the coaches who fled Tempe once Arizona State hired Herm Edwards. Louisiana won four of their last five games to win the West division, including a clinching game in the season finale against rival Louisiana-Monroe on the road. Not a bad first season.

Satterfield will also likely pop up in coaching rumors. With North Carolina opting for Mack Brown, Satterfield could be in play at Louisville or Georgia Tech, despite a recent contract extension at Appalachian State.

The Mountaineers have been the best team in the Sun Belt all season long, and that was evident from the start as Appalachian State nearly pulled off an upset at Penn State in the season opener. But Louisiana only lost by a score of 27-17 earlier this year, so there’s a chance this game ends up closer than many expect it to.