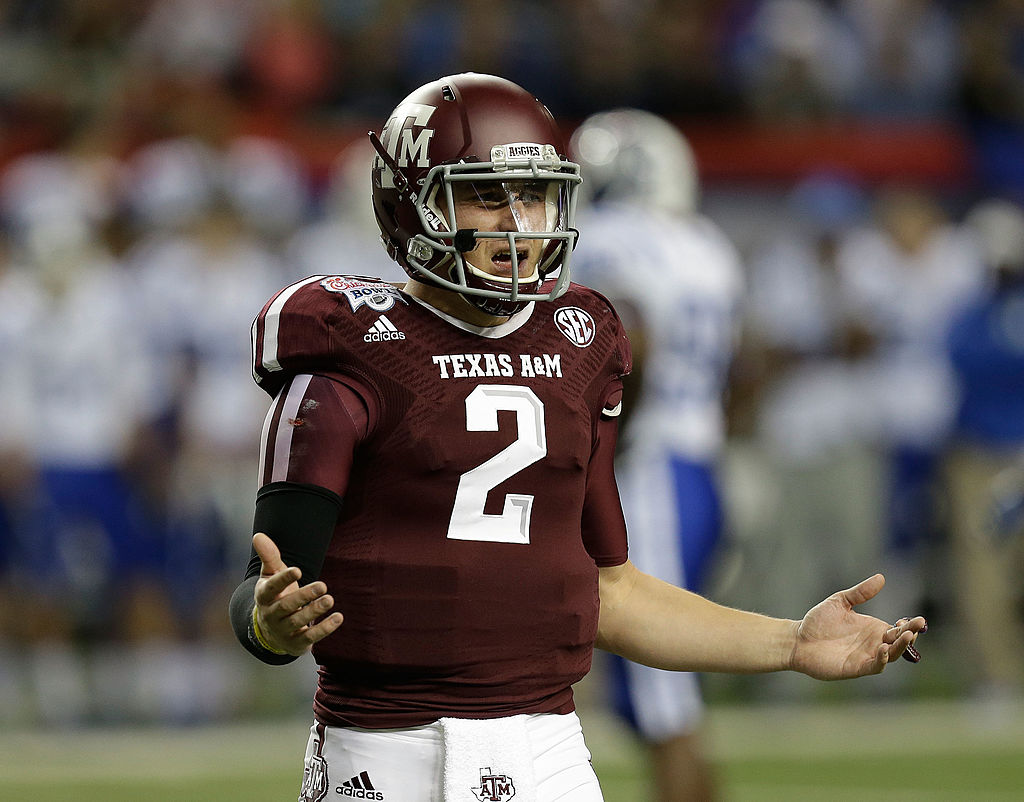 Conference realignment ripped apart some historic rivalries throughout the country less than a decade ago, and it attempted to make up for it by establishing new rivalries. In the SEC, the conferences welcomed Missouri and Texas A&M from the crippling Big 12, and it did not take long for some to question whether or not the conference should have extended the invitations to the Tigers and Aggies. In 2012, the brash newcomers from College Station took the SEC by storm by opening up the playbook and allowing a freshman to make the top powerhouse in the conference and in the nation look foolish on their own home field.

Today marks the fifth anniversary of the day No. 15 Texas A&M with hotshot freshman Heisman Trophy candidate Johnny Manziel and cool and swaggy head coach Kevin Sumlin ventured into storied Bryant-Denny Stadium to take down No. 1 ranked Alabama Crimson Tide. For one awkward afternoon, it looked as though Texas A&M was about to become the new sheriff in the conference. With the benefit of hindsight, we now know just how silly that was to think, as the paths these two programs have taken over the last five years have been quite different.

Leading up to the November 10, 2012 game between the Crimson Tide and the Aggies, Alabama was once again looking like the team to beat in the country and it was expected the dominant defense of Alabama would be the ones to truly burst the bubble for Texas A&M and Manziel’s run for the Heisman. Manziel had been on quite the run to elevate himself as a Heisman candidate to a frontrunner in his first season on the field with A&M.

Although he had already struggled in two losses against new SEC opponents in Florida and LSU, Manziel was coming off a 300-yard game through the air against Mississippi State, who just had their own championship hopes dashed by Alabama the previous week. Young and cocky, Manziel had become the star attraction in college football and was clearly on his way to New York City as a Heisman Trophy finalist. But it was his performance against Alabama that put him in the lead for good with no looking back.

Texas A&M stunned the packed house in Tuscaloosa by roaring to a 20-0 lead on the No. 1 team in the land in the first quarter. It was a quarter that featured enough highlights to fill Manziel’s already-packed Heisman Trophy campaign reel, and Alabama simply didn’t know what to do as Manziel was running all around and making plays with his feet and his arm to reliable wide receivers like Mike Evans and Ryan Swope.

Man, young Johnny Manziel sure can scoot. And, as Verne points out, A&M scores first for the TENTH time this season.

Johnny Manziel's scrambling is so eye-catching, you almost overlook that he's 21-22 passing today on road at nation's #1 D.

Despite a strong effort to come from behind and avoid taking the loss at home, Alabama had dug too big a hole for even them to come back from. With a chance to win the game late in the fourth quarter, AJ McCarron’s pass was picked off by Deshazor Everett on fourth down at the goal line with 1:36 remaining in the game.

The legend of Manziel had hit its peak. Beating top-ranked Alabama on the road in November was more than enough to make up for previous losses to Florida and LSU. And at the time, it appeared Manziel was as cool as they come. Sumlin suggested no moment was too big for Manziel, and nobody would have argued against that.

“No moment is too big for him,” Sumlin said after the game. “If you’re around him every day, I don’t think it bothers him that much.”

Due to unforeseen circumstances, the Finebaum show has been canceled indefinitely.

Manziel went on to win the Heisman Trophy and lead the Aggies to a rout of Oklahoma in the Cotton Bowl, setting the stage for what was going to be a much-hyped 2013 season. Alabama recovered from the loss and worked their way back into the BCS National Championship picture thanks in part to later losses by No. 1 Kansas State and No. 2 Oregon. The Crimson Tide met up with No. 1 Notre Dame in the BCS Championship Game and steamrolled the Irish in Miami to win their second-straight national championship.

From that point, the tales of Alabama and Texas A&M could not be more different.

The 2013 season got off to a bumpy start for Texas A&M and Manziel. An offseason incident regarding signed memorabilia by Manziel put his eligibility into question before the season kicked off. After an investigation by the NCAA failed to come up with the definitive evidence needed to issue any sort of punishment, an agreement was made to have Manziel sit out the first half of the season opener against Rice as it could not definitively prove Manziel received any payments for the autographs. After such a stellar season in College Station in Texas A&M’s first season as an SEC member, the second year with Manziel was a bit of a mixed bag of results. The Aggies went 8-4 in the regular season, a disappointing drop from the 10-win regular season of a year ago, especially since it could not produce a single win against a ranked opponent.

The rematch between Alabama and Texas A&M took place in Week 3 in Texas A&M’s Kyle Field. And while the final score of 49-42 may suggest the Aggies gave Alabama some troubles, it is worth a reminder that Alabama held a 42-21 lead going into the fourth quarter. Manziel and company didn’t give up and only managed to make it a seven-point game with a touchdown with 15 seconds left in the game. There was not much doubt about this one. There hasn’t really been much doubt since then any time these two teams play each other either, even with a somewhat closer call than many expected this fall.

From this point on, Texas A&M entered an agonizing stretch of not living up to hype and expectations that continues to this very day. Fast starts to the season in recent years have only been evened out by lackluster second halves to the season. It has reached a point now where Texas A&M is more routinely connected to various coaching rumors about the job security of Sumlin, who has seen more than his fair share of quarterbacks try to be the next Manziel only to transfer to other programs.

Manziel’s career path has certainly taken a few turns for the worst as well. Despite actually having better passing numbers than his Heisman season of 2012, Manziel declared for the 2014 NFL Draft with some serious question marks about his on-field abilities in the NFL and his off-field personality and concerns. Regardless, the Cleveland Browns made a move to draft Manziel in the first round. That alone should have been an omen. Manziel and the Browns were destined for failure, and it came crashing down rather quickly.

Manziel made his first start for the Browns in the 15th game of the season and completed 10 of 18 passes for 80 yards with two interceptions and was sacked three times in a 30-0 loss. An elbow injury ruled Manziel out of action for the entire 2015 preseason in Cleveland, and his roller coaster of a ride during the year going in and out for Josh McCown was all over the place. Manziel went from being the starter in mid-November to a third-string option after videos of him partying surfaced. Manziel’s desire to party led the Browns to admit they made a mistake and released him the following March. Manziel has not played a down of football in over two years.

As for Alabama, the loss to Texas A&M on that November Saturday did not take down the program as some thought it might. The game seen as the day Nick Saban had the game pass him by soon proved to be nothing more than a mild hiccup on the way to remaining the most consistently dominant force there is in college football. Alabama won the national championship in that 2012 season and then entered the inaugural College Football Playoff as the No. 1 seed in the 2015 season. The Crimson Tide may have taken an early exit to the eventual national champions from Ohio State that season, but Alabama has been the only team to reach the College Football Playoff each of the past three seasons it has been in existence, and they have been the top seed twice and the No. 2 seed once. Alabama has played in back-to-back College Football Playoff national championship games, winning one against Deshaun Watson and No. 1 Clemson and losing this past season to the same Tigers team. Both games could have gone either way.

This season, Alabama once again looks to be on a decent path to the SEC Championship and potentially the College Football Playoff. Tough challenges from Auburn and Georgia await them in the coming weeks, but Alabama remains one of the top programs in the country. In College Station, Texas A&M needs to win just one more game to become bowl-eligible. The Aggies are on pace for their worst season yet under Sumlin after three-straight 8-5 seasons and back-to-back losses in the Texas Bowl and Music City Bowl.

Anyone who watched Texas A&M take the college football world by storm on November 10, 2012 is left confused trying to figure out what has happened to Texas A&M since.