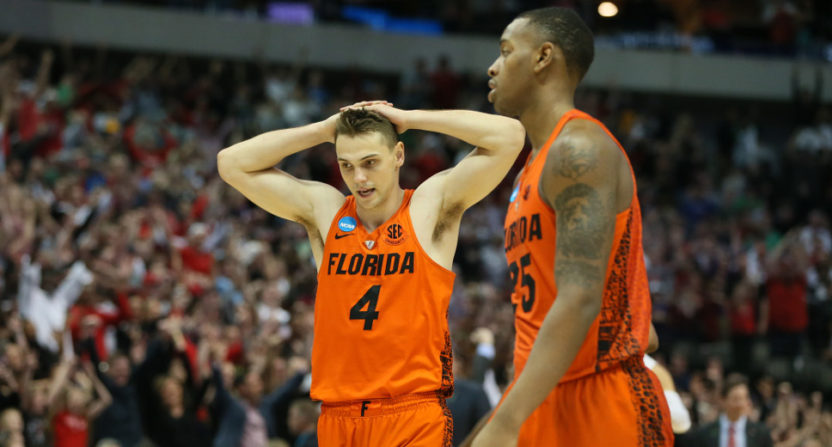 Saturday night’s second-round NCAA Tournament finish between the third-seeded Texas Tech Red Raiders and sixth-seeded Florida Gators was incredible for what could have been. Up three, Texas Tech had the ball to inbound under their own basket with 25.8 seconds left, thanks to a game-tying Gators’ three that came up short and went out of bounds. That meant things looked pretty dire for Florida, especially if it went to a bunch of foul shots. However, the Gators managed to create a turnover shortly after the inbounds pass, and then got not one, but two good looks from deep. Neither fell, though, giving Texas Tech the 69-66 win:

While this didn’t work out for Florida in the end, it’s worth noting all the things they did right here. They played great defense on the inbounds pass, covering Texas Tech’s players so well that the best option for inbounder Zach Smith was a short pass to Keenan Evans, who had two defenders right near him. Those defenders then closed in quickly and did so without fouling, and when Evans tried to go between them and get upcourt, he lost the ball and the Gators’ Keith Stone (seen at right above came up with it on his back. And Stone made a smart play there, quickly getting it to guard Chris Chiozza, who was standing right over him and could continue the play.

Chiozza then did well to drive the lane and draw defenders, but didn’t take the shot himself, knowing Florida needed three; he instead kicked it out to a quite open Egor Koulechov (seen at left above). Now, Koulechov’s decision to dribble and then shoot instead of just putting a shot up can be questioned, but he was presumably trying to throw off the defender closing out, and he still got a good shot off. And Stone did well to grab the rebound and then find an open KeVaughn Allen beyond the three-point line, and Allen got a good shot off with less than four seconds left. It just didn’t fall.

Of course, the Gators weren’t guaranteed a win even if either of these shots dropped. If Koulechov’s fell, Texas Tech might have been able to get off a final shot of their own in regulation, and even if this had been pushed to overtime, the Red Raiders could have prevailed there too. But it is certainly possible Florida might have pulled off an overtime victory, which would have made this game-ending sequence an incredible turning point. And even though they didn’t quite get there, it’s notable how well the Gators played in that final 30 seconds, and how close they came to at least forcing overtime.