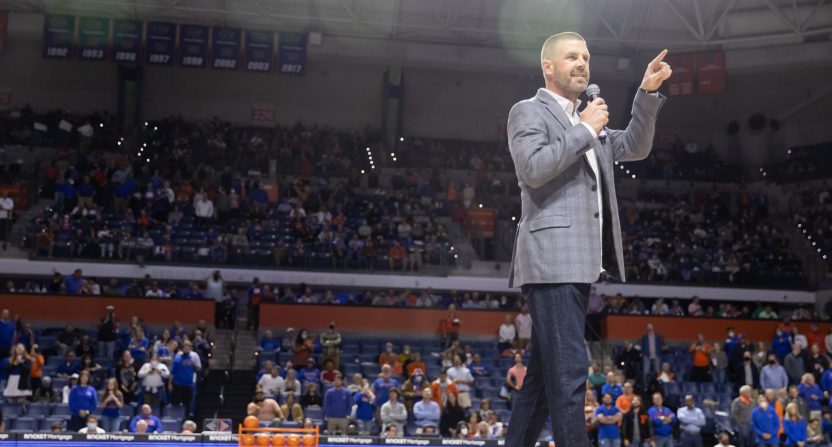 Aside from Alabama fans, the other SEC fanbase less thrilled with the Georgia Bulldog’s national championship victory has to be the Florida Gators.

The SEC East rival is coming off a rough season in which they finished 6-7, fired Dan Mullen, and lost in the Gasparilla Bowl to Central Florida. While the Gators have had some strong seasons recently, they’ve had to watch as Georgia has ascended to the top of college football, finally winning their first title since 1980.

So how does new Florida head coach Billy Napier feel about seeing the Gators’ hated rival hoist the national championship trophy? Well, he’s trying to keep his focus on the task at hand.

“We have our own grass to mow,” Napier said during a Friday press conference. “I’m more worried about what’s going on inside our house as opposed to what’s happening in our neighbor’s house.”

Billy Napier congratulates Georgia & Kirby Smart, notes he has a number of friends on the staff, but says "we have our own grass to mow" and he's more concerned on getting the Florida #Gators right vs. worrying about Georgia.

That’s what you’d hope to hear from your new head coach if you’re a Florida fan. Time to put your head down and get to work rather than focus on what Georgia is doing. And Napier said that the world is not yet done when it comes to hiring, looking at transfer players, and shoring up his new program.

“There’s work left to do here…I think if you get it right in the front end, there’s less issues going forward,” he said.

Napier’s straight-shooting style seems to have won him some style points amongst Florida folks.

It’s weird listening to Billy Napier I feel like he’s actually telling the truth every time he speaks. Wild stuff.

We'll find out how things play out with Billy Napier at UF over the next few years, but I can say that every time he steps to the podium representing The University of Florida, I feel a sense of pride because he's the person leading our program.

Billy Napier has done more on-the-record press conferences in the past 4.5 months than Trent Baalke

Billy Napier has been on the job for 46 days https://t.co/JHM2iLc0ZO

Ultimately, of course, he’ll be judged on wins and losses. And whether he likes it or not, how his Florida teams fare against Georgia will be part of that equation as well.