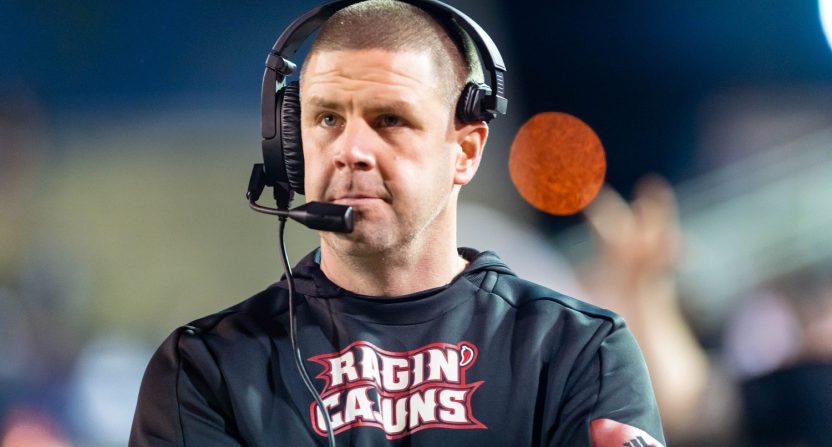 The Florida Gators are going to hire Louisiana’s Billy Napier as their next head football coach, according to reports breaking on Sunday.

Sources: Florida has targeted Louisiana’s Billy Napier as the school’s next coach. An announcement could come as early as this afternoon.

Napier, finishing up his fourth season as head coach of the Ragin’ Cajuns, has amassed a 39-12 record, including back-to-back double-digit win seasons the last two years. They play this Saturday against Appalachian State in the Sun Belt Conference championship game, which Napier plans to coach. After that, it’s assumed that he will leave to begin his new position.

Napier has previous coaching stints at Clemson, Alabama, Florida State, and Arizona State as well. Along with his playing days at Furman, he’s well-versed in The South and the kind of high-level recruiting required to compete in the SEC. Napier has turned down several SEC head coaching opportunities in the past and was thought to be a big candidate for LSU and Virginia Tech this year as well.

Florida will need a shot in the arm as it attempts to quickly rebuild following a 6-6 season that was largely a disappointment. Dan Mullen was fired last week as it became apparent that the Gators were trending in the wrong direction, even though they ended up qualifying for a bowl game with their win over FSU on Saturday. Still, a 2-6 record in the SEC is unacceptable in Gainesville, especially as Georgia seems to be on the verge of a national title, and conference rivals like Ole Miss, Arkansas, and Kentucky are lapping them.

As for how the college football world and SEC world are reacting to the Napier news, it seems to be overwhelmingly positive, even if rivals are upset.

In a few years, LSU will regret not making Billy Napier more of a priority.

And Florida looks like they got it done from start to finish in just a week’s time! https://t.co/nWflTkuQBs

Also Bill Napier going to Florida hurts me personally bc I like him, but hate Florida lmao

Billy Napier put together an impressive list of ass’t coaching prospects when discussing the #Florida job with school officials. Very organized, professional, tireless and relationship based recruiter with excellent skills on developing talent. They were sold from start.

Obviously, the easy part for Napier was getting hired. The hard part is getting the Gators back on track ASAP and competing regularly in the SEC. That’s a challenge that has taken down some of the best and brightest in the game. But there’s always hope for next season, especially now that Florida has the guy they wanted (and a lot of others wanted, too).