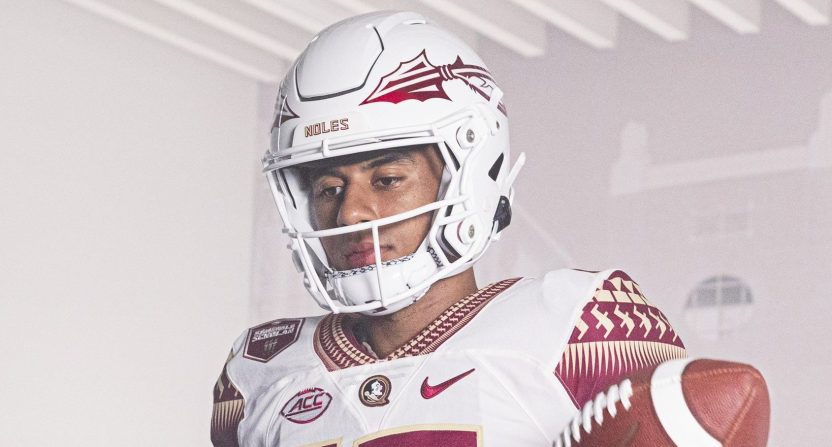 Florida State’s football team will next be in action on Friday, Sept 16 in a road game against Louisville. When the Seminoles take the field in that game, they’ll have a different look than the one college football fans have been long accustomed to.

In a video released on Twitter on Friday by the Florida State football, quarterback Jordan Travis and defensive tackle Jarrett Jackson were walking through the locker room and came upon Travis’ locker. When he lifted up the drapes hanging over the locker, a noticeable chill came out, similar to what one may get upon opening a freezer. We soon found out why.

This is the first time in program history that the Seminoles will don an all-white uniform, including helmets.

Given how synonymous Florida State is with the garnet and gold color scheme, this was bound to get some attention. That’s exactly what happened, with the all-white look drawing a mixed reaction.

This 3x alum isn't feeling the white. Gonna be hard to disinguish them and Louisville….but anyhow, #GoNoles https://t.co/Z32oRIIPrf

Some of these college kids are about to be really disappointed when they get to an NFL locker room. https://t.co/Rh9tD2edC2 pic.twitter.com/Kd0oebCr0i

A variety of responses was expected. Uniform news always gets people’s attention, regardless of the sport.

These are good-looking uniforms for the Seminoles, even if they are a hard break from tradition. Ultimately, how much we’ll see of these going forward will likely depend a lot on how the game goes. If Florida State defeats Louisville, we wouldn’t be surprised to see these back on the field. If not, we wouldn’t expect many breaks from garnet and gold in the near future.