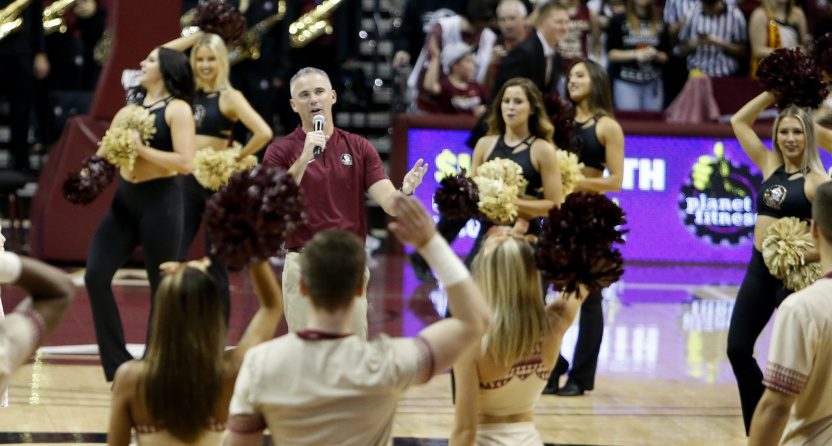 Even before coaching a game at Florida State, Mike Norvell appears to be in some hot water. The Seminoles hired Norvell to be their football coach last December following his success in four seasons at Memphis (and following their firing of Willie Taggart less than two years after his hiring), but he’s now caused a controversy with his comments to Tashan Reed of The Athletic. (Update: Our post on further developments here, including an apology from Norvell, can be found here. Read on for a discussion of the initial situation that sparked those developments.)

Reed, a former Florida State beat writer with The Athletic who’s now covering the Las Vegas Raiders for that publication, posted a quote from an interview he did with Norvell (who’s seen above during his introduction at a December 2019 Florida State basketball game) to Twitter Tuesday night, with that quote featuring Norvell saying “I went back and forth with every player individually this weekend” (after the killing of George Floyd in police custody in Minneapolis and the subsequent nationwide protests). Early Thursday morning, Seminoles’ star defensive lineman Marvin Wilson called that comment “a lie,” saying players only received a generated text from Norvell, and said he and his teammates “would not be working out until further notice” (Florida State players returned to campus Monday for voluntary workouts). Here’s Wilson’s tweet:

Man this 💩 did not happen mane. We got a generated text that was sent to everybody. There was no one on one talk between us and coach. This is a lie and me and my teammates as a whole are outraged and we will not be working out until further notice 💯 #hunchoout https://t.co/6Uuy6K7Eu3

I’m riding with my brothers 4L

I asked, given the racial construction of the roster, whether #FSU had "done anything as a staff to check in with them a little bit more in what may be a challenging time for them on another level?" in the wake of the killing of George Floyd. That was the answer. https://t.co/2FkK4vDLlL

The interview was for our State of the Program series, which we do annually. I'm handling it because I have the knowledge. It takes multiple interviews over time. Honestly, think about this. I'm on a new beat. I'm in a new city. And you think I lied about something… positive? https://t.co/eHLSeVDhsr pic.twitter.com/DPbVhHtVzv

That's how I transcribe my interviews. I used the TapeACall service as usual. I let a team spokesman know I'd be recording the interview before it began as a courtesy. There wasn't any malicious intent behind it. I do so to ensure that I quote subjects accurately. https://t.co/cV9igzXF05

While it’s a little unusual to see a story like this come out of a tweet rather than a full story on a website, the circumstances here make total sense. With Reed the outgoing Florida State beat writer, it makes sense for him to be involved in putting together a state of the program piece on them. It also makes sense for him to ask about what Florida State has done to check in on its athletes in the wake of Floyd’s death and the resulting protests. And it makes sense for him to tweet that quote out; that’s a time-sensitive comment, so it doesn’t make sense to put it in the later state of the program piece. Going after the reporter here is the wrong move.

This wouldn’t be a particularly newsworthy comment if it was accurate, and it probably wouldn’t be worth a full story (especially for someone who’s no longer on the team beat). It would fit in with the general wave of statements we’ve seen from college football coaches on this. But Wilson calling this out as inaccurate and having that claim supported by teammates makes this notable.

And it seems like this could lead to a lot of problems for Norvell. This might mark just the latest case of someone getting backlash for ill-advised comments in the wake of the protests, with other examples including Bill Simmons, Ryen Russillo, Grant Napear, Drew Brees, and the NFL as a whole, but this situation has an interesting difference; it’s not about Norvell saying the wrong thing, but about players saying he didn’t actually do what he told the media he did. And that’s certainly not a great look.

As per Brendan Sonnone of 247 Sports’ Noles 247 site, Norvell held a meeting with players Thursday morning. Sonnone’s piece says “FSU athletic director David Coburn said that the meeting between Norvell and players went well, and that it was candid and open.” So maybe this will blow over in the end.

Update: Here’s our post on Norvell’s apology and Wilson’s comments on moving forward.