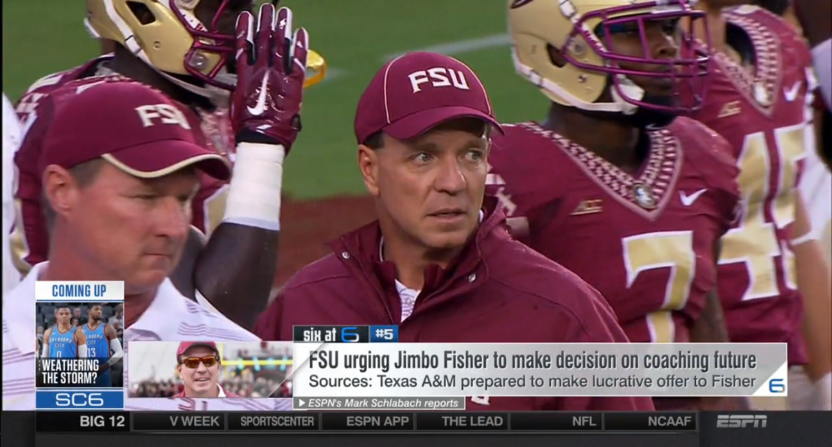 The college football coaching carousel is in full swing, and while the open spots are being filled quickly (except for Tennessee), it’s possible another premier job could come open.

In particular, Florida State might have a vacancy if Jimbo Fisher leaves. And according to a report from ESPN’s Mark Schlabach, they may specifically be targeting minority coaches to fill that vacancy, if it occurs.

Schlabach wrote for ESPN.com that Florida State is pressuring Fisher to let them know if he’s staying or leaving:

Florida State officials are urging Jimbo Fisher to decide whether he will remain the school’s football coach beyond this season or accept a lucrative offer from Texas A&M, sources told ESPN on Thursday.

Fisher, who has guided the Seminoles to the 2013 national championship and three ACC titles, is considered Texas A&M’s top target to replace Kevin Sumlin, who was fired Sunday. ESPN reported last week that several Florida State officials expect Fisher to leave and have been preparing to target his replacement.

That’s an interesting move on its own; Florida State and Texas A&M are certainly both huge jobs, but if one school is preparing to back up a gigantic money truck, maybe you listen hard:

Yeah, that’ll do it. However, this saw a new development when Schlabach went on SC6 to discuss the potential move, and reported a Florida State source told him FSU is specifically looking to hire a minority candidate:

“In case that happens, I’m told FSU athletic director Stan Wilcox would like to land a minority coach if they needed a replacement. So keep an eye on Oregon’s Willie Taggart, former Texas A&M coach Kevin Sumlin, and South Florida’s Charlie Strong.”

There’s nothing inherently wrong with targeting a minority candidate. They’re certainly underrepresented in the coaching population, and though it’s difficult to see Florida State hiring Sumlin due to the optics of hiring a coach that was just fired from the school that hired your coach, Taggart and Strong are both great coaches who have been mentioned in other searches.

Interestingly, in Schlabach’s ESPN.com report, he doesn’t make the same explicit mention he did on the air, but he does name two of those three coaches:

If Fisher opts to leave for Texas A&M, the Seminoles are expected to consider Oregon’s Willie Taggart, Virginia Tech’s Justin Fuente and South Florida’s Charlie Strong as possible replacements, among other candidates.

He names Fuente instead of Sumlin, but Fuente is Hispanic.

Of course, if Jimbo Fisher doesn’t leave, we’ll never know how accurate the report was.