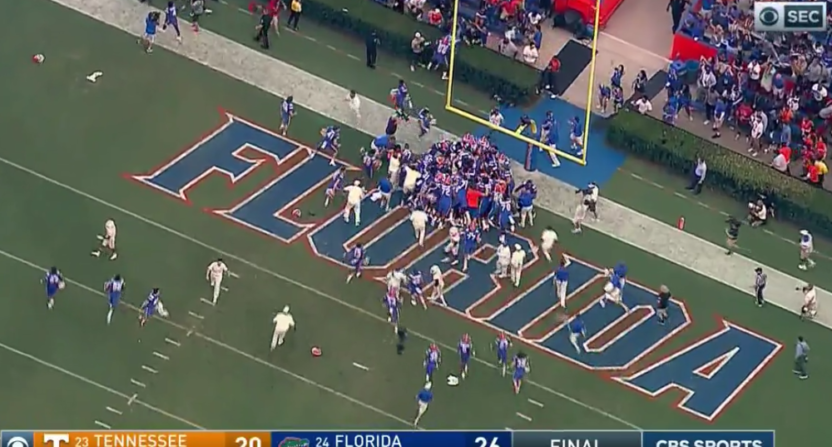 For the first three quarters in No. 24 Florida’s last-second 26-20 win over No. 23 Tennessee in Gainesville Saturday, it didn’t look like either the Vols or Gators would be capable of one offensive touchdown, let alone the insanity that took place in the fourth quarter. And it wouldn’t be a Tennessee-Florida game without requisite crazy drama either, and this game certainly had plenty of it.

At the start of the fourth quarter, the game was 6-3 and no team looked even close to scoring an offensive touchdown. Then, as the quarter began, Florida’s CJ Henderson picked up his second pick-six of the season, this time off Quinten Dormady, to give the Gators a 13-3 lead. Then, after Tennessee missed its third field goal of the game, it looked as if Malik Davis drove a dagger through the Vols with a 74 yard touchdown run, except he fumbled before crossing the goal line. Instead of 20-3, it was still 13-3, and Tennessee had life.

The Vols used only five plays to get within three, capping the drive with a John Kelly TD run. Suddenly, the dormant offenses for both teams came to life, and a defensive struggle became a track meet. And then the Gators responded in kind with a touchdown of their own as Feleipe Franks threw a TD to Josh Hammond, which then officially became Florida’s first offensive touchdown of the season. Had the Gators finally put away the somewhat listless-looking Vols?

Not so fast, my friend, because there was more insanity to come. Two plays later, Tennessee is back within three thanks to a Dormady TD to Ethan Wolf. It’s 20-17, but all the Gators need to do is run out the clock and be smart on offense. And naturally, they don’t, because Franks is promptly intercepted by Rashaan Gaulden, meaning the Vols are almost instantly within range to tie the game, maybe take the lead. Except they can only muster a field goal after a horrific set of red zone downs, complete with multiple penalties on both teams, including two straight false starts on the Vols before a face mask on Florida.

So it looked like this suddenly-bonkers game was going to go to overtime, and Gators’ head coach Jim McElwain certainly played for it with his time management. With two timeouts and about 43 seconds on the clock, presumably Florida had a chance to get within decent field goal range, maybe close enough for a Hail Mary heave to the endzone. But McElwain didn’t want to use his timeouts, not using one on a Franks run which burned about 20 seconds of clock. Except this game had one more trick up its sleeve…

Even writing out all of those words about what transpired in the fourth quarter doesn’t accurately describe what we all just witnessed. It was a glorious combination of bad coaching, head scratching decisions, shoddy defense after three quarters of lockdown defense, and then a Hail Mary that will be etched forever into the history of the SEC and this Tennessee-Florida rivalry.

The win sets Florida up for a big run at the SEC East, and may deal Tennessee an early fatal blow on their road to Atlanta. They were on the other side of a crazy Hail Mary between the Hedges last year, but football fate swings both ways. It crushed Tennessee today in one of the dumbest, stupidest and craziest endings we’ve ever seen, but one that was fitting for this game.