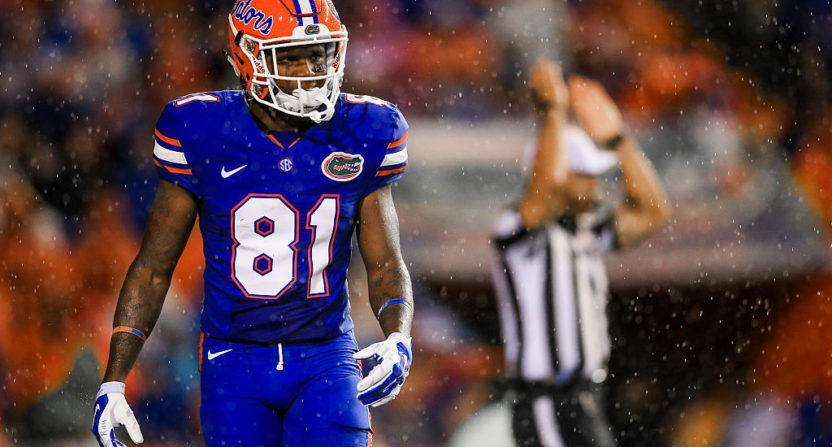 The Florida Gators’ 2017 NCAA football opener against Michigan was always going to be a tough test, as Jim Harbaugh’s Wolverines are ranked ninth in the preseason coaches’ poll (Florida’s 16th, but 14th in our Top 50), but it just got even harder. That Sept. 2 game at the Dallas Cowboys’ AT&T Stadium in Arlington, Texas now looks even tougher. On Sunday, the news emerged that the Gators will be pretty short-handed, and it looks like that’s in relation to a student aid debit card scam. Florida has suspended star receiver Antonio Callaway and six others for the season opener; here’s more on that from Edgar Thompson of The Orlando Sentinel:

“We have a small group of players that have made some choices that are extremely disappointing,” [head coach Jim] McElwain said. “Action has been taken – they have missed some practice and will miss the Michigan game. We will use this as a learning opportunity and we will have some players step up as we move forward.”

As Thompson notes, McElwain said Aug. 3 that he wasn’t anticipating having anyone miss the opener. So what changed? Well, a suspension of Callaway (the only starter here, who had 54 catches for 721 yards and three touchdowns last year and has more catches, touchdowns and receiving yards than any Gators’ receiver over the past two season) had previously been discussed, as he was cited for possession of marijuana in May and pled guilty to a charge of possession of drug paraphernalia last month (and was fined $301). He was also previously suspended in the spring of 2016 over accusations of sexual assault occurring in 2015, but said then he was “so stoned I had no interest in having sex with anyone” and was cleared in an August 2016 hearing. However, it appears to be another issue that was the final straw in Callaway’s suspension and the suspension of those others; a scam to take advantage of funds loaded onto their student aid cards. ESPN’s Edward Aschoff has more:

Florida has suspended seven players for its season-opener against Michigan on Sept. 2 (3:30 ET on ABC) — including its top playmaker, wide receiver Antonio Callaway — for making improper charges on their university student IDs at the school bookstore and then selling those items for cash, university officials confirmed to ESPN Sunday.

One source said that the cards did not have the proper amount of funds on them to purchase the items.

…Players are expected to either return the items or repay the bookstore for the items, but it’s unknown if school officials will take any further action.

Trey Wallace and Oliver Connolly of The Read Optional broke that part of the story earlier Sunday:

Several Florida football players are dealing with internal punishment over the misuse of school funds, per sources with knowledge of the situation.

The players, who include freshmen, sophomores and soon-to-be NFL Draft picks, were disciplined by the school — including football coach Jim McElwain — having allegedly misused Student Aid debit cards.

The players were alleged to have to taken part in a scheme that saw them purchase electronic products with school-issued debit cards before selling them for cash. While this practice is not uncommon in college football, the Gators’ players then went to university officials to report their cards stolen, triggering a school investigation into possible credit card fraud. After investigation officials deemed the cards were not stolen and looked into the purchases, they found the players at fault for misusing funds given to them.

So, yeah, that seems like a problem, and it’s certainly understandable why Florida decided to suspend these players. That’s going to make their opener even tougher, though.