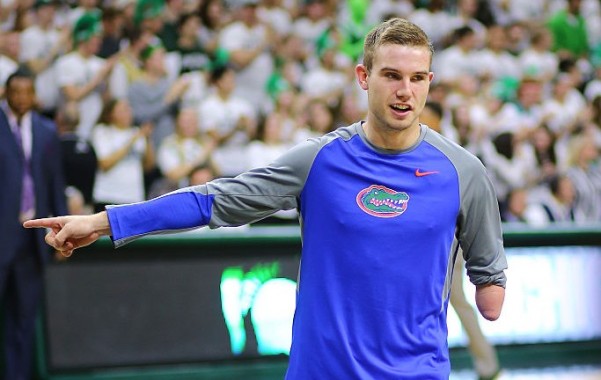 Basketball is one of the few sports that is truly two-handed, and one of the biggest attributes of many players coming up is their ability to be a two-handed dribbler or shooter. That wasn’t the case for Florida Gators walk-on Zach Hodskins, as he was born with just one hand.

It didn’t stop his love for the game of basketball or his ability to play at a very high level either. The Lexington, Kentucky native was offered a preferred walk-on spot from former Gators head coach Billy Donovan before the 2013-14 season.

After sitting out a redshirt year, Hodskins was able to get on the court some in his freshman season. However, he missed both of the shots taken last year. He started this season 0 of 3, but on Tuesday night it was a sweet spin move and lay-in that got him his first collegiate basket of his career.

Donovan saw the talent, new head coach Mike White has gotten to work with it and Hodskins’ hard work has apparently paid off.

“Really happy for Zach, a great young man, obviously overcoming an unbelievable adversity,” coach Mike White said, via ESPN. “He’s a very, very likable young man. You could tell by the decibel level in the O’Dome when he scored. It was a fun moment for our team and for Zach. Proud for him, happy for him.”

Lest you think this was a pity play or a walk-on for publicity, Hodskins put on a highlight reel career in basketball-mad Kentucky before getting to the Gators.