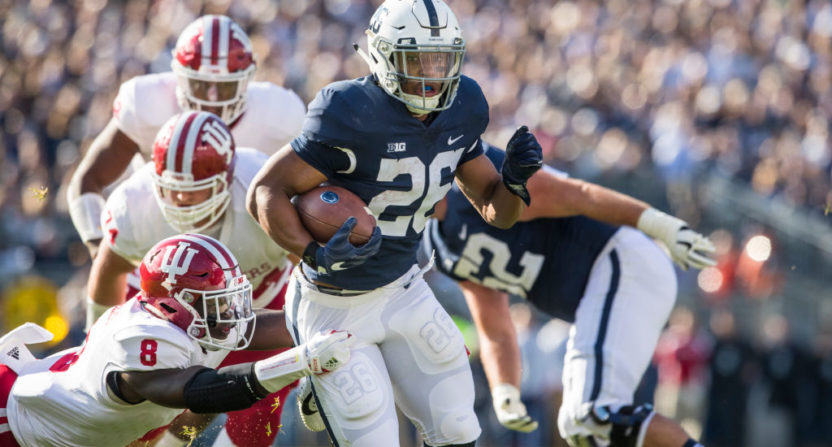 The tents are out in full force outside Beaver Stadium as the buzz for Penn State’s Saturday night home game against the Michigan Wolverines approaches. ESPN is setting up College GameDay outside of Old Main at the center of the campus, GameDay’s first trip to Happy Valley since 2009. To say Saturday night’s game has been a long time coming for this Penn State program is an understatement, but the importance of the game can not be oversold.

Penn State reached their bye week doing everything it needed to do to setup a key three-game stretch in the middle of the year that will either cement Penn State’s position in the College Football Playoff race or relegate the defending Big Ten champs to being in the running for a spot in the Outback Bowl. For a team that took a wild ride to the Big Ten championship and an appearance in the Rose Bowl last season and carried over playoff hopes into this season, a trip to the Outback Bowl or Citrus Bowl would be less than satisfactory given how the bar ha been raised.

For Penn State, the 2017 season was always expected to boil down to what the Nittany Lions would do against Ohio State and Michigan, which is typical when talking about teams in the Big Ten East. Going 2-0 against the Wolverines and Buckeyes likely means a team has an excellent chance to at least play for the Big Ten championship. This year, the schedule offered Penn State a breather before entering the most challenging three-game stretch any Big Ten team will have this season.

Penn State is coming off a bye week before hosting Michigan, and the timing of the bye week comes at a terrific time. The offensive line showed some weaknesses in their most recent game, at Northwestern, and a team like Michigan with Rashaan Gary at defensive end and linebacker Devin Bush has what it takes to make for a frustrating evening for even the best offenses if the offensive line is shaky. Getting a week to work on the offensive line concerns could be a benefit for Penn State. Ultimately, Penn State’s offense still is expected to have a better time than whatever Michigan rolls out with the football. Michigan’s offense has been a mess all season, and Penn State’s defense has been playing very well. If this turns into a race to 20 points, the advantage appears to be on Penn State’s sideline this week.

A win against Michigan will not come easily for James Franklin’s program, but the significance of winning the game would be little more than one hurdle cleared. Franklin has yet to beat Jim Harbaugh (0-2) or Michigan (0-3), making this one more item on Franklin’s to-do list to scratch off as Penn State looks to prove themselves worthy of being the No. 2 team in the country, as both the AP and coaches poll have determined. Franklin’s approach has been to treat each game as though the opponent is no different from Akron, but that would be nothing more than simple coach speak in this situation. Beating Michigan would be a big deal for Franklin and Penn State, and without a win against the Wolverines, the margin for error the following two games would be razor thin.

And the next two games are brutal.

After a night game at home against Michigan, Penn State hits the road to take on a revitalized Ohio State team coming off a bye week. Penn State handed Ohio State their only regular-season loss a year ago, and don’t think the Buckeyes have forgotten about it. The upset in Beaver Stadium effectively removed Ohio State from the Big Ten championship game, although Urban Meyer and the Buckeyes still advanced to the College Football Playoff ahead of Penn State. Meyer getting a week to prepare for a revenge game (which Meyer tends to thrive in) while Penn State is exhausting themselves against Michigan if a big advantage for Ohio State, with J.T. Barrett working his way into the Heisman conversation. Regardless of how things play out in Ohio Stadium next week, Penn State’s next challenge will be another road game against Michigan State. The Spartans have already taken out Michigan and have only suffered one loss so far, against a 5-1 Notre Dame. These Spartans are far better than they were a year ago, and a trip to East Lansing is no easy task for anyone who steps foot into Spartan Stadium in November.

If Penn State gets out of this 3-0, little may be standing in the way of a rematch with Wisconsin in the Big Ten championship game. Going 2-1 still keeps Penn State in the playoff picture given the precedent set last season, but 1-2 (or 0-3) and we are having a much different story about Penn State the rest of the season.

The Michigan game also offers a chance for running back Saquon Barkley to regain momentum in the Heisman Trophy picture. Barkley has elevated himself to being one of the leading contenders for the Heisman Trophy while others such as Sam Darnold of USC and Lamar Jackson of Louisville have taken their hits. The top all-around running back in the nation has piled up the yardage in a variety of ways and shown off some incredible skill to back it up, but Stanford running back Bryce Love has pulled even with Barkley on Bovada’s Heisman board after a continued surge in Pac-12 play. Barkley’s last two performances have lacked in the rushing yardage department, but Barkley’s Heisman campaign will likely have the same fate of Penn State’s playoff hopes in the next three weeks, starting with a big test against one of the top defenses in the nation.

The Heisman Trophy race is one built on momentum. Right now, Love has it out on the west coast, but Barkley will get a chance to regain it with three straight games against top 25 teams, all of which play a vital role in the Big Ten race and beyond. Michigan has the nation’s top-ranked defense. Michigan State is the fifth-best, and Ohio State is ranked 16th in the nation. If Penn State thrives in these next three weeks, Barkley will be a major reason why and doing so against these three defenses (with two on the road), Barkley will not only get a reserved ticket to New York City at the end of the season, but he will be in line to become Penn State’s second Heisman Trophy winner in school history.

But first, Penn State has a date with Michigan Saturday night. Three weeks from now, how will our outlook for Penn State look? Will they be in the same mix as Alabama and Georgia, or simply looking to play in another New Years Day bowl game at best?