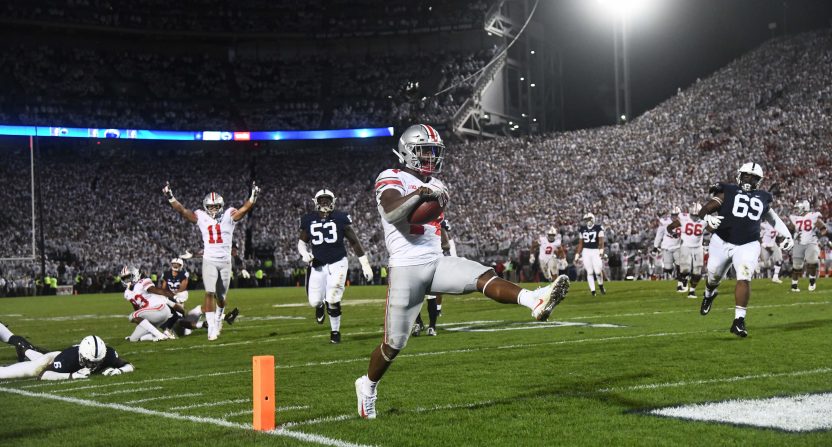 The two best teams in the Big Ten went head-to-head in front of a record crowd in Penn State’s Beaver Stadium on Saturday night, with the undefeated Ohio State Buckeyes managing to overcome a hostile environment, a fourth-quarter double-digit deficit, and one last gasp from Trace McSorley for a massive win early on in conference play. Just like in last year’s showdown in Ohio Stadium, Penn State failed to be able to slam the door shut on the Buckeyes, and Ohio State celebrated a wild one-point victory for a second-straight season.

Ohio State’s 27-26 victory over Penn State was sealed with a fourth-down stop which inexplicably saw McSorley handing off to running back Miles Sanders, who had been bottled up all night long. But the sequence of events that led to seeing Penn State be put in a position to need to convert a fourth down play happened in the blink of an eye.

Penn State took what felt like a commanding 26-14 lead on a short touchdown run by Sanders on the goal line on a drive that saw McSorley do it all in the clutch. A 21-yard pass here, a 19-yard run there, and a 10-yard run that was initially ruled a touchdown before instant replay correctly marked the ball down on the one-yard line. It was McSorley’s Heisman Trophy-worthy drive if only Penn State could’ve held on to the lead. But given the flow of the game at that point in time, a 26-14 lead with eight minutes to play still seemed to be a favorable spot to be in for Penn State. History, of course, offered a quick reminder that this was certainly not to be the case.

A year ago, in Ohio Stadium, Penn State held a 38-27 lead on Ohio State with 5:42 left on the clock. J.T. Barrett locked in for a drive that was aided by back-to-back Penn State penalties to cut the lead to 38-33. Penn State then went three-and-out and Ohio State took a 39-38 lead after a quick five-play, 58-yard touchdown drive with Barrett continuing to thrive. Penn State’s last effort to get into position for a potential game-winning field goal ended with McSorley throwing an incomplete pass on 4th & 15. Ohio State went on to play for and win the Big Ten championship, while Penn State had to settle for a trip to the Fiesta Bowl. That’s how important it is to finish a game.

On Saturday night, Penn State once again failed to drive the final nail in the coffin for Ohio State, and it cost them dearly.

Needing an answer after falling behind by 12, Dwayne Haskins quickly completed a pair of short passes to get a first down. A pass interference penalty on Penn State on the next play gave the Buckeyes 15 free yards and then, out of nowhere, Ohio State’s red zone threat at wide receiver Binjimen Victor pulled off an incredible touchdown run aided by poor tackling by Penn State’s defense, quickly changing the situation after a three-play drive that covered 75 yards and 6:42 still to play.

Now the game situation is much more tense, as Penn State once again needed to pick up some first downs and run some clock and get at least a field goal on the board. Instead, Penn State saw the ensuing possession result in a punt as Ohio State’s defense made it difficult for McSorley to get a first down in Ohio State territory. The punt pinned Ohio State down at the four-yard line, with the student section roaring in Haskins’ ears… for one play. On Ohio State’s first play from scrimmage, Haskins completed a screen pass to running back J.K. Dobbins, who followed a couple of good blocks and picked up 35 yards to get the drive started. The student section now less of a concern, Ohio State was in gear. Dobbins and Mike Weber helped power the drive on the ground and Haskins came up with a big third-down play with a 24-yard touchdown pass to K.J. Hill to give Ohio State a stunning lead.

Penn State stopped the two-point conversion attempt by the Buckeyes, meaning McSorley would get one last chance to lead Penn State to a major win at the end of September.

The drive started with some great promise as McSorley went right to the air for a 27-yard pass to Pat Freiermuth over the middle to get Penn State right into Ohio State territory, at the 48-yard line. But a sack for Ohio State and an incomplete pass quickly put Penn State in a 3rd and 14 situation. McSorley picked up nine of those yards on the ground as Penn State was in four-down territory. After a brief exchange of timeouts between the two sidelines, Penn State then attempted to execute either an awful play or one that was just snuffed out incredibly well by Ohio State with the game on the line.

Ballgame. Ohio State ran out the clock and went home with their perfect record intact, now accented by major wins away from home against TCU and now Penn State. The Buckeyes also took with them an inside track back to the Big Ten championship game, as it is expected they will not be losing many, if any games, the rest of the season. And for Penn State, a chance to prove they belong in the playoff conversation is put on ice and will have to wait for an opportunity to return to the table down the line. That’s the penalty when you once again fail to put your biggest threat in the rearview mirror.

For the time being, Ohio State has everyone in the Big Ten in the rearview mirror.