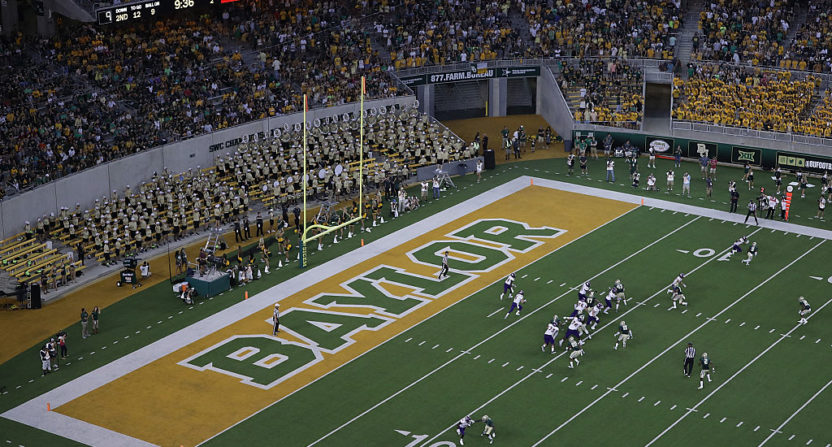 Hey, here’s a shocking Friday afternoon news dump out of Waco: yet another person who was involved with Baylor’s administration has said something ridiculously offensive about women, specifically women who have been sexually assaulted.

Via the Associated Press, here’s former Baylor interim president David Garland in an email exchange with another Baylor administrator. Garland served as Baylor’s interim president from June of 2016 through May of 2017, and serves as a professor of Christian Scriptures for Baylor’s seminary program. The relevance of that background will become apparent shortly.

Here’s some of the exchange in question, which came to light in a court filing:

Garland also said in the email that he had heard a radio interview with an author who chronicled her alcoholism at college, the Waco Tribune-Herald reports. He wrote in the email that the interview “added another perspective for me of what is going on in the heads of some women who may seem willingly to make themselves victims.”

He then cited verses in the New Testament referring to God’s wrath on those who commit sexual sin.

The plaintiffs in Wednesday’s federal court filing argue that it’s central to their case that Garland “would conclude that these young women made themselves willing victims of sexual assault” and “would then immediately find relevance in ‘God’s wrath’ upon them.”

Listen, I could write about ten paragraphs demonstrating how offensive that perspective is, but there’s no need. It’s right there in his own words. Let’s remember that Garland was elevated to interim president afterforced out along with Art Briles Baylor’s previous president (Ken Starr, because of course) was after the original stories broke.

It’s almost hard to believe there was (and perhaps continues to be) a systemic plague of sexual assault and other violence against women at Baylor.

At this point it’s clear the NCAA is probably not going to drop the hammer on Baylor athletics or even just Baylor football. But that’s kind of a shame, even if they would have eventually had to rescind those sanctions, and even if people like new head coach Matt Rhule aren’t really to blame. But this story just keeps getting worse, which shouldn’t even be possible.