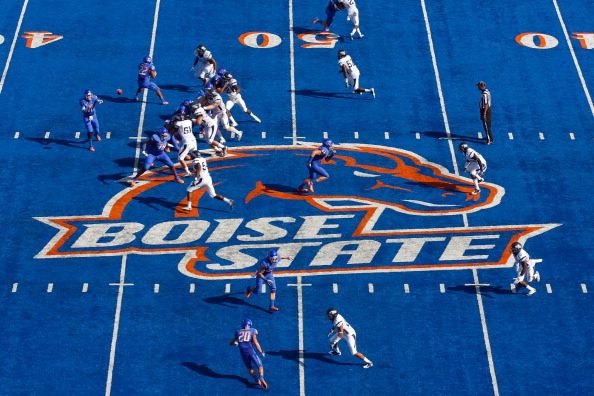 Derrick Boles was dismissed from the Boise State football team in February, for what the university referred to as a “violation of team rules.”

Well, it turns out that the “violation of team rules” was Boles biting off a piece of a teammate’s ear, and he faces felony charge for mayhem after being arrested May 9 in Polk County, Florida. Yeah, I’d say that all qualifies as violating team’s rules.

Here’s more, from the Idaho Statesman:

Boles was charged by the Boise Police Department for felony mayhem after a Feb. 12 incident in which he allegedly was in a physical altercation with another male at an East End residence, biting him on the ear and tearing a portion of it off. The man who was allegedly bitten was treated at a local hospital for non-life threatening injuries. A Boise State source said he is a current player on the team.

A warrant was issued April 4 for Boles, and he was arrested May 9 in Polk County, Fla., where he resides. The warrant has a $75,000 bond. Polk County records show Boles was released Sunday and is expected to arrive soon in Idaho to await trial.

“Our coaches hold our student-athletes to high standards as representatives of our teams, the University and the community. We educate student-athletes to make good decisions and treat all people with dignity and respect. This is part of our culture, and those who do not meet these standards will face consequences for their actions, including potentially losing the opportunity to compete for Boise State.”

Boles, 20, transferred to Coffeyville Community College in Kansas after getting kicked off the Boise State team. As a redshirt freshman for the Broncos, Boles was a reserve defensive tackle, and had 11 tackles, a sack, and four tackles for loss.

It’s safe to say that Boles’ college football career is a secondary matter now, as he could be in big, big trouble with that felony charge in Idaho:

According to Idaho statutes, mayhem is defined as “Every person who unlawfully and maliciously deprives a human being of a member of his body, or disables, disfigures or renders it useless, or cuts out or disables the tongue, puts out an eye, slits the nose, ear or lip, is guilty of mayhem.” The maximum punishment is 14 years in state prison.