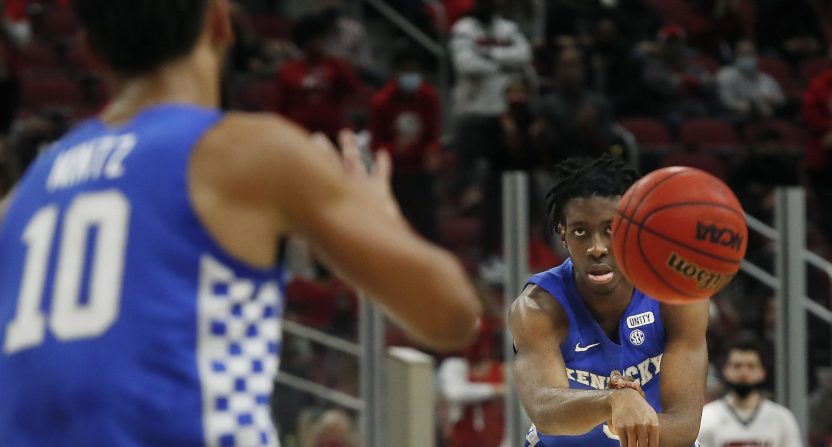 According to a report from Lexington, Kentucky CBS affiliate WKYT, former Kentucky Wildcats’ men’s basketball player Terrence Clarke has passed away at 19 following a car accident in Los Angeles. This came a month after Clarke had declared for the NBA draft, and only a day after he and former Kentucky teammate B.J. Boston had both signed with agency Klutch Sports. Here’s more on what happened from WKYT:

Sources tell WKYT Clarke and BJ Boston were leaving a workout in LA. We have been told Clarke died on the way to hospital.

Boston was reportedly in a car behind him. We don’t know details on what happened.

Rich Paul: "….Our prayers go out to Terrence and his family, who ask for privacy during this difficult time."

Clarke (seen above passing to Kentucky teammate Davion Mintz in a Dec. 26 game), a consensus five-star recruit out of Brewster Academy in New Hampshire, was a freshman with the Wildcats last season. He only played eight games with them, though, due to a right leg injury, and averaged 9.6 points, 2.6 rebounds and 2.0 assists in those games. But he was seen as having pro potential, and it’s awful to see his life cut short this way. Clarke’s passing led to tributes from many in the basketball world, including Boston Celtics’ coach Brad Stevens:

Brad Stevens said he just heard the Terrence Clarke news and isn't up to talking about tonight's game. He noted that Clarke is a Boston kid and that his son looks up to Clarke.

Here are some further tributes to Clarke:

RIP Terrence Clarke, no way bro. I spent some time w/this man in the gym – his mother was so lovely, so proud of her son. He was working so hard and was especially humble. I loved getting to know him and his journey. T-Clarke had the whole world at his fingertips. This isn’t fair

My heart is extremely heavy right now! 🥺 HUG YOUR LOVED ONES! Prayers up to my man Terrence Clarke’s Family! ❤️ MUCH LOVE BRO! #riptclarke

Terrence Clarke was my first ever interview in this business back in 2016. We built a tight relationship, he called after every single offer and always asked me how he can get better.

An elite competitor, a winner, and more importantly an amazing friend.

Our thoughts go out to Clarke’s friends and family.