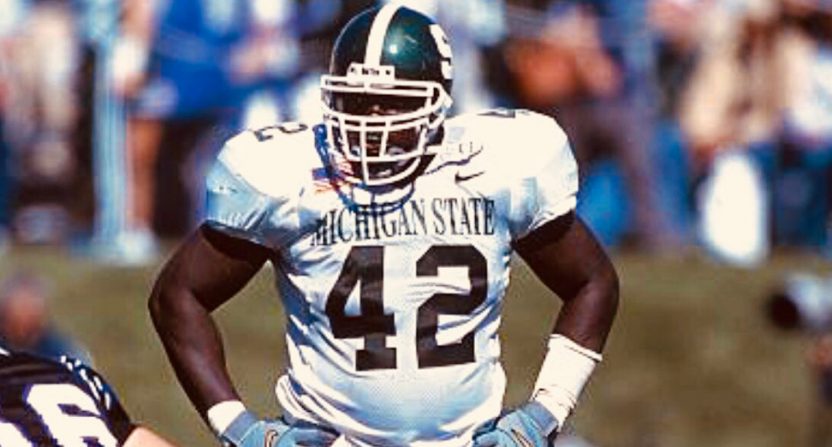 There’s another story of a former football player dead all too young. This time, it’s former Michigan State, NFL and CFL defensive lineman and linebacker Mike Labinjo. Former Michigan State teammate Little John Flowers appears to have broken the news Saturday morning, adding that Labinjo died in his sleep, and Labinjo’s former CFL team, the Calgary Stampeders (he played with them from 2007-11), confirmed the news with a statement later Saturday:

It is with great sadness the Stampeders learn of the death of alumnus Mike Labinjo. He was 38.

“We are deeply saddened to learn of Mike’s death,” said Stampeders president and general manager John Hufnagel. “He was a big man with a big personality to match and he was a key part of our Grey Cup championship team in 2008. The team offers its condolences to Mike’s family and friends.”

…An alumnus of Michigan State University, Labinjo was part of the Stamps’ Grey Cup-winning team in 2008 and was a standout in the West final victory over the BC Lions that year, recording three sacks and a forced fumble and making two touchdown-saving stops as part of a critical goal-line stand.

He followed up that performance with three tackles, a sack and three knockdowns in the Stamps’ Grey Cup victory over Montreal.

Labinjo, a Toronto native, played for Michigan State from 2000-03, and he was named an honorable mention All-Big Ten selection and the team’s defensive MVP in his senior year. He led the Spartans in sacks in 2001 and tied for the team lead in interceptions in 2003, and remains ninth in team history in tackles for a loss with 35. While he went undrafted in the 2004 NFL draft, he spent three years in that league with the Philadelphia Eagles, Indianapolis Colts and Miami Dolphins, and played in 10 NFL games, including the Eagles’ 2004 Super Bowl loss to the New England Patriots.

Labinjo then went north to join the Stampeders, who had selected him in the third round of the 2003 CFL draft. He posted 61 defensive tackles (with nine tackles for loss), seven special-teams tackles, six sacks, seven knockdowns and two fumble recoveries in his years with them. As per the Stampeders’ statement, he remained in Calgary after his playing career, working at Solengo Capital and FirstService Residential. There are plenty of tweets in tribute to him from former teammates, opponents, fans, executives, and journalists:

Terrell Owens told me to my face that Mike Labinjo was “the most impressive athlete” he’d seen play Football. Sad day. RIP Binj.

Sad news to hear the passing of fellow @MSU_Football alumnus and former CFL star Mike Labinjo. A true inspiration to many as he grew up in Toronto. My condolences to the family, friends, teammates, coaches, and many others. Rest In Peace Mike.

RIH to Mike Labinjo!! Was fun playing against you and seeing that big smile on your face. Prayers up to his family

Heartbroken to learn of the passing of former CFL and NFL player Mike Labinjo at the age of 38. Mike was as great a high school football player as Toronto has known. Later starred at Michigan State. RIP my friend.

OBIT: Sad to report that former @calstampeders Mike Labinjo has died. Labinjo was a member of the 2008 Grey Cup champions and spent four years with the Stampeders. He passed away in his sleep this morning in Calgary at age 38. #rip

The St. Michael’s College School community has been saddened by the passing of Mike Labinjo ‘99. Mike was a star player with the Kerry Blues football programme before joining Michigan State. He had a successful career in both the @NFL and @CFL. Our prayers are with his family.

Hearing that Mike Labinjo died is a serious blow to this Stamps fan. His performance in the West Final of 2008 allowed me to cover my first ever Grey Cup game. He died far too young, doubly sobering as he was a year younger than me.

Very sad to hear of the death of Mike Labinjo who passed away in his sleep at age 38. I remember being the first to write about him as a teen @SMCS1852 and chose him Toronto all star before his @CFL @NFL career. RIP “Binjo”

RIP My Boy Mike Labinjo…It is with a heavy heart that I received news that one of my IKEI WARRIORS has gone to be with God. Mike who we knew as “Binjo” was a part of my very first NFL Draft Preparation Class 14 years ago and my only Canadian athlete to play in the NFL. He was such a fun & loving person who we truly enjoyed having around our family. You left us way to early but God needed your strength & humor in heaven. We will miss you my boy and prayers will be with your family & friends. Rest in paradise alongside my Dad. #ikeiallday #ikeiwarrior

Our thoughts go out to Mike’s friends and family.