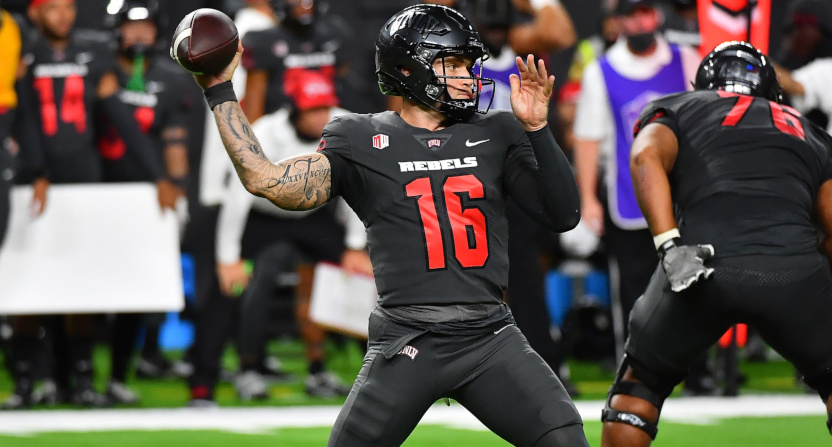 There are many athletes who have taken unconventional paths over their collegiate career, but even by those standards, Tate Martell stands out. And now, he’s made yet another interesting and unusual move, announcing Tuesday through Las Vegas sports reporter Joe Arrigo of Franchise Sports Media that he plans to retire rather than play more for UNLV:

I wanted to give an update on #UNLVfb QB @TheTateMartell: He is retired from football and focusing on business ventures.

He is grateful for @coacharroyo and UNLV for giving him a chance.

I would also keep an eye on what tate has going on business wise, it's about to blow up.

Martell played three high school seasons at Nevada powerhouse Bishop Gorman (with one of those documented in Verizon go90 docuseries QB1: Beyond The Lights, which later moved to Netflix), then graduated early from Desert Pines High School and enrolled early at Ohio State. (That itself marked a transition; he initially committed to Washington at 14, then switched to Texas A&M, and then picked Ohio State, with Scout rating him as a five-star recruit when he came in.) However, he couldn’t beat out Dwayne Haskins there, and he then transferred to Miami after Justin Fields transferred in.

At Miami, Martell played both quarterback and wide receiver in 2019. He then sat out the 2020 season after a suspension, then transferred to UNLV in 2021. But he only threw six passes for the Runnin’ Rebels this season, completing two. (He’s seen above playing for them in a September 2021 game against Ohio State.) And now, apparently, he’s moving on from college football to the business world. We’ll see if this new venture does in fact “blow up” the way Arrigo is projecting.