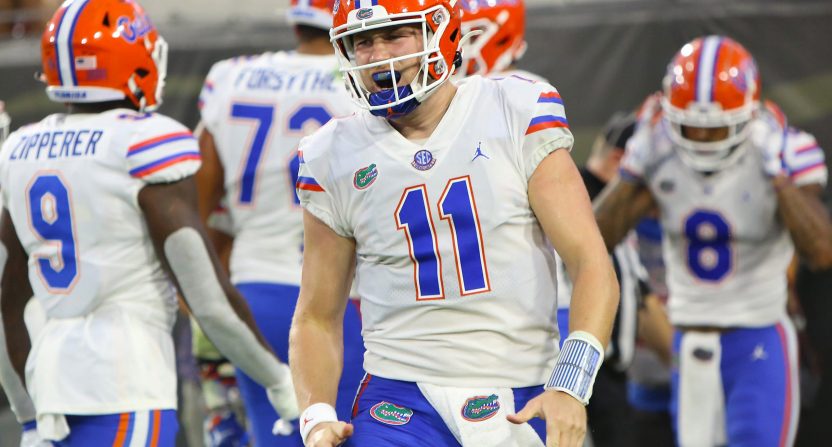 The No. 8 Florida Gators put together an impressive performance to knock off No. 5 Georgia 44-28 on Saturday in Jacksonville. Here are our main takeaways from the SEC showdown:

This game showed off the brutality of football

Unfortunately, the injuries suffered in this one may be the bigger story than the actual football game between two top-10 teams.

In the first quarter, Georgia freshman wide receiver Marcus Rosemy-Jacksaint suffered a horrific ankle injury on a touchdown (and CBS for some reason kept showing the replay).

And in the second quarter, Florida superstar tight end Kyle Pitts took a massive hit to the head from Georgia defensive back Lewis Cine, who was ejected for targeting. Pitts left the game and didn’t return, and Cine also looked out of it after the brutal collision.

Georgia DB Lewis Cine kicked out of the game after being called for targeting for this brutal hit to the head on Kyle Pitts. pic.twitter.com/orvmCMl3r7

Hopefully Pitts is okay for his own personal well-being of course, but also because he’s an incredible football player and potential top-10 pick in the 2021 NFL Draft. The 6’6″ tight end showed off his ridiculous skills on two catches in the first half, one of which was a touchdown.

The Florida playbook should just be "Throw a jumpball to Kyle Pitts." pic.twitter.com/Tl7pomqBEF

As we said earlier… pic.twitter.com/Latgz19Q0T

The Florida offense put up insane numbers in the first half

Kyle Trask and Trevon Grimes connect for a Florida TD on this great throw and catch.

The Gators' offense is rolling. 38-21 at halftime, and 341 passing yards from Trask. pic.twitter.com/3dmQC11dCP

Kyle Trask is putting in work … and it's only the first half! pic.twitter.com/BaOeT5llYi

Trask finished the game with 474 passing yards (11.0 AVG), four touchdowns, and one interception. 10 different Florida players had at least one reception and at least 12 yards.

For Trask, this was a huge game to show off to NFL organizations; the 6’5″ senior has been viewed as a potential first or second-round pick in next year’s draft. And he should also be in the Heisman conversation after this performance.

Georgia actually got off to a fantastic start

What made Florida’s 17-point halftime lead (38-21) even more incredible was that they were actually trailing 14-0. Georgia even scored on the first play from scrimmage, when Zamir White ran for a 75-yard touchdown.

Georgia was in the thick of the CFP race entering this game. But that path has seemingly been erased now with two losses, and after being thoroughly outplayed by Florida. They also have zero games remaining against ranked teams.

Florida, meanwhile, now has a very real shot. The Gators have one loss, which was by only three points against a Texas A&M team that is now ranked seventh. Florida has a strong chance to win out, with games remaining vs Arkansas, at Vanderbilt, vs Kentucky, at Tennessee, and vs LSU.

Basically, Saturday’s game was a must-win game for each team, and it was the Gators that got it done.