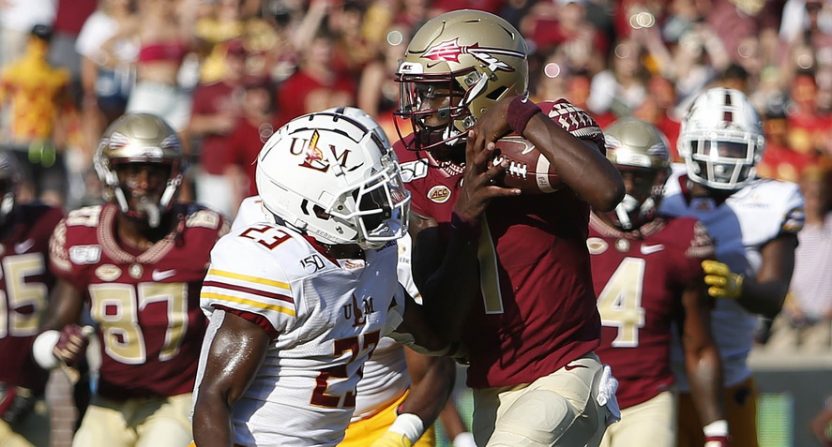 Florida State may have picked up their first win of the season Saturday night in Tallahassee, but few fans of the Seminoles will be smiling about what transpired. Florida State was once again handled after halftime and needed a missed extra point by Louisiana Monroe to win in overtime, 45-44.

It took Florida State six plays to open overtime with a touchdown run by Cam Akers (who was a monster with 193 rushing yards and two touchdowns when his team needed it the most). But ULM answered with a quick three-play score in overtime. Caleb Evans did the honors with a five-yard run, the fourth combined touchdown of the night for the ULM quarterback. All that was left was to kick the extra point and try their luck in the second overtime, or go for two and the win. ULM opted to kick the extra point. It would be their biggest mistake of the night.

This missed extra point in overtime gives Florida State the win as the Warhawks come up just short in their upset bid. pic.twitter.com/EagedotvkH

We already know these aren’t your daddy’s Noles. Florida State had their bowl streak snapped last season, and the second year under head coach Willie Taggart got off to a bruising start last week when the Seminoles choked away a game against Boise State. The fact we’re talking about the Noles needing to escape a home game against ULM is something that would’ve been unbelievable even five years ago, but such is the case.

A win is a win, but some wins are better than others. Florida State racked up 500 yards of offense in the overtime victory. That’s good! But the WarHawks forced three FSU turnovers and controlled the football for 45 minutes. That’s bad. FSU was also flagged for 11 penalties in the game (very bad), and was outscored after halftime 31-14 before heading to overtime (also bad trends). After being outscored 17-0 by Boise State last week, Willie Taggart suggested his team was dehydrated in the second half. So what will the excuse be this time? Over-hydration?

Of course, you have to wonder why ULM opted to kick the extra point and play for double overtime. The popular opinion seems to be a team dominating the game playing the role of underdog would be wise to go for two points. Considering how effective ULM was moving the football on a drained Florida State defense, not going for two certainly felt like a mistake even before the missed extra point.

Just going to put this out there on Willie Taggart’s buyout. pic.twitter.com/kUisT322v8

A loss at home to ULM would have been truly ugly for Florida State, and even the dwindling number of Taggart supporters would have a difficult time defending the results on the field over the past year. Clearly, Florida State has a way to go before even thinking about challenging Clemson in the ACC again. For now, the bar is far lower than beating Clemson. Florida State has to prepare for their first road trip next week against one of the top teams in the ACC Coastal Division, Virginia. For the first time in the history of their series, Virginia should be the favorite against Florida State.

Entering Week 3, Florida State is still very much a massive work in progress at best.