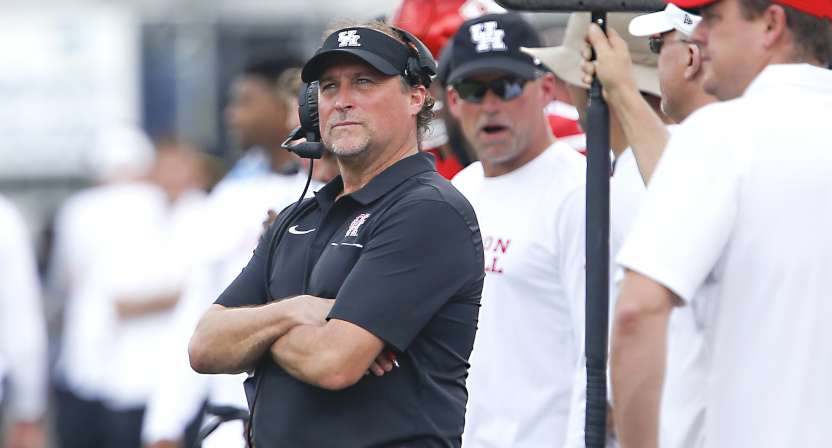 The 2020 college football season has seen a large number of postponements or cancellations each week due to positive COVID-19 tests at one or both participating schools, and Week 4 is no exception there. The Notre Dame-Wake Forest game went down Tuesday, and Wednesday saw the news that North Texas-Houston, USF-Florida Atlantic, and Arkansas State-Tulsa have now been canceled or postponed.

Breaking news — North Texas' game at Houston has been canceled.

Saturday’s Tulsa at Arkansas State game has been canceled, sources confirmed to @Stadium because of COVID issues with ASU

It’s particularly interesting to see North Texas-Houston go down, as that’s the fourth-straight season opener that the Houston Cougars have had cancelled thanks to COVID-19 test results from the other team. The Houston team (head coach Dana Holgorson is shown above on the sidelines against UCF last November) previously saw games against Rice, Memphis and Baylor cancelled. And that Baylor cancellation (a game scheduled to be last week’s featured noon Eastern game on Fox) drew a lot of interesting discussion, especially from this piece from Max Olson at The Athletic Tuesday on how that went down. A few selected highlights:

…As one Houston source put it, “If we knew we had a problem, we would’ve been transparent and said we’ve got some positives, we’re maybe short on offensive linemen, we got this conference deal that may sneak up on us on a position, here’s where we’re at.”

…“Certainly Monday, we felt very good about it. Tuesday, we felt very good about it,” [Baylor AD Mack] Rhoades said. “Wednesday, we felt pretty good about it. And then all of a sudden Thursday, we weren’t so sure. And that’s when we reached out. So I think we, Baylor, have been extremely transparent and up-front. I’m grateful to the way Louisiana Tech handled it with us and I think and hope we did the same with Houston. And, you know, we would expect the same of any opponent that we’re playing. So we’re gonna continue to be transparent and give as much of a heads up as you possibly can.”

This whole season has seen a remarkable amount of postponements or cancellations. And those have been particularly hard for schools in the American Athletic Conference, as Bryan Fischer noted Wednesday:

It’s definitely interesting to see more games going down. And this is only Wednesday; we’ll see if any further games drop off the Week 4 schedule before Saturday.