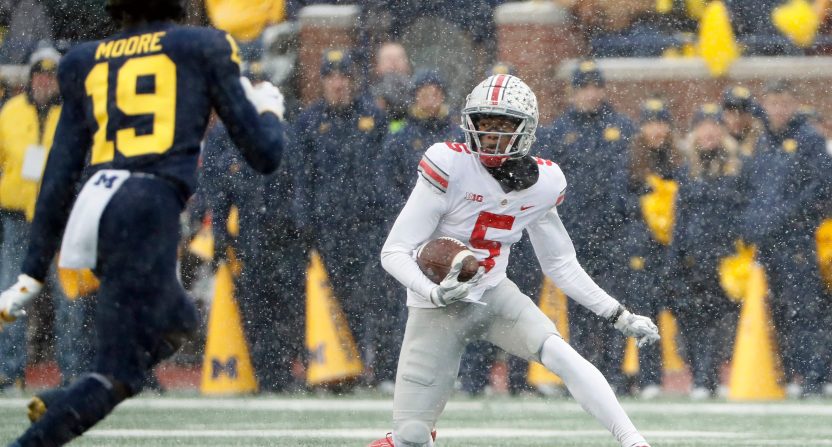 The Ohio State Buckeyes will take on the Utah Utes in the Rose Bowl, but they won’t have many of their top players there in Pasadena with them.

Star wide receiver Garrett Wilson announced Monday that he would be going pro and start preparing for the NFL Draft, which means he won’t be playing in the Rose Bowl.

It’s been a special 3 years… To Buckeye Nation with love. ✌🏾 #NFLDraft pic.twitter.com/FRKHTwNEwj

“I want to start this off by thanking you all from the bottom of my heart,” Wilson wrote. “These last three years have been unforgettable and becoming a Buckeye has been the single greatest decision of my life. I would like to thank my teammates, trainers, and our entire coaching staff – Coach Hartline, Coach Day, Coach Mick, and Coach Nico, thank you. I wouldn’t be in this situation without each and every one of you.

“To my family, thank you for your unconditional love, guidance, and support. This journey has been a lifetime in the making and after careful consideration, today, I am excited to start the next chapter by declaring for the NFL Draft.”

Wilson finished the regular season with 1,058 receiving yards and 12 touchdowns for the Buckeyes and he is expected by many to be a Top 15 pick.

Wilson was not the only Buckeye to forego the Rose Bowl on Monday. Head coach Ryan Day also announced that WR Chris Olave, OT Nicholas Petit-Frere, and DT Haskell Garrett all would skip the game as well.

As you might imagine, the announcement was met with some very strong reactions on Twitter from the college football world.

Wilson reminds me a lot of Stefon Diggs coming out of Maryland. Identical body type, creative and detailed route runner, strong hands, and has exceptional body control at the catch point. https://t.co/iNuuE5gRcB

Quite possibly the best CenTex athlete these eyes have ever seen. In a basketball region final, Garrett was best player on the court and had 36 points vs a Westlake team with 4 Division I recruits including Baylor's Matthew Mayer. https://t.co/RET9XN19qM

This is real. For people old enough to remember what it meant, it’s sad.

But put yourself in Garrett Wilson’s position. He wanted to win a national title, now is going to be a first-rounder and didn’t grow up dreaming of the Rose Bowl.

One of the great receivers in Ohio State history. @GarrettWilson_V's gonna be a fantastic pro. And no need for the rest of the conference to worry, @brianhartline's pipeline has got a whole bunch more coming. https://t.co/wtfNBH2JzT

So many great Garrett Wilson moments at Ohio State but this is one of my favorite pictures of him. He’s going to dominate in the NFL! pic.twitter.com/dGCiEUNDPK

Ohio State will put its best foot forward with whoever it has left against Utah on January 1.