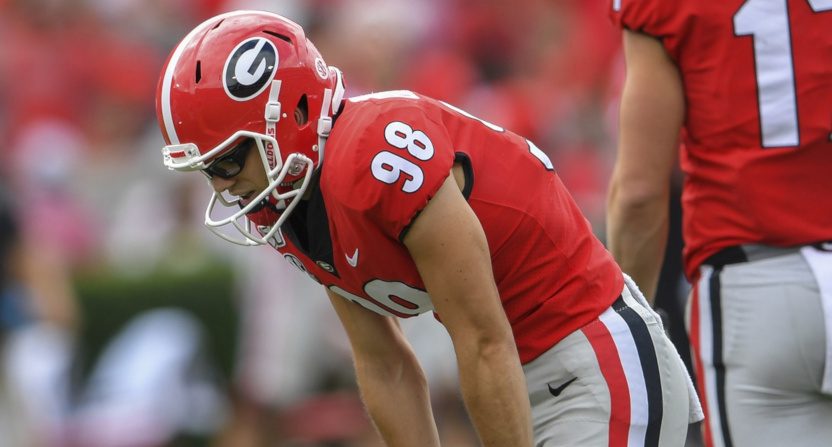 Twice the overtimes, twice the pain. No. 3 Georgia was supposed to walk their way through the SEC East, with the possible exception of a game against Florida later on. But a path back to Atlanta for another appearance in the SEC Championship Game just got a little bumpier Saturday afternoon after the Bulldogs lost 20-17 in double overtime at home to South Carolina.

It was absolutely the worst time for reliable kicker Rodrigo Blankenship to miss not just his first field goal attempt of the season, but his second as well. None would be more defeating than his second blown field goal attempt. Needing to convert on a 42-yard kick to send the game to a third overtime, Blankenship pushed the kick wide and sent South Carolina’s players into a frenzy between the hedges.

The range of emotions on display was pretty wide.

Pretty special: Ryan Hilinski throwing up the No. 3 for his brother after the South Carolina victory. pic.twitter.com/Wj28fHpvOi

It’s been a rough week for some sports fans in Georgia.

South Carolina fans certainly had reasons to breathe a huge sigh of relief. The Gamecocks nearly blew their chance to win this game multiple times late in the game. With South Carolina leading 17-10, a phenomenal interception by Israel Mukuamu allowed the Gamecocks a chance to work the clock and maybe tack on a few more points.

South Carolina was forced to punt the ball back to the Bulldogs after that, but the interception was certainly terrific. But there were some challenges ahead for the Gamecocks. Still holding a seven-point edge, it appeared South Carolina came up with a fourth-down stop late in the fourth quarter, but a defensive holding penalty gave new life for Georgia. And Bulldogs’ quarterback Jake Fromm cashed in on the gift.

With one final chance to win the game in regulation, Gamecocks’ head coach Will Muschamp made the questionable call to send his field goal kicker out for a 57-yard attempt instead of trying to convert on a 4th & 3 from the Georgia 40-yard line. Needless to say, things did not end well in this particular moment.

Fortunately for South Carolina, Georgia was unable to move the football into position for their own shot at a game-winning score and to overtime we would go. And things got off to a great start for the upset-motivated visitors. Fromm was intercepted by Mukuamu on the second play of the first overtime (the third pick he threw on the day), but another missed field goal by the Gamecocks sent this to a second overtime. After finally taking the lead with a field goal, South Carolina was one missed field goal away from celebrating a long-awaited victory against a top 5 team on the road.

South Carolina closed as 21-point underdogs, according to Caesars Sportsbook, making its win at No. 3 Georgia the largest upset in an SEC game since 2014 when Texas A&M took down No. 3 Auburn. pic.twitter.com/aHGtZnFIoi

The script was there for another upset bid to go down in flames, similarly to how UNC couldn’t quite pull off the feat last week against Clemson. But that didn’t happen this time, and South Carolina’s win has the chance to change things in the SEC.

The Gamecocks may not figure into the SEC East race as the season progresses, but they certainly made things dicier for the defending division champs. Georgia is now firmly in a race for the division crown. And they don’t have a head-to-head tiebreaker with South Carolina, of all teams. The Bulldogs, for the moment, are trailing Florida and Missouri in the division standings. And the Gamecocks are just one game behind.

Odds are Georgia is still the team to beat in the division, but the schedule still has a neutral site game against rival Florida, a road game at Auburn, and a home game against Texas A&M. With the margin for error likely eliminated, the Bulldogs may be in a position where it could have to run the table the rest of the way in SEC play just for a shot at the conference title. And as for the College Football Playoff, this loss is a stinger but far from an eliminator. There is still a lot of football to be played, but Georgia is going to have to climb their way back into the conversation with some big wins.