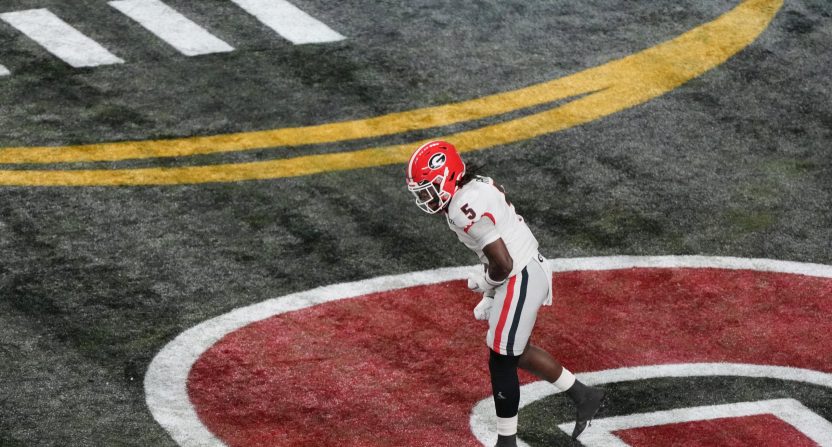 While the first half of the College Football Playoff National Championship between the Alabama Crimson Tide and Georgia Bulldogs was a field goal fest, the second half opened up with both teams trading touchdowns.

Georgia was able to pull ahead of Alabama in the fourth quarter despite a wild fumble that led to a Tide touchdown. Clinging to an eight-point lead, the Bulldogs fought back to prevent Alabama from driving down the field late for a chance to score a touchdown and tie the game with a two-point conversion. Well, it never happened because Heisman Trophy winner Bryce Young launched a ball deep downfield that landed in the waiting arms of Georgia’s Kelee Ringo, who promptly returned it all the way down the field for a pick-six touchdown to ice the game and the national title.

Georgia’s lead was extended to 33-18, essentially putting the game out of reach despite a late effort by Bama.

For Georgia, the interception run was the culmination of a season in which they were the No. 1 team in the nation for much of it before losing to Alabama in the SEC Championship Game. However, they found redemption in the CFP, beating Michigan easily and then outdueling Nick Saban and the mighty Tide when it mattered most.

As called on Georgia radio: pic.twitter.com/V87mHUL6Zh

Stetson Bennett in tears after that Georgia pick-six pic.twitter.com/u05HPLKDOS

Take a bow, Georgia fans. The drought is finally ending.

Must say, pretty impressive vertical from Georgia’s ⁦@KirbySmartUGA⁩. It’s a night for the Dawgs … pic.twitter.com/wIh0BOiGFw

And here's the Georgia radio call as the clock ran out. #CFP 🏈 pic.twitter.com/ibo6HA9Cxm

Congrats to the Georgia Bulldogs on their first national title since 1980, doing it exactly the way they’d wanted to.