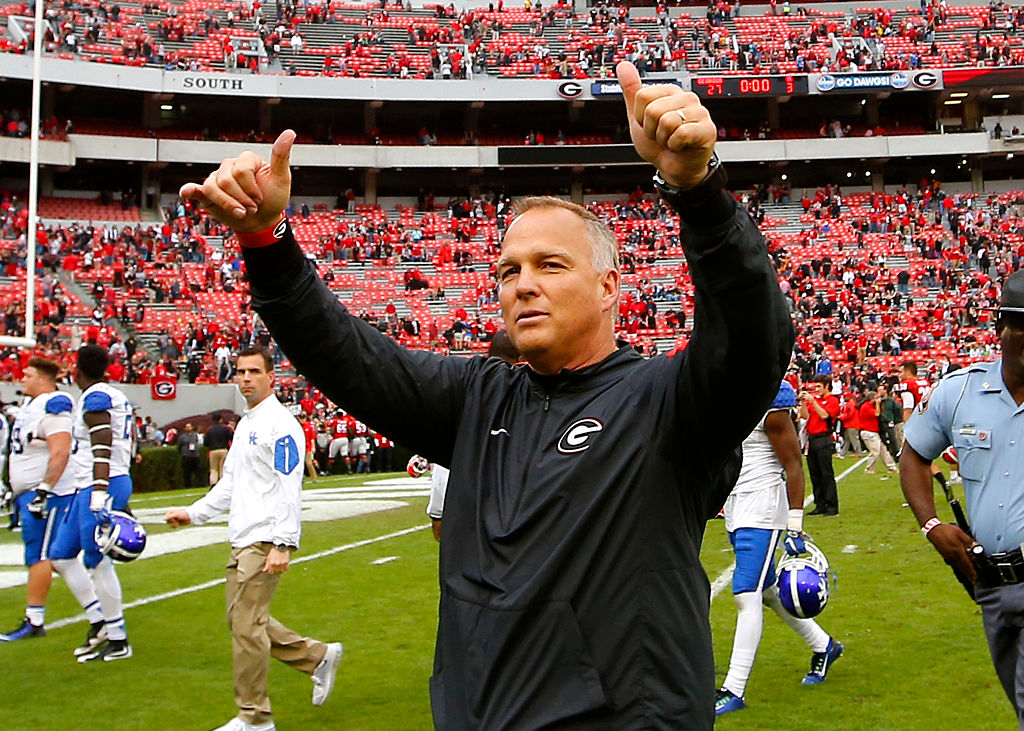 There’s an old adage that goes, “be careful of what you wish for because you just might get it.”

That’s what happened in Athens, Georgia, on Sunday.

Despite finishing with a 9-3 record – which is no small accomplishment considering that Dawgs lost their top running back midway through the season – the University of Georgia decided to part ways with Mark Richt.

I used the term “parted ways” because there’s some dispute about whether Richt resigned or was actually fired.

Regardless of who made the decision, the outcome is disappointing. As I’d written earlier in the season, Mark Richt was the right man to lead the Georgia football program.

Make no mistake about it: Richt was one of the most successful coaches in school history. In his 15 seasons ‘Tween the Hedges, he guided the Dawgs to a 145-51 record, five berths in the SEC Championship Game, and two conference championships. He ranks second in school history in wins (145) and third in winning percentage (.740). His win-loss percentage ranks sixth among active head coaches with more than 10 years of experience, trailing only Urban Meyer (.850), Chris Petersen (.815), Bob Stoops (.799), Nick Saban (.762), and Gary Patterson (.751).

Yet, he’s no longer the head coach at Georgia.

This shocking turn of events doesn’t make any sense to me. Sure, some fans will argue that Mark Richt should be gone because he couldn’t win the big one. While that seems perfectly logical, it’s worth noting that people used to say the same thing about Tom Osborne, Bobby Bowden, and of course, legendary UGA coach Vince Dooley after they’d all been at their respective schools for 15 years.

However, instead of listening to all of the armchair quarterbacks and making a knee-jerk reaction, the schools mentioned above — Nebraska, Florida State, and Georgia — decided to stick with these coaches. Each of them responded by winning at least one national championship.

Consider Georgia: Vince Dooley coached from 1964 through 1979 without winning the big one. Then came a man named Herschel Walker. In 1980, Georgia won the national championship, capped by its victory in the 1981 Sugar Bowl over Notre Dame.

The moral to the story: patience pays off. It’s a shame that the UGA brass didn’t give Richt the opportunity to do so. Given that his winning percentage exceeded that of Dooley, the all-time wins leader at the school, he had certainly earned that opportunity.

Let’s be honest: When viewed through the lens of annual consistency, Richt’s tenure was far more successful than Dooley’s was. As UGA’s most beloved football coach, many fans are of the impression that Dooley’s Dawgs competed for the SEC championship every season. That was not the case. In fact, Georgia finished fifth or lower in the league standings in 9 of his 25 seasons in Athens.

By contrast, Richt’s teams were usually in the mix for the SEC crown, finishing 2nd or higher in the division in 10 of his 15 seasons.

You tell me: which coach was more successful? Which coach should have been given the boot after year 15, and which one should have stayed?

Sadly, this doesn’t matter to a lot of Georgia fans. In their minds, it was time for Richt to go, despite that fact that he has the best winning percentage of any Dawg coach since the Poll Era began in 1936.

To those fans, I say, be careful what you wish for.

Nebraska fans know exactly what I’m talking about. Unhappy that Frank Solich wasn’t winning national championships every season like predecessor Tom Osborne did during the final years of his career, the Cornhuskers decided to fire him after a 9-3 season. This move raised more than a few eyebrows at the time because Solich had won more games (58) during his first six seasons than legendary Husker coaches Osborne (56) and Bob Devaney (53).

Despite his impressive record, Nebraska decided it needed a coach that could “win the big one.”

Twelve seasons later, it’s still looking for that same coach. During that span, the Huskers have endured three losing seasons and are 0-5 in conference championship games.

Interestingly enough, Nebraska still hasn’t learned its lesson, as it fired Bo Pelini after a 9-3 season last year because hadn’t guided the team to a conference title. The Huskers limped to a 5-7 record this fall under new coach Mike Riley.

Will this happen at Georgia?

That’s tough to say. While I openly question Mark Richt’s firing, I don’t think the school would have made a move without having a proverbial ace up its sleeve. However, as noted above, only five coaches with 10 or more years of experience have a better winning percentage than Richt. Unless the Dawgs can lure one of those coaches away (which seems highly unlikely), they’ll likely go after a relatively new head coach or one of college football’s top assistants.

In other words: UGA is taking a calculated gamble rather than making a “home run” hire as many fans are expecting. Anytime someone takes a risk, it might work or it might go horribly wrong. If it’s the latter, the school will rue the day it decided to get rid of Richt, who was a class act both on and off the field, one of the most decent and respected men in a ruthless profession.

Regardless, it’ll be interesting to see how this all plays out over the next few years.

If Georgia hires the next Mike Riley or Bill Callahan, it won’t play out very well.