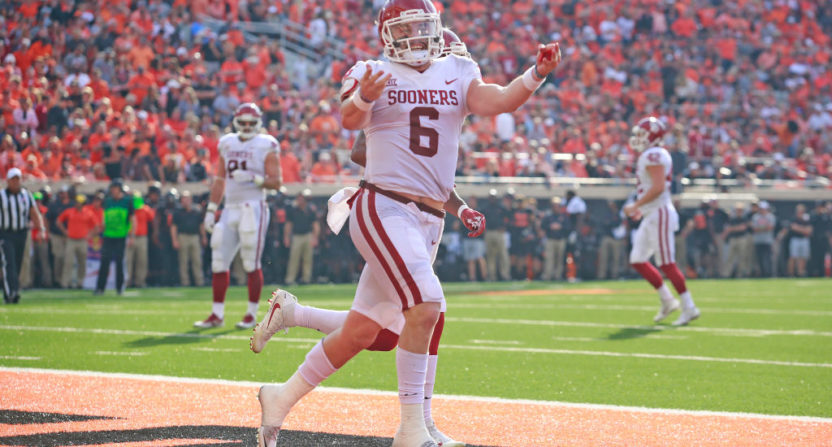 In 2016, the University of Michigan made a somewhat bizarre announcement regarding its apparel deal with Nike. As part of the new contract, Michigan would become the first university to have its athletics programs outfitted in apparel from the Jordan Brand, which is produced by Nike. As such, the awkward blending of a football uniform with the iconic image of Michael Jordan flying through the air on his way for a dunk became an instant joke, especially at the height of the Crying Jordan meme. But all jokes aside, this was a great business deal for both sides.

Nike got the chance to expand the Jordan Brand’s visibility by pairing up with one of the biggest brands in college sports, at a time when the Michigan football program was surging under the leadership of Jim Harbaugh. It was a match made to be and paid dividends for each side of the deal. This year, the Jordan Brand expanded their reach with a natural and obvious partner, Jordan’s alma mater of North Carolina.

The Jordan Brand had been working with a number of colleges for basketball uniforms prior to these landmark deals, but it was the deal struck with Michigan and the North Carolina that changed the game for the Jordan Brand. The influence in the world of college basketball was a natural fit, but breaking out on a football uniform was a real game-changer for the brand and the uniform game overall. Now, in addition to Nike’s flagship product, Adidas and Under Armour, one of the most popular brands on the rise was kicking its way through the door for a piece of the college football pie. And the Jordan Brand is ready to continue filling up its plate.

Only a select few get to wear @Jumpman23.

So where does the Jordan Brand go from here? As they say, the ceiling is the roof.

On the collegiate level, Jordan Brand is just getting warmed up. Now with partners in the Big Ten (Michigan), ACC (North Carolina), and Big 12 (Oklahoma), the Jordan Brand can scout the field to see where it will be best to break foot inside the last of the remaining power conferences, the SEC and Pac-12. And given the precedent already set by their existing deals, there is no reason to suggest the Jordan Brand won’t line up with one of the biggest names in either conference at some point in time.

Nike has a gigantic list of schools to choose from. In the SEC, Nike has deals in place with Alabama, Arkansas, Florida, Georgia, Kentucky, LSU, Missouri, Ole Miss, Tennessee, and Vanderbilt. In the Pac-12, Nike has contracts with Arizona, Cal, Colorado, USC, Oregon State, Washington, Washington State, and of course, Oregon. So Nike has a good list of schools to choose from. But which school would be the best fit for being the first Jordan Brand partner in either conference?

It’s fairly safe to assume Nike and the Jordan Brand would want to go big with their first partner in either conference. Michigan is one of the biggest names you will find in the Big Ten. The same is true of North Carolina in the ACC and Oklahoma in the Big 12.

Could Jordan Brand land Alabama in the SEC, or would another program make more sense? The fun that could be had with Kentucky wearing a Jordan logo for UNC fans would be endless, but the Wildcats would seem to make some sense. But Kentucky isn’t quite the draw in football that would benefit the Jordan Brand. The most likely candidate in the SEC could actually be Florida, even though the football product may leave something to be desired right now. Florida could potentially be a great fit for what the Jordan Brand would seek. And if Florida passes, then Tennessee would be wise to swoop in and land the deal themselves. The football program is still a valuable asset and the Lady Vols are one of the powers in women’s basketball. There is much to like about the Vols as a possible Jordan Brand partner in the future, and Tennessee is one of Nike’s newest partners after the school ditched Adidas in 2015.

Orgeon may feel like the easy answer for some given how much Nike has experimented and used Oregon to roll out new ideas over the years, but the Jordan Brand is going for the top brands in each conference and nobody in the Pac-12 stacks up with USC in this department. Remember, UCLA is out of the picture because they are a top partner of Under Armour. So what better way to combat UCLA and Under Armour than by going with the crosstown rival that just so happens to be the top football brand in the entire city of Los Angeles (sorry Rams, not sorry Chargers). There is simply no better option for the Jordan Brand when it comes to the Pac-12. It’s USC or bust.