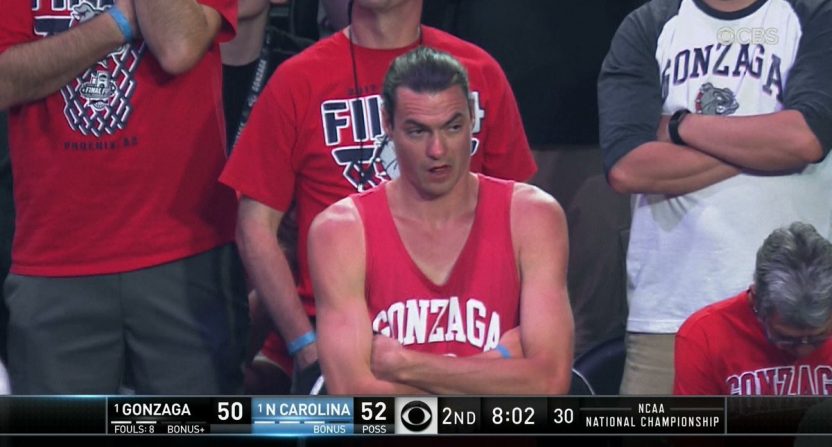 Before this year’s Gonzaga team’s run to the national championship game (which they eventually lost 71-65), one of the biggest national memories of the school was star forward Adam Morrison breaking down in tears after they gave up a 17-point halftime lead against UCLA in the 2006 Sweet 16. This year’s game also featured a Morrison moment, as he showed up to support his school and was shown on the broadcast…but in a tank top, and apparently extremely sunburned?

That led to plenty of jokes:

My man Adam Morrison fell asleep at the pool pic.twitter.com/dYLeyngjrU

Glad to see Adam Morrison has found work as a yoga instructor/assassin. pic.twitter.com/cYu63FYYH7

Me when this game started vs me right now pic.twitter.com/ySPVg6d07R

Adam Morrison looking like a chill butler who buys only the fiercest stank-weed for the estate pic.twitter.com/1on0zp2DQH

adam morrison looks like a lifeguard who thinks you need to knock off the horseplay in the wave pool pic.twitter.com/R76P1J7Wlr

That last one’s cutting a little close to home. And hey, Morrison did all right for himself; he was drafted third overall by the Charlotte Bobcats in 2006, and while that probably was a mistake (he didn’t play much in his first season, and missed the whole next season with a knee injury before being traded to the Lakers with Shannon Brown for Vladimir Radmanović), he wound up making good money in the NBA and winning two titles with Los Angeles (albeit with extremely limited playing time).

Yeah, pro basketball didn’t work out great for Morrison, but he got two rings and lots of money. And he got another chance to support his school in an emotional moment. He’s got sort of a Matthew McConaughey as Rust Cohle vibe here, so perhaps time really is a flat circle?

Morrison might want to invest more of that money in sunscreen, though. Or shirts with arms? Unless the whole plan here was to get appropriately red to support Gonzaga. If so, bravo.