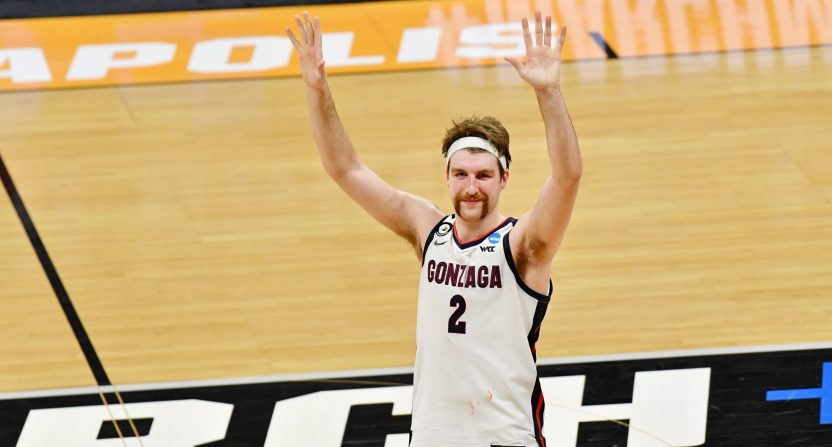 The Gonzaga Bulldogs men’s basketball team has certainly established itself as one of the elite programs in the nation. Mark Few’s squad has spent large portions of recent seasons ranked No. 1, is a regular in the second weekend of the NCAA Tournament, and has made the national title game twice in the last six years.

That said, there are some lingering concerns about the Zags’ ability to get over the hump and finally win a championship. Some point the finger at the fact that they play in the West Coast Conference and their regular season challengers are a far cry from the likes of the Big Ten, ACC, and SEC. And many college basketball fans have wondered for years if the school might eventually consider leaving the WCC for the Pac-12 or another conference.

Given that it’s officially the college basketball offseason, it’s about that time for conference realignment chatter to start up, and what better place to start than with the Eastern Washington school and its powerhouse basketball program?

That’s apparently the case as a message board poster signaled that Gonzaga might be coming close to joining the Big East Conference. Wait, what?

Do people on message boards know anything? No, of course not.

It might be easy to immediately dismiss this as the whims and hopes of basketball fans. But, as Matt Brown points out, in the world of conference realignment, you really do never know for sure.

the weird thing about college sports is that you really do have to call about message board rumors because like, one out of every 30 times, some dude named DRFART69 actually DOES know a regent somewhere

but most of the time…they don't

The idea of Gonzaga joining a conference with East in the title is only crazy if you realize that San Diego State and Boise State once joined the Big East briefly before that plan blew up.

Still, these rumors are simply that. And plenty of people who would know these things chimed in to make sure that was clear. Funnily enough, even when debunking these kinds of ideas, we’ve all learned not to dismiss them entirely as the world of college athletics has done weirder things.

Re: Big East rumors. Could Gonzaga make a move? Sure. Should Gonzaga sit at the table and inquire about said move? Definitely. Does that mean they will make the move? Of course not.

At this point, nothing seems imminent that Gonzaga is joining the Big East. But my personal belief has always been that the program was gonna leave by the next set of TV deals.

The geography still is an issue but if it’s “basketball only”, that would handle it. https://t.co/Iti4QVwPXQ

And of course, plenty of college basketball folks had some fun with the idea that Gonzaga could be in the same conference as Villanova, Georgetown, UConn, and Butler.

But man would that be fun

You, normal: "Gonzaga to the Big East would mean a better conference in men's and women's basketball and also more $$$ in the next TV deal."

Me, deranged: "WE GET 4 GAMES ON WEDNESDAY IN THE BIG EAST TOURNAMENT AGAIN!"

The rest of the Big East hearing these Gonzaga rumors pic.twitter.com/zz5uLh2WBC

This is an April like clockwork Twitter cycle. Season ends, Gonzaga to the Big East rumors start.

Enjoy this one while it lasts. One thing we know for sure…if Gonzaga were to join the Big East, we’d need to have a serious discussion about whether or not the conference has too many bulldog-based mascots. And is there such a thing?