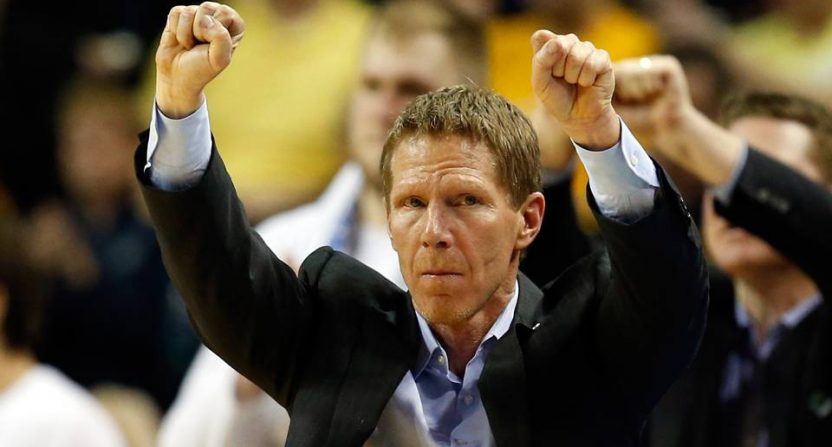 Every memory Gonzaga and Xavier have of the Elite Eight is one of heartbreak.

When the two meet to decide the West Region champion, one will find heartbreak once again. But the other will find something only the top-flight college basketball programs get to feel because, by the end of the day Saturday, one of the best programs to never make a Final Four will have finally made its first Final Four.

The question is if that lucky group will be No. 1 seed Gonzaga or No. 11 seed Xavier.

This will be the fourth Elite Eight trip for Gonzaga and the third for Xavier. They faced a No. 1 seed each time. They lost each time.

In 1999, the 10th-seeded Zags took eventual champion Connecticut to the wire for a 67-62 loss. In 2015, they led Duke, another eventual champion, in the second half but couldn’t buy a bucket down the stretch of a 66-52 defeat.

But the Zags already broke one streak Thursday, albeit a somewhat silly one. After losing all five games to fall on March 23 in program history, their 61-58 Sweet 16 win over West Virginia snapped that spell.

Plus, maybe history is on their side as the Zags are the No. 1 seed this time.

Xavier also faced Duke on the Elite Eight stage back in 2004. The Musketeers made their run as a No. 7, but the Blue Devils edged them 66-63. Four years later, the Musketeers returned as a No. 3 but got trounced by UCLA.

Not that Xavier has ever been a powerhouse, but roles will flip in Saturday’s meeting as the Big East program will be the Cinderella while Gonzaga from the West Coast Conference will be the big, bad No. 1 seed.

Xavier was ranked No. 7 in the AP Poll back in November, but the Musketeers quickly dropped to the 20’s in January and out of the Top 25 altogether by mid-February.

The Musketeers still have a couple of great players — namely leading scorer Trevon Blueitt and do-it-all guard J.P. Macura — but with their starting backcourt gone, they nearly missed the NCAA Tournament. To end the regular season, a pair of not-so-easy wins against DePaul sandwiched a six-game losing streak.

This is Xavier’s 11-game stretch heading into the tournament. I thought they were the worst of the at-larges. Unbelievable. pic.twitter.com/yaoek6lq8C

Xavier was the fifth-to-last team in the Selection Committee’s field. Losing just once to DePaul, and especially losing the Big East Tournament matchup and thus not getting the big win over Butler, could have knocked the Musketeers out of the field completely.

This team was a few plays away from an NIT appearance. It’s a Chris Mack miracle that the Musketeers are still competing for a national title.

Mack’s coaching ability isn’t in question. This is his seventh NCAA Tournament in eight seasons, and Thursday was his fourth appearance in the Sweet 16. But this is his first Elite Eight, which means it’s the first time he can sniff the Final Four.

Meanwhile Gonzaga, despite playing in a mid-major league, has been ranked No. 1 in Kenpom for two months. The Zags have high-major talent in their roster, including Pac-12 and SEC transfers Nigel Williams-Goss, Jordan Mathews and Johnathan Williams.

Coach Mark Few faces the question every year about never reaching a Final Four, but the drought doesn’t bug him.

This was Mark Few's response when asked about getting the monkey off his back and what it would mean to reach the Final Four. pic.twitter.com/48Y2cv4Ghz

Here’s what Few told media Thursday after the West Virginia win, to the chuckles of his players:

First of all, I don’t know that I have a monkey on my back. I don’t certainly wake up with one or walk around with one. So I don’t think these guys think I have one. I don’t think my wife thinks I have one or anybody in my family, close friends. Fishing buddies never talk about it. So those are the only people that really matter to me.

So it would be phenomenal to get these guys, this team that I love deeply, the experience to go to a Final Four. It would be phenomenal to give that satisfaction to all the players that I’ve been so lucky to coach, and to give it to a university that has treated me so incredibly well, and to Spokane who has just been an unbelievable community for us to have our program.

But it’s not about me and my monkeys and my dogs and my cats; it’s about them.

Xavier does not face the same barrage of “Why haven’t they made a Final Four yet?” questions, but reaching college basketball’s pinnacle could fully validate their Big East status four years after joining the league. The Musketeers would be the second Big East team along with last year’s champion Villanova to reach the Final Four since conference realignment in 2013.

And while the outside perception may not matter to Few, to most of college basketball, Saturday’s Elite Eight game could define his career and his program.