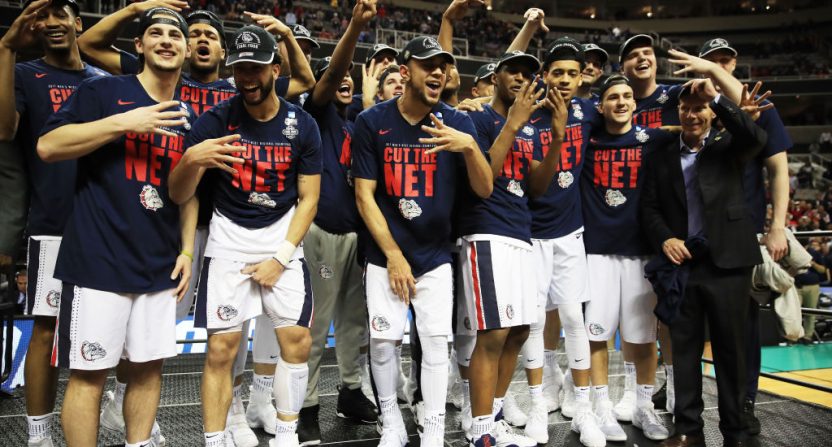 For the first time in program history, the Gonzaga men’s basketball team made it to both the Final Four and NCAA Tournament title game in 2017. The result was not only a loss to UNC in the championship, but also a memorable run that is now being valued at $406 MILLION.

The number is astronomical at first glance and seems ridiculous, but that’s what happens when a school has a historic experience and isn’t a blueblood like Kentucky, Duke, or UNC.

The number was reported by The Spokesman-Review on Thursday. According to Gonzaga officials, the $406 million price tag isn’t simply due to the fact that the Bulldogs made it all the way to the finals, but instead, it’s due to the coverage of the team’s run.

Gonzaga University hired a San Francisco based media tracking company named Meltwater to follow the coverage of the Bulldogs’ six games that took place over 18 days during the tournament. The end result was the $406 million evaluation.

The private Jesuit university won’t be receiving a $406 million dollar check any time soon. The better way to interpret this is the amount of money the Bulldogs would’ve spent on advertising spots that would’ve aired as often as they were covered. But instead of paying for it, Gonzaga received that much coverage for free simply due to their success.

“I think it underscores for everyone in the institution the value of having a great basketball team,” Peter Tormey, a GU spokesman, said Wednesday. “It’s a benefit for enrollment in helping us attract the best and brightest students. And it benefits our fundraising.”

During their tournament run, Gonzaga also set records for website pageviews and social media engagement. On top of that, prospective student inquiries for the 2018-2019 school year are up by 10,000 compared to a year ago, school officials told The Spokesman-Review.

Meltwater’s tracking formula followed television and online coverage of the Bulldogs from their first game on March 16th through the Championship Game on April 3rd.

“The opportunity to be in the spotlight gives us an opportunity to shine a light on our academic programs,” Tormey said. “We’re able to reflect attention on the institution and why it’s so strong.”

“On the day of the national championship game, we had over 350,000 page views on the sites,” said Dave Sonntag, GU’s associate vice president for marketing and communications.

Knowing that more people would visit the school’s website than normal, Sonntag and company developed a strategy to get people even more interested in what the school had to offer.

When people searched for Gonzaga on their phones, they wouldn’t be directed to the school’s main website. Instead they would find themselves on unfold.gonzaga.edu. This website “tells inspiring stories about GU students and showcases other aspects of the university.”

“We made it a strategy, knowing that a ton of people would be searching on their phones for Gonzaga,” Sonntag said.

“It meant the world to us,” Sonntag said. “We’ll do everything to take advantage of that kind of exposure to be a financially healthy university, provide scholarships and get students here to Spokane.”

It’s also safe to say they are happy they didn’t have to spend the $406 million it would’ve cost them to receive this coverage. Instead, they spent a whopping $0.