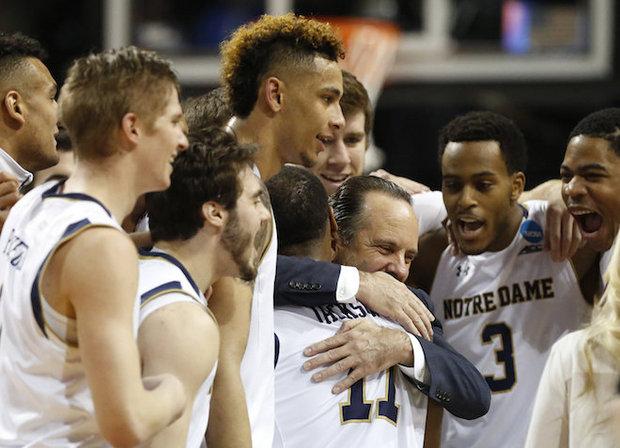 Not everyone celebrates Good Friday, but as with other important days on the calendar, you don’t have to celebrate it to notice it.

One observer of Friday’s East Regional semifinal between the Notre Dame Fighting Irish and the Wisconsin Badgers made the essential connection right as the Irish were putting the finishing touches on a late rally which jolted Wisconsin right out of the NCAA tournament.

I mean, you didn't think Notre Dame was actually going to lose on Good Friday did you?!

In a flash, a dull Sweet 16 found its first moment of Madness.

Wisconsin carried the run of play most of the night in Philadelphia’s Wells Fargo Center. The Badgers have had to rely on their defense this season in the absence of Frank Kaminsky and Sam Dekker, who are now in the pros. First-year head coach Greg Gard — first an interim leader, then a permanent coach after guiding his team to the Big Dance — deftly brought the Badgers along. He didn’t reinvent his team; he brought it back to its roots, and those roots were strong enough to send second-seeded Xavier packing in the second round last Sunday. The Badgers had their formula; they were using it to perfection.

After a three by Vitto Brown broke a 53-all tie with 26 seconds left, Wisconsin just had to be solid down the stretch.

Don’t miss any free throws? Check — Wisconsin did not miss any foul shots in the final 26 seconds.

Don’t turn the ball over?

Oh. That box didn’t get checked.

Check the replayed version of that Notre Dame steal below, which is followed by a replay of the next sequence, in which Wisconsin still had a chance — and a very good one — to retake the lead after the Irish grabbed a 57-56 advantage:

You can see in the video above that Nigel Hayes of Wisconsin was clearly fouled after he lost the ball. The fact that he lost the ball should not have meant that the whistle had to be swallowed. The fact that Notre Dame’s Demetrius Jackson pushed Hayes before collecting the ball should have made it a lot easier to blow the whistle. Wisconsin didn’t get it, however, a cruel plot twist which followed the initial loss of possession.

As you also saw in the video above, Wisconsin’s Bronson Koenig got to the rim for a layup which would have erased Hayes’s mistake and the officials’ non-call of a foul. It wouldn’t have guaranteed victory, but it would have forced Notre Dame to score. Koenig missed. Notre Dame made two foul shots for a three-point lead, and then came the final blow in a series of gut punches to the Badgers’ NCAA hopes:

Notre Dame certainly needed the luck of the Irish in this sequence. Nevertheless, the No. 6 seed in the East ran off an 8-0 burst in the final 20 seconds. A team which had so manifestly struggled in March for a very long time has suddenly managed to win three straight games in which an opponent held a knife to its throat in the final minutes of regulation. Coach Mike Brey notched a second consecutive Elite Eight berth after missing this stage of the NCAA tournament in each of his first 14 seasons in South Bend.

The Irish have risen. They have risen indeed… and it’s not even Easter Sunday yet.

"Kellen Moore, just like the rest of the coaches, will be evaluated."

Dan Quinn "wants to win a Super Bowl" in Dallas.

"I thought I had a good day yesterday."

"Kellen Moore, just like the rest of the coaches, will be evaluated."

Dan Quinn "wants to win a Super Bowl" in Dallas.

"I thought I had a good day yesterday."