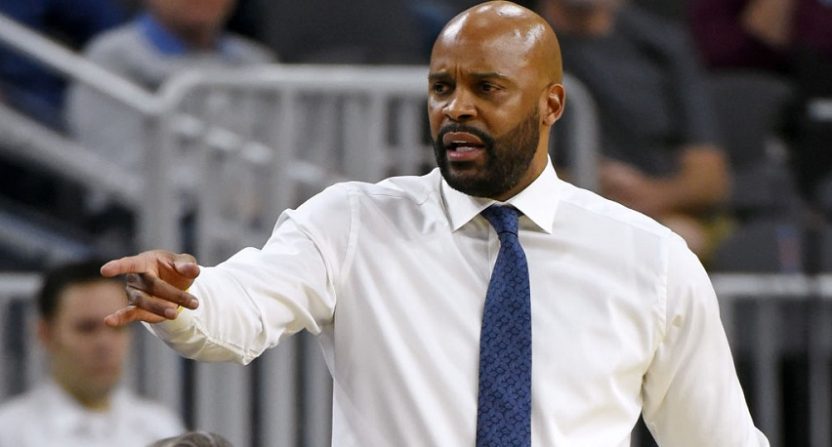 The 2016-17 college basketball season is over. On the court, North Carolina won the national championship. Off the court, the major coaching vacancies throughout the sport have been filled.

Which schools made a big splash? Which might soon have buyer’s remorse? Here’s a breakdown of the nine new major coaching hires in college basketball:

There is always a risk when you oust a known commodity for potential. Tom Crean is a good coach (and according to this account, an even better human being). It was probably 50/50 on whether or not he should have kept his job. You can’t blame him for this season’s injuries. That said, Crean had been at Indiana for nine seasons and perhaps the Hoosiers were due for a facelift. Miller, 38, is a hot up-and-coming young coach. Indiana athletic director Fred Glass is betting long that Miller will grow into the role as the Head Hoosier.

Miller’s credentials: Dayton went to the NCAAs in his final four years, including a memorable run to the 2014 Elite Eight, beating Ohio State, Syracuse and Stanford. However, it’s one thing to win at Dayton. It’s another when you’re facing the pressures of coaching at Indiana. Among the schools with at least three NCAA titles (IU has five), no traditional power has a longer current championship drought than the Hoosiers. Indiana last won in 1987 and has had one Final Four trip since (2002). Fans need to give Miller time to build his program. Amazingly, Miller got an endorsement from Bob Knight.

Knight followed up with his own estimation: "You folks get behind him, and I think you're gonna enjoy some good basketball." #iubb

Kim Anderson had to go. You can’t survive three straight losing seasons at a major conference school. His 27–68 record is the worst in school history. Of course, Anderson had to deal with the NCAA sanctions from the mess that Frank Haith left behind. (13 players transferred after Anderson became coach).

Missouri should be a lot better at basketball, especially since leaving the Big 12 for the SEC. But the Tigers have been mostly mediocre.

So this has to be Cuonzo Martin walking into Mizzou Arena this afternoon pic.twitter.com/b2aGuF9xJq

Cuonzo Martin might be the right guy to take Missouri back to the heyday of Norm Stewart. Martin is well-regarded around basketball circles, but he has been more famous for switching jobs. He coached at Missouri State, Tennessee and California, staying three years at each stop. He’s 186–121 and got Tennessee to the 2014 Sweet Sixteen.

Martin also can recruit, bringing in Michael Porter Jr. — possibly the eventual No. 1 overall pick in the 2018 draft. There doesn’t seem to be a downside here.

This was by far the most surprising hire in the coaching carousel. One day, Brad Underwood is coaching Oklahoma State in a 92-91 loss NCAA Tournament loss to Michigan. It was one of the most entertaining games of the first round. The next day, Underwood leaves the Cowboys for… Illinois (?!?).

Underwood was in his first year at Oklahoma State. This is his third job in as many years (Stephen F. Austin, Oklahoma State, Illinois). Even Chris Beard, who had three jobs in less than a month (Arkansas-Little Rock, UNLV, Texas Tech), thinks that’s crazy.

Oklahoma State is a good job. No, you can never beat Kansas, but nobody else in the Big 12 is beating the Jayhawks either. Why bolt for Illinois, one of the tougher jobs in the Big Ten?

Apparently, money was a big incentive. According to a report, Illinois tripled his salary to $3 million a year. Underwood’s track record is promising, with a 109–27 record over two schools. He brings an exciting brand of basketball. The Cowboys were the most efficient offense in the nation. This was probably as good a hire as Illinois could make.

N.C. State wasn’t satisfied with Mark Gottfried, who had a good but not spectacular run. Two straight losing seasons sealed his fate. But before that, he got the program to two Sweet 16s in his first four seasons. Gottfried was ousted because of the growing expectations in Raleigh. N.C. State was a tough job before the ACC expanded, competing against Duke and North Carolina who have combined to win five championships since 2005. Now, it’s even tougher with Louisville and Syracuse in the league.

"The only negative is having to deal with UNC and Duke, but Kevin Keatts is a great hire" – Dickie V on NC State hiring

Kevin Keatts comes from the Rick Pitino tree. He was an assistant at Louisville and did wonders at UNC Wilmington. The Seahawks improved every year he was there and made the NCAA Tournament during his final two seasons. Keatts should do well and has even embraced the high standards by saying “This is a national championship program.”

Washington has been way behind UCLA, Arizona, Oregon and USC in the Pac-12 pecking order. There is talent in the Pacific Northwest, but if you’re an elite in-state recruit, you’re probably choosing Gonzaga where you have a better chance to be successful.

Mike Hopkins appears to be a solid hire. The former Syracuse head-coach-in-waiting played under Jim Boeheim and had worked for him since 1996. Hopkins was officially appointed in 2015 to be Boeheim’s eventual successor in 2018.

"We came here to take over and that mindset starts now." – @Coach_Hopkins pic.twitter.com/VaMJb8xyoz

It was a surprising move when the news broke that the West Coast native was heading to Washington. Maybe he got tired of waiting. Regardless, Hopkins should be an immediate upgrade over Lorenzo Romar. Romar had some success at Washington, but the program flat-lined over the past five years. By most accounts, Hopkins was more than ready to be a head coach. For a mediocre basketball school like Washington to get a guy who was supposed to replace Boeheim is impressive.

Who’s In: Will Wade
Who’s Out: Johnny Jones

If LSU truly cared about basketball, it would have pushed Jones out the door last year. You can’t have the No. 1 overall draft choice (Ben Simmons) and NOT make the NCAA Tournament. No ifs, no ands, no buts. Incredibly, Jones remained on the job for 2016-17.

Somebody. Anybody is a vast improvement over Jones. Will Wade, 34, is a young guy, having coached at Chattanooga and VCU (91–45). Much-maligned LSU athletic director Joe Alleva might have actually made a forward-thinking move. Most of the coaches in the SEC are more experienced than Wade. But he seems ready for the job. Credit him for keeping VCU’s momentum going after Shaka Smart left for Texas.

One of these days, Georgetown will realize that it’s not the 1980s anymore. You can’t just keep recycling connections to your past and magically think that the Hoyas will return to dominance. Tradition is nice, but you have to live in the modern world where tradition has a much shorter lifespan and recruits have even shorter attention spans. High school kids probably don’t know who Patrick Ewing is.

Patrick Ewing when asked how he will handle recruiting world: "I don't think it's changed that much." Um, yes it has Patrick.

Do not equate this hiring with St. John’s bringing in Chris Mullin. Ewing has been studying vigorously to be a head coach – an NBA head coach – since his playing career ended in 2002. Ewing has no college experience, which means that putting together the right staff and support systems will be crucial.

Strategy-wise, Ewing should be fine. But being successful in the college game isn’t about Xs and Os. It’s about access to talent and getting the right mix of players. Fortunately, the greater Washington D.C. area is one of the most talent-rich in the country. Can Ewing convince players to come to Georgetown? And will Big John be looking over Ewing’s shoulder?

Oklahoma State spent $15,000 on a search firm only to promote assistant coach Mike Boynton. Laughable! A hidden gem of a coach wasn’t discovered by a meticulous search. Oklahoma State simply looked down the bench and moved a guy one seat over.

Boynton is young (35), cheap (five years, $5 million) and has no head coaching experience. He will be the lowest-paid Big 12 coach. That doesn’t inspire confidence and doesn’t help with the accusations that Oklahoma State low-balled Underwood.

Boynton worked for Underwood at Stephen F. Austin and Oklahoma State. Maybe he can finish what his former boss started. It’ll be tough.

This seems similar to the Oklahoma State situation. Coach leaves for a better/better-paying opportunity elsewhere. University immediately promotes the unproven assistant, hoping that the rookie can do just as good a job. Is his assistant ready to be a head coach?

@TMACABQ Yeah, it’s just a “be careful what you wish for” issue…Cal fans didn’t really care that Cuonzo left. Now their coach is Wyking Jones.

Wyking Jones is another former Pitino assistant. Interestingly, he also has a background in acting, having appeared in movies and commercials. Can he play the part of a successful coach? The San Francisco Chronicle reported that some of California’s top boosters weren’t exactly thrilled. Reportedly, one of them cancelled his 14 season tickets. Jones’ modest track record makes this hire a gamble.