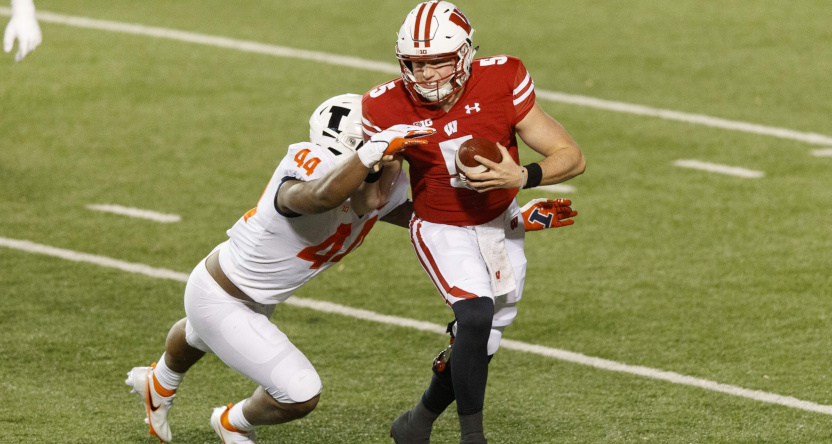 Big Ten football officially kicked off Friday night, and the Wisconsin Badgers look like they are poised to once again be the team to beat in the Big Ten West. And with an impressive starting debut by redshirt freshman quarterback Graham Mertz, the folks in Madison have every right to be thinking about something even bigger than a division crown.

Ohio State isn’t quite ready to be dethroned just yet, but Wisconsin’s 45-7 victory over Illinois on Friday night in an empty Camp Randall Stadium showed these Badgers may have what it takes to be an even more viable threat than they have been in years past. And Mertz was easily the star of the night for Wisconsin.

Taking over the starting job for an injured Jack Coan, Mertz tied the Wisconsin school record with five passing touchdowns, a mark held by Darrell Bevell in 1993 (vs. Nevada) and Jim Scorgi in 2003 (vs. Michigan State). On top of that, he delivered a flawless first-half performance, and finished the night with 20 overall completions on 21 pass attempts for 248 yards, with six different receivers catching a pass. It is safe to say Mertz, the highest-rated quarterback recruit in Wisconsin history, lived up to the hype in his Badger debut.

Odds are fairly good Mertz won’t have a pass completion rate like that again this season (95.7 percent is incredibly difficult to duplicate), but the incredibly small sample size is enough to build excitement for what Wisconsin could do this season. As expected, the Badgers’ defense was locked in. Illinois managed to convert just two of eight third-down attempts, and Illini quarterback Brandon Peters had just 87 passing yards in a difficult season opener.

Wisconsin also responded well to its first dose of adversity on the field this season shortly before halftime. After Tarique Barnes returned a fumble by Badgers tight end Jake Ferguson for a 39-yard touchdown to cut the Wisconsin lead to 14-7 with 3:22 until halftime…

…Mertz and Ferguson connected on a couple of big plays to quickly move down the field and score a touchdown to regain the two-score advantage.

Illinois then went three and out, losing nine yards in the process, before punting back to Wisconsin. One snap later, it was 28-7.

Even for a school that was home to Russell Wilson for one season, Wisconsin hasn’t exactly been heralded at the quarterback position. One season-opening performance by Mertz has potentially changed that narrative. One recent Super Bowl MVP certainly took notice…

The one question that can be taken away from this game is what to make of the Wisconsin running game. After a few years of Jonathan Taylor carrying the load, this year was expected to be a bit of a team effort on the ground until someone broke out and proved worthy of being the main guy. But uncharacteristically, Wisconsin took a while to get the running game going Friday.

Perhaps that was due to the incredible effort from Mertz and Paul Chryst deciding to ride the hot arm of his young quarterback. Or maybe Illinois was just finding ways to slow things down on the ground for as long as they could. Wisconsin still ended the night with 182 rushing yards as a team, with fullback Garrett Groshek leading the charge with 70 yards on 13 carries and Nakia Watson picking up 62 yards on 19 carries. The running game helped salt away the fourth quarter, but the Badgers could run into trouble against some better defenses they will eventually face this year if they can’t create more balance on the offense.

But for one night, football was back in the Big Ten, and Wisconsin continues to be the team the entire Big Ten West is chasing. And if they have their quarterback position locked down with Mertz, it will be difficult for any team in the division to catch the Badgers.