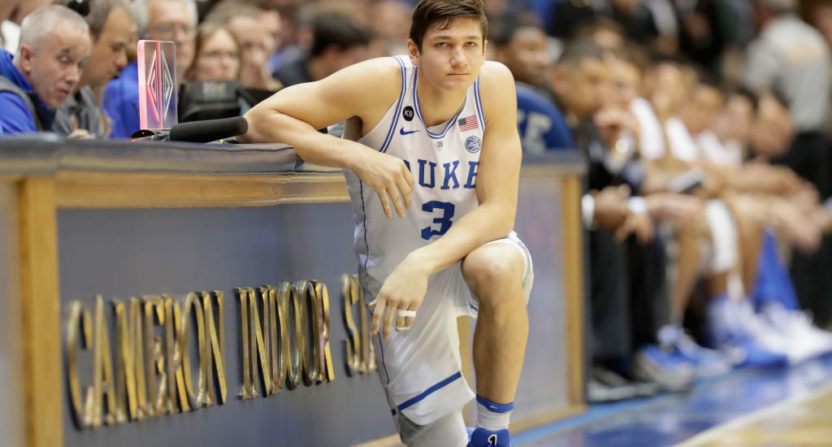 On Monday, The Athletic’s Seth Davis revealed Mike Krzyzewski appointed Grayson Allen as Duke’s lone captain for the coming season. Captain isn’t a terribly important distinction as far as the general public is concerned. Allen was basically the captain by default anyway, considering he’s the team’s lone senior and the only guy who played at least eight minutes per game last season. But there is still something significant in Coach K trusting Allen to lead and represent his team, which has a legitimate argument to be preseason No. 1 for the second straight year.

Allen had a disappointing junior season in more ways than one. After averaging 21.6 points on 46.6 percent shooting as a sophomore, he was a consensus preseason All-American and a popular pick for National Player of the Year. Aside from a series of tripping incidents and controversial plays that led to Coach K stripping him of his co-captaincy, Allen’s play fell off. He finished the season averaging 14.5 points while shooting below 40 percent from the field.

Allen considered going pro but chose to return for one last hurrah as college basketball’s most hated player.

The Blue Devils have a loaded freshmen class that only got better with forward Marvin Bagley III committing and reclassifying. He, true point guard Trevon Duval, forward Wendell Carter and shooting guard Gary Trent Jr. give Duke four of the top 17 freshmen in college hoops, according to 247Sports.

Duke can win the national title with Allen putting up identical numbers to last season. But they’ll get knocked out early again if he doesn’t improve his leadership and emotional maturity.

In Davis’ story, Allen said all the right things about maturing. But we heard that last preseason as well, and things only got worse. However, Allen, with help from Coach K, appears to have taken some more concrete steps this time to grow as a person. He stepped away from the game for three months, relaxing at his parents’ home in Jacksonville and interning at a media company in Chicago. This offseason, he focused on controlling his emotions. Via The Athletic:

Allen insists he isn’t worried. If anything, he is still trying to rediscover the passion he once played with. “I’d actually argue that it’s good to play with emotion,” he says. “Even as a leader, I have to be angry at my team sometimes. If we’re going on a run, I need to be the most energetic and enthusiastic guy. So I think the proper way to use emotion is to direct it at your team, not the other team. That’s what I’m trying to do, learn to master that emotion and not get into some individual battle that’s meaningless.”

Allen may be the most hated player in college basketball, and his reputation — or simply his Dukie-ness — may be too strong to change that. But when you strip that away, a feel-good story pokes through. Allen still has to prove himself, but he’s been presented with an amazing opportunity to go out by leading a young team to a national title.