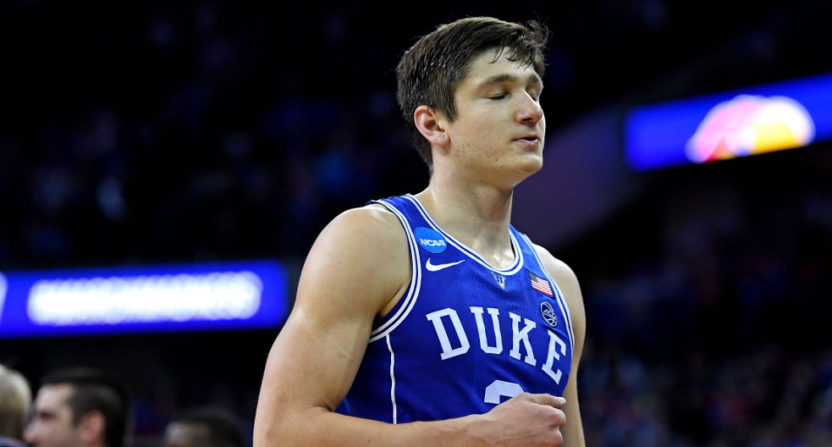 The many people who hate controversial Duke guard Grayson Allen are probably having a pretty good day. Allen was regularly described as “the most hated man in college basketball” heading into this season, his senior year, thanks to a long history of tripping and other accusations of dirty play plus little punishment from Duke coach Mike Krzyzewski, with Allen even being selected as a captain this year. And he went on to have a good season (albeit still with plenty of controversy) and to help the second-seeded Blue Devils make the Elite 8, but they fell short in their quest to advance to the Final Four Sunday, losing 85-81 in overtime to the one-seed Kansas Jayhawks. And several misplays and missed shots from Allen were crucial to that result. First, there’s the shot he tried to make to end the game in regulation, single-handedly driving the lane and getting off a shot over two defenders that hit the rim, hit the backboard, hit the rim again and bounced out:

If that shot falls, and it was oh-so-close to doing so, there’s a very different tone to discussion of Allen coming out of this game. That still probably wasn’t the best play or shot in that situation, especially with the defense keying on him, but he came so close to making it work and to sending Duke to the Final Four. But it wouldn’t go, and that set up overtime. And things got worse for Allen there. Consider this play two minutes in, where his entry pass got picked off by Kansas’ Sviatoslav Mykhailiuk. Allen did well to rush back and almost force a steal (the sequence eventually ended with a Duke foul), but this was still not a great offensive decision from him:

And then, with Duke trailing by five in the final 30 seconds of overtime, Allen got two good looks from three-point range in quick succession, but couldn’t make either:

It wasn’t all bad from Allen, of course. He finished the day with 12 points, four rebounds, four assists and four steals, and he played a critical role in putting Duke up late in regulation. With the Blue Devils trailing 69-68, Allen twice drew fouls on drives, causing star Kansas center Udoka Azubuike to foul out in the process. And he hit all four foul shots to put Duke up 72-69. But Mykhailiuk (who had an outstanding game, finishing with 11 points, 10 rebounds, five assists, and a crucial overtime block) hit a three to tie it, and Allen’s last-second miss then sent the game to overtime. And it should be noted that Allen only hit three of 13 shots from the field all day, the worst percentage of any starter on either team. So having him regularly take these crucial shots may not have been the best call.

Of course, a lot of this was also about what Kansas did well. Mykhailiuk’s play has been mentioned already, and he also threw a brilliant alley-oop pass to Azubuike with just over two minutes left in regulation for one of the best highlights of the game:

And Malik Newman was on fire, finishing with a game-high 32 points while adding seven rebounds and three steals. He was lights-out in overtime in particular, draining 13 points, including this three to put Kansas up 81-78 with just under two minutes left:

The game was an amazing battle overall, featuring 18 lead changes (including seven in three and a half minutes in the second half) and 11 ties. And Duke played well for much of this, and Allen had some great moments, including drawing those fouls and sinking the foul shots late in regulation, a big part of what got this to overtime in the first place. But for many, the overriding memories of the final game of Allen’s college career will be about his missed shots and his misplays. And for those who don’t like Allen, that’s far from a bad outcome.