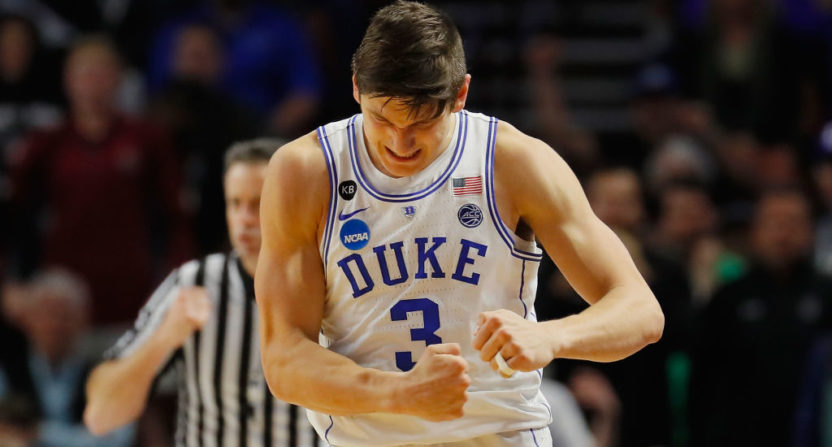 Duke is only three games into the 2017-18 season, but so far the “Grayson Allen finally has his head on right” narrative that the media machine pushed in the preseason looks like more than just talk. No. 2 Michigan State had no answer for Allen on Tuesday, as the polarizing senior dropped 37 points to lead No. 1 Duke to an 88-81 win in the Champions Classic.

As important as the point total and the 7-for-11 three-point shooting, Allen looked locked in mentally in a way we haven’t seen since his breakout sophomore season. The environment, one that felt Final Four-esque at the United Center, didn’t faze him. He got booed for “flopping” and could have reacted poorly when he fumbled the ball out of bounds on a crucial possession with five minutes left.

His turnover allowed Michigan State to retake the lead, but Allen responded by making the extra pass two minutes later, giving Gary Trent a wide-open three that put Duke in front. Allen then hit two dagger threes in the closing minutes to finish with a career-high 37 points.

You’re going to be seeing a lot of Grayson Allen redemption stories, and, as long as he doesn’t trip anyone, he deserves them. Duke has loads and loads of talent. Coach K is recruiting at an unmatched level, and the Blue Devils are running out four freshman starters. If this team will live up to its preseason No. 1 ranking, it’s going to need Allen’s presence not only in the box score but also as a smart, composed senior leader.

Duke got other big-time contributions from its freshmen against Michigan State. Point guard Trevon Duval turned in 17 points, 10 assists and 6 steals, and forward Wendell Carter Jr. was a monster on the glass with 12 boards. But with potential No. 1 pick Marvin Bagley III leaving the game after getting poked in the eye early in the first half, the Blue Devils needed Allen to deliver. He did, and in a big way.

Through three games, Allen is averaging 25.7 points with a 75 eFG%. And he’s been showing off some scary range, like on this first-half buzzer beater from Tuesday.

Tuesday’s performance was reminiscent of Allen’s sophomore season, when he averaged 21.6 points and shot 41.7 percent from three. And most importantly, Allen performed that way in a postseason-like environment against a Final Four contender. Last season, he posted a 99.9 offensive rating against top 100 opponents adjusted for game location, according to KenPom. On Tuesday he posted a 170 ORtg.

After a junior year where most people sent hate his way, Allen has already garnered a ton of praise for how he’s responded as a senior.

Grayson Allen is a baller. Hope he's an NBA success. He's tough as hell. Plays hard. Potential sharpshooter. Has a chance to be really productive.

Getting what we deserve. Too many turnovers. Grayson Allen is showing Miles Bridges how a top-5 player is supposed to take over a big-time game.

Grayson Allen is a bad man …. even though he’s been in school 12 years

I'm ready to officially call it: Grayson Allen is BACK.

Hot take! Grayson Allen made the right choice to come back for his senior season. #duke

Say what you want about Grayson Allen, he can really get loose. Toughness and ability to shoot on the move on full display tonight.

If you thought Allen might fade into the sunset behind an insanely talented freshman class, think again. He’s as locked in as ever, and he’s capable of balling out like this all season.