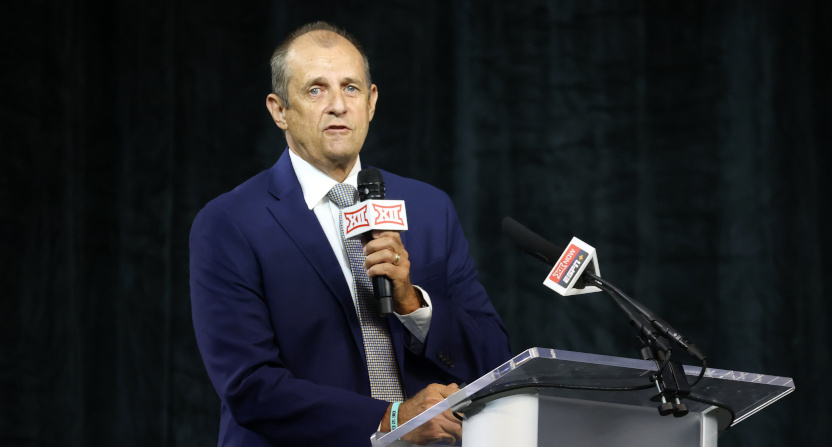 One of the biggest issues with college football officiating has been the inconsistent application of penalties. That’s perhaps particularly noticeable when it comes to what is or is not determined to be an “unsportsmanlike” or “taunting” penalty, and that’s been especially discussed around the “Horns Down” symbol sometimes flashed during games against the Texas Longhorns (with that symbol being an inverted version of Texas’ “Hook ‘Em Horns”). And it doesn’t look like the situation is going to become any clearer any time soon.

At Big 12 Media Days Thursday, conference coordinator of officials Greg Burks (seen above at the same event last year) was asked about this by Kirk Bohls of the Austin American-Statesman. While Burks said he’d clear it up how “Horns Down” penalties would or would not be called this season, he only muddied the waters further.

Big 12 officials coordinator Greg Burks clarified the Horns Down issue. "It's when you do it, who you do it to, and the manner of how you do it." OK, that clears it up a lot.

Big 12's Greg Burks on Horns Down: "Let me be very clear of Horns Down. It's when you do it, who you do it to and which manner you do it, too."

Kirk Bohls asks Big 12 coordinator of officials Greg Burks about Horns Down, as is tradition.

Burks: "I was waiting for that. … I have no ownership on this symbol. It's when you do it, who you do it to and the manner. Please, the state of Oklahoma, I meant no offense."

Here’s a fuller version of the quote from Dave Wilson at ESPN:

“Let me be very clear with Horns Down,” Burks said. “I have no ownership on this symbol. This symbol is the same as all other signals. It’s when you do it, who you do it to and which manner you do it.”

He then made an appeal to the conference’s constituents north of the Red River who are particularly fond of the gesture.

“Please, state of Oklahoma, I meant no offense,” Burks said. “You don’t have to send me emails. We are just looking at that as any other act and you note that unfortunately conduct is in there. It is not about Horns Up or Horns Down is the manner that you do anything on the field to an opponent and an unsportsmanlike manner.”

Many who are fans of the state of Oklahoma, or at least of the Oklahoma Sooners football team (which has received many of the “Horns Down” penalties so far), did, in fact, take offense. But what was funnier still was how the wider college football world reacted to Burks providing even less clarity on the issue:

Can they make a video for the appropriate use, manner and timing for the “Horns Down” gesture?
We need further clarification. https://t.co/F5XDrRrcG4

(Deep, intimidating, concerned adult voice) “Today, you’re going to learn about the dangers of Horns Down. It is a symbol so powerful, some have likened it to the deadliest, most addictive drugs on the street. Horns Down – not even once.”

“Okay, so what if it’s a Horns Down thrown between an Oklahoma and TCU game?” https://t.co/wruVWMpDWQ pic.twitter.com/IKwdS54nxl

As indicated by some of those tweets, some of the criticism of penalties for “Horns Down” has been around the perception that Texas runs the Big 12 and that this has only been penalized because it hurts their fans’ feelings. With the Longhorns now set to leave for the SEC (by July 2025 at the latest, but possibly sooner), many figured the approach to  “Horns Down” penalties might change. But Burks sure didn’t provide any clarity on if it will change, or on how it will be called or not called in general.