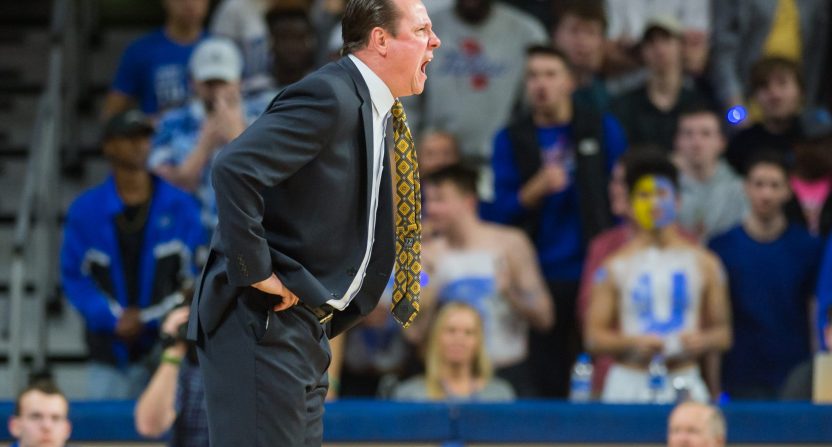 After an investigation into the Wichita State men’s basketball program following allegations of physical and racial player abuse, Gregg Marshall has resigned from his position as head coach.

The news is unsurprising considering the nature of the allegations and how widespread they were, with several players even going on the record. The program has also seen a mass exodus of transfers out in recent years.

Even with the findings, Marshall reached a buyout settlement with the school, as opposed to WSU attempting to fire him with cause.

The university announcement revealed that Marshall will receive a contract settlement of $7.75 million to be paid over a period of six years. One source told CBS Sports that Wichita initially sought to pay Marshall $2 million to depart the program, but the former Shockers coach and his legal team negotiated the buyout to its final number.

“Our student-athletes are our primary concern,” Wichita State athletic director Darron Boatright said. “While the university acknowledges the success of the basketball program under Coach Marshall, this decision is in the best interest of the university, its student athletes and the WSU community. WSU will continue its pursuit of excellence with the help of its student-athletes, staff and loyal supporters of the basketball program.”

Also from that story, a refresher on what Marshall was accused of doing:

The allegations bubbled up privately months ago, and prompted an investigation, in advance of reports from Stadium and The Athletic that published Oct. 9. Both stories, citing multiple witnesses, claim Marshall physically assaulted former Shocker Shaq Morris during the 2015-16 season. Morris spoke on the record to Stadium and described the altercation as a punch delivered by Marshall during a team practice, an account further backed by multiple unnamed players to the Wichita Eagle.

Stadium also earlier reported that former Wichita State assistant Kyle Lindsted was choked by Marshall during the 2016-17 season; Lindsted has not commented on the allegations. The Eagle also confirmed that allegation through unnamed sources. A long list of other alleged misdeeds were depicted in reports from Stadium and The Athletic, including Marshall telling a player of Native American descent to “get back on his horse” in addition to making “Indian howling noises” during the 2018-19 season. In another encounter, Marshall threatened physical violence against a Wichita State student-athlete after the two had a verbal spat following the student-athlete using Marshall’s parking space.

Yeah, that’ll do it, job removal-wise. As for the replacement, Seth Davis reported a week ago that longtime Ohio State coach Thad Matta would be the first choice to replace Marshall, and that they’d prefer to get that done quickly:

If Wichita State parts ways with Gregg Marshall soon as expected, Thad Matta will be at the top of the replacement list. I am hearing the school would like him to start right away and coach this season if they can pull it off. @TheAthleticCBB

Matta obviously has a few decades of experience, but even if they can’t land him, the position should be an attractive one. Hopefully whoever fills Marshall’s role does it with a lot more humanity.