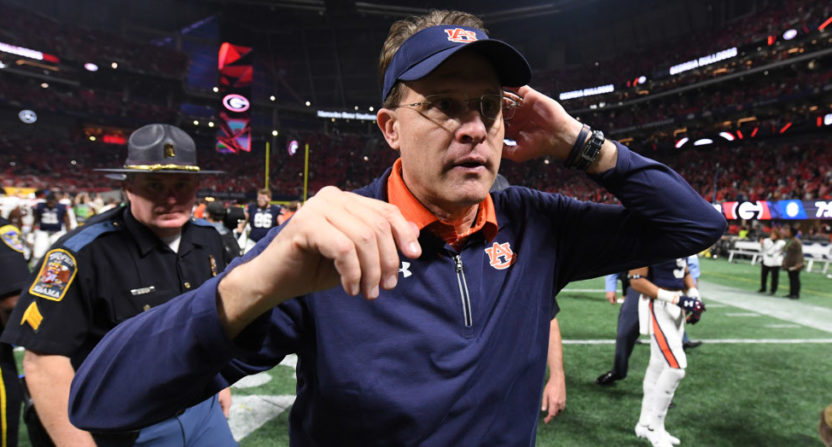 After Arkansas fired Bret Bielema Nov. 24, there was a whole lot of talk about the Razorbacks trying to bring in Auburn coach Gus Malzahn. Malzahn was previously a player (1984-85) and offensive coordinator (2006) for the Razorbacks, was a long-time high school coach in the state, and had previously been under some pressure with the Tigers, so there seemed to be some validity to the idea that he’d leave despite a strong Auburn season. However, when he was asked about the Arkansas job following the Tigers’ SEC championship game loss to the Georgia Bulldogs Saturday, Malzahn said “I’m the head coach at Auburn. I want to be the head coach at Auburn,” and he now appears to have backed those words up after the Tigers offered him a big raise. Brandon Marcello of 247 Sports’ Auburn Undercover site reported Sunday that Malzahn has signed a new deal with the school:

Malzahn has agreed to a deal that will keep him at Auburn after overtures from Arkansas included a deal worth north of $7 million. The numbers in the new contract at Auburn are not yet clear, but the deal will stretch at least five years and could include a raise to as high as $7 million, the source said. Auburn’s buyout was a point of contention during the negotiation process, with more guaranteed money promised to Malzahn should he be fired before the end of the new deal.

The agreement was reached Sunday afternoon.

…Malzahn’s original deal was worth an average of $4.75 million per year through 2020.

The Auburn coach was asked repeatedly about his intentions as he flirted with Arkansas. He continually said he planned to be at Auburn in 2018, but never committed publicly that he was indeed returning. A teleconference with reporters Sunday afternoon included more of the same, leading to the Peach Bowl media representative to try to quiet questions concerning Malzahn’s future.

“I’m planning on being the coach at Auburn next year,” Malzahn said. “I thought that was the last question we were going to ask about that.”

That could be quite a significant raise for Malzahn. USA Today‘s coaching salary database had him making $4,725,000 in 2017, 11th in the country. $7 million would place fourth on that list, behind only Alabama’s Nick Saban ($11.1 million), Clemson’s Dabo Swinney ($8.5 million), and Michigan’s Jim Harbaugh ($7.004 million). However, Jimbo Fisher’s move from Florida State to Texas A&M reportedly came with a 10-year, $7.5 million per year deal (Fisher was making $5.7 million at Florida State as per the database), the largest in college football coaching history, so coaching salaries appear to be on the rise this winter. And Malzahn’s contract would add to that, if the raise is anywhere near what’s been reported. Plus, Fisher’s new contract is reportedly fully guaranteed, which suggests that buyouts will also be on the rise, and makes sense with Marcello’s report that the reworking of Malzahn’s deal included more guaranteed money for the coach.

At the moment at least, this looks like a nice move for Auburn. While the Tigers lost to Georgia Saturday and lost their playoff hopes along the way, they still finished with a 10-3 mark, placed seventh in the College Football Playoff rankings and earned a New Year’s Six bowl berth in the Peach Bowl against No. 12 UCF. And while the season didn’t end quite as well as Auburn fans had hoped, the Tigers still recorded regular-season victories over the two SEC playoff representatives (Georgia and Alabama), both of whom were ranked first in the country when Auburn beat them.

Moreover, Malzahn is 45–21 overall at Auburn and 25-15 in the SEC, including a BCS championship game appearance in 2013. His 8-5, 7-6 (2-6 in conference) and 8-5 seasons since then were more decent than great, but this year’s campaign was definitely impressive. And the Tigers now have stability going into the Peach Bowl and into next year, while the Razorbacks will have to continue their coaching search elsewhere. But Auburn’s paying a whole lot to keep Malzahn around, and for that price tag, they’re certainly hoping they’ll get more seasons along the lines of 2017 and 2013, and less along the lines of those years in between.