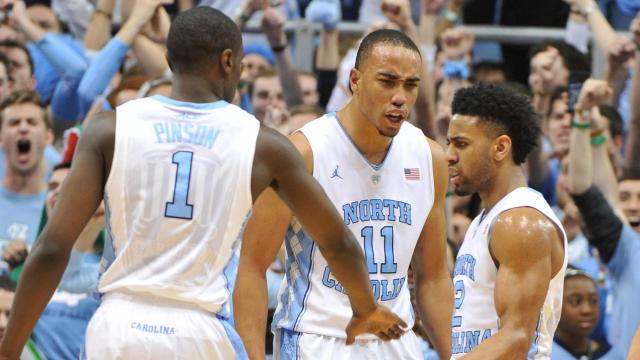 It’s one of the most important sources of success in sports: Don’t let a stomach-punch loss defeat you twice.

The North Carolina Tar Heels could have taken the court at the Dean Smith Center on Saturday with frowns and slumped shoulders. They could have carried doubts and doldrums to their game against the Miami Hurricanes. A one-point loss at home to an undermanned Duke team on Wednesday had created a miserable 60 hours between games for North Carolina. The college basketball community eagerly waited to see how Roy Williams’s team would handle the moment.

The Tar Heels — active on defense and able to make perimeter shots — firmly established themselves at both ends of the floor. They dismantled Miami with unexpected ease, moving back into sole possession of first place in the ACC race.

Brice Johnson, Carolina’s best player against Duke on Wednesday, was his same superb self on Saturday against the Canes. He finished with 16 points and 15 rebounds and made 7 of his 11 field goal attempts. If there’s anyone on the Tar Heel roster Ol’ Roy doesn’t need to worry about, it’s Johnson.

The contributions of Johnson’s teammates represented the fundamental difference between Wednesday’s one-point loss and Saturday’s easy-breezy conquest, which was a done deal midway through the second half.

First and foremost, North Carolina made threes against The U. Just 1 of 13 against Duke, the Tar Heels took advantage of open looks this time. Justin Jackson hit 3 of 4 triples, while Joel Berry made 2 of 3 treys on a day when the Heels canned nine threes, eight in the first 29 minutes.

North Carolina doesn’t have pure shooters, but on days when the shots fall, the Tar Heels are just about untouchable. This doesn’t necessarily mean UNC is likely to make a deep run in March, but it does underscore the point that as long as this team can deliver average jump shooting, it will probably take a tremendous performance to knock off the Tar Heels.

Jump shooting comes and goes for UNC, though, so why are the Tar Heels in contention for a No. 1 seed? North Carolina possesses a lockdown defense and a lethal transition game. Both weapons were very much in evidence against Miami:

A simple game summary for #UNC.

What’s noteworthy about the above sequence is that it shows a live-ball turnover instantly converted into points. When analysts talk about “points off turnovers,” this is the statistic they should refer to: “Points off live-ball turnovers.” That’s a UNC staple this season.

It’s not as though dead-ball turnovers don’t help, of course. North Carolina’s defense thoroughly rattled Miami throughout the second half, and that was never more apparent than in this halfcourt possession:

A simple game summary for #Miami.

The extent to which Miami shriveled in the second half will become a discussion point in the days ahead. While North Carolina certainly answered the bell after a loss to Duke — which many pundits felt would lead to a hangover loss against The U — it has to be said that Miami displayed a jarring lack of resilience.

In a blowout, it generally takes two components — the excellence of the winner and the ineptitude of the loser — to create an surprisingly lopsided result. Miami will be closely watched next week; if it continues to tumble, Saturday’s game in Chapel Hill will be seen more as the Canes’ crisis than the Tar Heels’ turning-point triumph.

Just the same, however, you won’t hear anyone in Carolina colors complain about Saturday’s performance… unless the complaint is that it should have occurred against Duke.

UNC’s about-face from Wednesday to Saturday is reflective of the chaotic nature of this college basketball season. If you don’t like a team’s performance or its larger situation, just wait five minutes. Things will change. Conversely, if you feel good about your favorite team, a stumble is just around the corner.

The Duke team which so impressively won in the Dean Dome on Wednesday lost a double-digit second-half lead (up 11 with under 12 minutes left) and fell at Louisville on Saturday. North Carolina (11-3 ACC) is once again two games ahead of Duke (9-5) in the ACC race. The Tar Heels carved out a one-game lead over Miami, which is tied with Virginia at 10-4. Louisville, ineligible for the ACC Tournament, is also at 10-4, while Notre Dame sits at 9-4 before playing Georgia Tech on Saturday night.

What a difference a game makes for North Carolina. In a cluttered ACC and a highly confusing college basketball season, this unexpected romp over Miami was merely the latest of many plot twists on Tobacco Road.

Expect more swerves and shape-shifting moments in the next few weeks, before an ACC Tournament which promises its own banquet table of chaos.