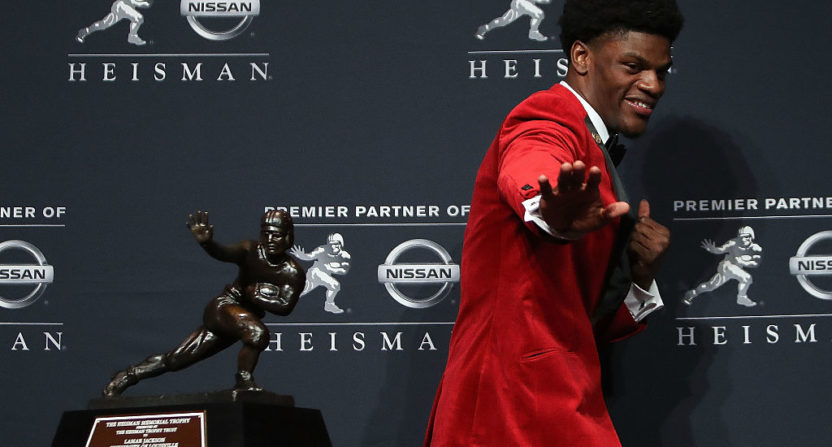 When he wasn’t grabbing his crotch and smack-talking Kansas players and fans, Oklahoma quarterback Baker Mayfield once again showed why he has been considered the easy favorite in the Heisman Trophy chase coming down the home stretch of the college football season. Mayfield’s three-touchdown performance against the Jayhawks helped lead the Big 12 frontrunners to a 41-3 win on the road, which was to be expected.

It may not have been one of Mayfield’s best games this season, but it didn’t need to be either. Even so, completing 20 of 30 pass attempts for 257 yards and three touchdowns will do nothing to suggest the Heisman Trophy is now suddenly up for grabs. Mayfield’s Heisman resume is looking pretty solid when it comes to the stat sheet. The only setback he has going for him is his conduct on the field before, during, and after games.

Mayfield now leads the nation in postgame apologies for his actions put on display during the heat of the moment, and there will be some Heisman voters who take that into consideration when casting their Heisman ballots. Granted, Mayfield will still be on just about every Heisman ballot submitted this year, but it is silly stuff like this that could end up costing him a first-place vote here or there.

The Heisman is still going to be awarded to Mayfield in a few weeks in New York City. It is now just a matter of deciding what individuals will be fortunate enough to be on hand to witness his acceptance speech in person.

This week proved to be yet another example of why forgetting about last year’s Heisman Trophy winner was just silly. Lamar Jackson continues to pile up incredible numbers this season, and he is gaining some late national props to suggest he should be returning to New York as a finalist for this year’s award. Just to be clear, as the 2016 Heisman Trophy winner, Jackson is free to attend the event anyway, but is making a case to be sitting with the finalists instead of with the fraternity of past Heisman Trophy winners.

There isn't a college football player better than Lamar Jackson. In a monsoon, with a 47 minute weather delay. pic.twitter.com/HhZOjkfoh2

Jackson brought his season total up to 23 passing touchdowns and 17 rushing touchdowns, and he has rushed for a touchdown in eight consecutive games. He has also rushed for no fewer than 111 in five straight games. Now, Jackson will get a chance to score revenge against Kentucky next week. The Wildcats handed Louisville a loss last week to take some of the steam out of Jackson’s run to the Heisman. It obviously did not hurt his chances to win the award, but the critics were out in full force for how Jackson and Louisville ended the 2016 season.

Putting up these types of numbers against Kentucky would help change that narrative.

While Baker Mayfield was showing no class at the end of his game, this is what Lamar Jackson was doing on his way off the field. Take note Baker, it's not all about you. @UofLSheriff50 pic.twitter.com/KKDcJKvZK9

Another Heisman Trophy contender who bounced back in a big way this week was Penn State running back Saquon Barkley.

Barkley and Penn State finally got the running game and the offense back on track, and playing Nebraska was the perfect medicine to cure the recent ills with the football. I have strongly maintained that Saquon Barkley should remain a finalist for the Heisman Trophy even while his numbers were taking a solid dip.

Penn State’s offensive line simply has given Barkley little chance to do anything over the last month, but Nebraska’s defense had more than enough holes to take advantage of, and Barkley did just that right from the start. A 65-yard touchdown run on Penn State’s third play from scrimmage quickly eclipsed Barkley’s rushing total from each of his last three games, and he was just getting started.

Barkley was taken out of the game in the fourth quarter for good after rushing for 158 yards and three scores on 17 carries, and 66 receiving yards on six receptions. Though he had been used on kick returns for much of the season, Penn State did not get a kick return out of Barkley in this one as Nebraska altered their approach on special teams similarly to recent Penn State opponents. Barkley has returned two kickoffs for touchdowns to start games this season.

With what he accomplished on Saturday, Barkley should absolutely be on his way to New York City as a Heisman Trophy finalist, although he still has one more game to make a statement. Other running backs may have better numbers in a variety of categories, but Barkley proved once again how dangerous he is with over 200 all-purpose yards. Even if it was against Nebraska.

One of those running backs with better numbers is Stanford’s Bryce Love. Love has been banged up lately, but he has eclipsed Barkley in the Heisman race according to many around the country. That would be hard to argue, especially after last week with his performance against Washington. Even though he was playing on a bum ankle, Love still put together a 100-yard day in a win against Cal to keep Stanford in the Pac-12 South race.

Love’s 57-yard touchdown run was crucial in a 17-14 victory for the Cardinal, and that alone may be enough to cement a chair in New York. He will get a couple more showcase opportunities with Notre Dame coming in next week and a possible appearance in the Pac-12 Championship Game against USC.

And that game should be a good one. Notre Dame will come in looking to keep their very slim playoff hopes alive. It will also be the final game this season for their own Heisman contending running back, Josh Adams. In a 24-17 victory over Navy, Adams rushed for 106 yards but we held out of the endzone. Adams’ own Heisman run took a critical blow the previous week in Notre Dame’s blowout loss against Miami, but Adams may very well still be on the radar.

One player who may have fallen off the radar this season is Arizona’s late-bloomer Khalil Tate. Tate has been so incredibly fun to watch in the second half of the season, but the thought of watching Tate run his way to the Big Apple will have to wait a year. Tate was picked off twice and held to just 32 rushing yards in Arizona’s 48-28 loss on the road at Oregon.

If there is one player who may have been lost in the shuffle but continues to make his own case for an invite to New York, it would be San Diego State running back Rashaad Penny. Penny is closing in on a 2,000-yard season after rushing for 222 rushing yards against Nevada on Saturday night. He also returned a kickoff and a punt for a touchdown for a four-touchdown night. In the process of his big night, he also made some notable school history.

Penny has been a pure class act all season long ans his numbers suggest he is more than worthy of a trip to New York as well. How voters will respond will be interesting to see given Penny plays for a Group of Five program not even in the hunt for a spot in the New Year’s Six bowl lineup and won’t be playing for the Mountain West Conference championship. But he did out-perform Bryce Love in a head-to-head matchup earlier this season.

At the end of the day, Mayfield still appears to be en route to New York City to accept the Heisman Trophy this season. How many finalists will join him? After Saturday, it would appear there is a good chance to see three additional players join Mayfield. As of now, that looks to be Love, Barkley, and the 2016 Heisman Trophy winner.