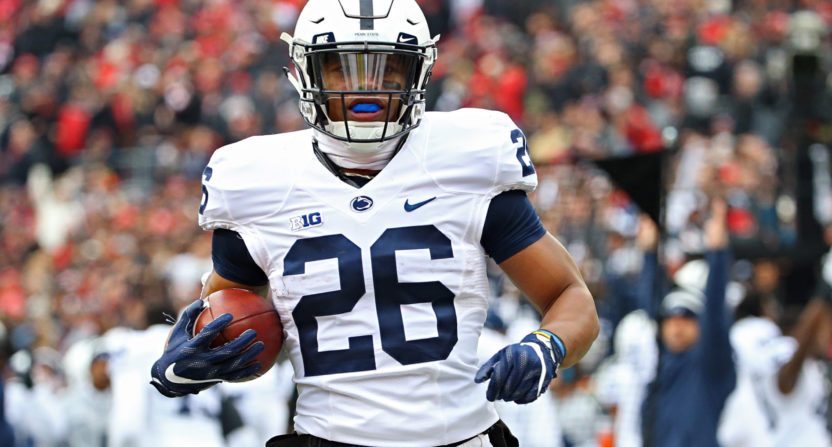 Oklahoma quarterback Baker Mayfield will win the Heisman Trophy on Saturday evening in New York City. It is a foregone conclusion seemingly determined a month ago. When Bovada pulled the Heisman odds from the board weeks before the conclusion of the regular season, it was clear that Saturday’s Heisman Trophy ceremony will be nothing but a routine that must be conducted to fill the programming airtime ESPN paid for.

Two players will be there as finalists to observe Mayfield’s acceptance speech. Stanford running back Bryce Love and Louisville quarterback and 2016 Heisman Trophy winner Lamar Jackson were invited to Saturday night’s ceremony. To have just three finalists for the Heisman Trophy presentation was a bit of a surprise to many, but it also probably made sense considering the situation.

It is important to understand how the naming of the Heisman finalists unfolds. It starts with the ballots to Heisman voters. There are only three spots on a Heisman Trophy ballot. Some years, there will be some good competition for the award. Others, like this year, there will be a landslide favorite.

In a year like this, Mayfield undoubtedly appears on the first-place spot on a healthy majority of the ballots submitted. Who appears on the second and third-place spots is up for grabs. Once all of the ballots have been submitted, the votes are tallied and the finalists invited are based on the vote total. With just three finalists being invited this season, it would suggest there was a considerable bit of separation between the player getting the third-most votes and the player receiving the fourth-most. And that is why a player like Penn State’s Saquon Barkley or San Diego State’s Rashaad Penny will be watching the Heisman Trophy ceremony from home instead of the front row at the PlayStation Theater in Times Square.

After leading the nation in rushing during the regular season w/2027 yds, SDSU's Rashaad Penny should be in NYC for the Heisman Trophy ceremony! While not the winner, a strong candidate & finalist. @Aztec_Football @ESPNMcGee #campusconversation

Rashaad Penny from San Diego St. got hosed not getting an invite for the Heisman trophy, wouldn't have won it, but ran for 2,000 yards and numbers overall better than Bryce Love…

On Wednesday morning, the Paul Hornung Award, which honors college football’s most versatile player, announced its winner for the 2017 season. Penn State running back Saquon Barkley was this year’s recipient. To some, the idea that college football’s most versatile player in the sport not being named a Heisman Trophy finalist seems silly. But then again, the award has different criteria from the Heisman Trophy and any other player of the year awards.

The Heisman Memorial Trophy annually recognizes the outstanding college football player whose performance best exhibits the pursuit of excellence with integrity. The winners of the trophy epitomize great ability combined with diligence, perseverance, and hard work. The Heisman Trophy Trust’s mission is to ensure the continuation and integrity of this award.

Some voters will likely use that mission statement to defend not voting Mayfield for first-place in the balloting once the votes are revealed. As we have touched on previously, Mayfield’s antics will rub some people the wrong way and could potentially cost him some first-place consideration. It just won’t be enough to prevent the inevitable this weekend.

However, if the Heisman Trust’s mission statement is to recognize college football’s best players who have exhibited great ability with integrity, then not finding a chair for Rashaad Penny in New York needs some explaining.

In early October, shortly after the city of Las Vegas was hit hard by a mass shooting at an outdoor concert, Penny deflected a question about his status in the Heisman race by immediately addressing his concerns to the city of Las Vegas, no matter how much Coley Harvey wanted him to mix it up a little with Penn State’s Barkley.

Rashaad Penny was not interested in talking about the Heisman Trophy. Class act here. https://t.co/CuE5fQlOIe

It doesn’t mean a player like Penny or Reynolds or Barkley has to win the award. But having them in New York shines a light on one more positive influence the sport of college football has to offer.

Make no mistake. Mayfield, Love, and Jackson are absolutely worthy of being in New York for the Heisman Trophy ceremony. Nobody should argue against any of the three being there. But the Heisman Trust falls short on maximizing the potential to share the best college football can provide by not having room to seat Penny and Barkley. If nothing else, this feels like a great year to have done so.

Thank you to all of my fans and teammates for the consideration! However, like I stated previously I do not need a trophy or to be named a finalist to define me as a player. I’ve earned the respect from my teammates and coaches, therefore, at the end of the day that’s the only thing that matters! Congratulations to all the deserving Heisman finalists! Once again thank you! #WeAre

A year ago, Jackson won the Heisman Trophy by a good margin ahead of Clemson’s DeShaun Watson. Mayfield was in the room to watch the ceremony as a finalist, finishing third in the voting. Two more players were sent to New York despite having very little chance of winning the award: Oklahoma wide receiver Dede Westbrook and Michigan linebacker Jabrill Peppers. The latter two received 209 and 208 points in the voting, respectively. Jackson received 2,144 votes, and Watson received 1,524 (Mayfield received 361 votes). If there was room for five finalists in a year with a runaway favorite for the award, why was that not the case this season?

Or, perhaps, this season’s voting will be much closer than many are expecting. Two years ago, Alabama running back Derrick Henry edged out Stanford’s Christian McCaffrey and Clemson’s DeShaun Watson. There were only three finalists, and the voting suggests why. Henry received 1,832 votes, while McCaffrey earned 1,539 and Watson picked up 1,165. The first non-finalist in the voting after that? That was Mayfield, with 334 points in the voting. If this is an indication of how the voting will look on Saturday, then the Heisman Trust is off the hook for only having three finalists this season.

Saturday will be our first look at how the Heisman voting went down, and will be the first time anyone with a ballot will be permitted to explain their individual ballot. The Heisman Trust has put a code of secrecy in effect for the Heisman voting to crack down on previous straw polls that would essentially ruin the surprise. We all look forward to seeing what the Heisman voters think. Some voters have expressed a desire to be able to expand their ballot as a way to help branch out the list of finalists. Not because there are that many more players worthy of actually winning the award, but because there are more players that deserve the honor of being a finalist for the award.

It really is an honor to be named a Heisman Trophy finalist, and the showcase opportunities that come with it help share their individual stories. The sport of college football benefits by having those stories shared.