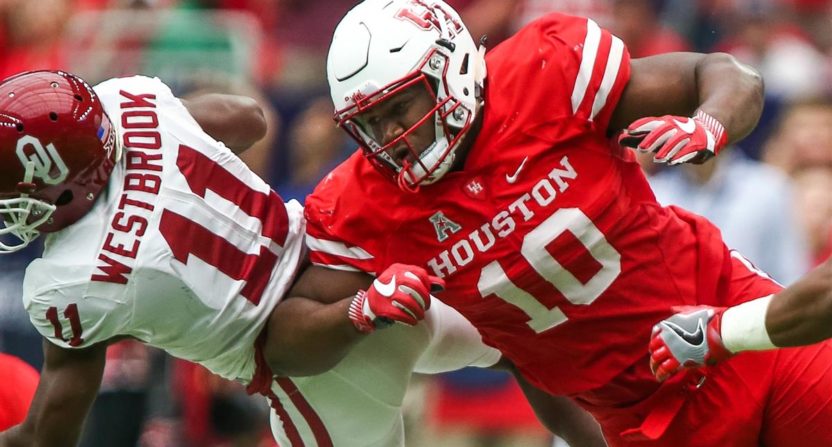 The Comeback’s college football preview coverage continues with the next team in our Top 50 countdown, the Houston Cougars. We’ll move up the list each day, leading up to the beginning of the regular season.

The Houston Cougars program has been one on the rise over the last bushel of years. From Art Briles, to Kevin Sumlin, to Tom Herman last year, it’s becoming the new layover in a cradle of coaches. The result is a team that seems to always be in the conversation for the best of the non-power conferences.

And this year is one of transition yet again as Herman is off to Texas, leaving the reigns of the program to his former offensive coordinator Major Applewhite. Will it be a seamless transition with continued upward momentum, or will the Cougars take a step back in the collective psyche of the country’s perceptions?

The 2016 season started out extremely promising for the Houston Cougars. Game one was a challenge, going against Bob Stoops, Baker Mayfield and the No. 3 Oklahoma Sooners. The Cougars already had the respect of the college football world, but when they beat OU 33-23, everybody began to take notice and penciled them in as the favorite to land a spot in the New Year’s Six Bowls. Many even had them on an inside track to the College Football Playoff.

The Cougars used the confidence of the Oklahoma win to rattle off four more straight wins and sat at 5-0 with a national ranking of No. 6. A trip to play Navy and the dreaded triple-option attack loomed. Many teams’ dreams seem to die against the palate of discipline needed to keep an option team between the guardrails, and it happened to Houston as well. The Cougars ultimately dropped the game in Annapolis 46-40, and it was time to reset expectations.

The rest of the season wasn’t exactly built on press clippings and adoration. Quarterback Greg Ward Jr. struggled at times, and the defense gave up far too many yards and points down the home-stretch. Houston limped to the end of the season, losing three of its last six, including Major Applewhite’s debut at the Las Vegas Bowl.

The Cougars signed the fourth-best recruiting class in the AAC, according to 247 sports.com. Obviously, Houston has to mine for undiscovered talent in a lot of cases, and that would be the same for 2017’s class. Of the 19 new editions, 15 rated the highest as three-star recruits. Clearly, the coaching change took a bit of a toll, but Houston typically does as good as anyone at finding talent, plugging it in the right places, and then developing the players into a system.

The most likely recruit to make an impact would have been defensive end Bryan Jones from Baton Rouge, Louisiana. He’s ranked as the 15th-best strong side defensive-end in the country, and comes off the assembly line ready for production at 6-foot-5, 240 pounds. Unfortunately, he won’t be joining the program until January after not being to make it into the school in time for the fall semester. He won’t be the only player you’ll be familiar with when it’s all said and done. Want proof? Greg Ward Jr. was the 944th rated recruit in the class of 2013. He developed fairly well if memory serves me correctly.

39.0 – The number of sacks the Houston defense came up with last year. The aggressive D loved to pin its ears back and get after the quarterback in 2016. When it had success, it was a game-changer. But in three of the four losses, the defense had a harder time reaching the quarterback. Of course with the coaching change, Mark D’Onofrio and Clay Jennings are now responsible for keeping the same level of production going. And if D’Onofrio’s time at Miami is any indication, you can expect the same type of attacking style. That should fall right in step with the returning personnel.

100.2 –The average yards per game the Cougar defense gave up. Good for fourth in the country. And that’s with giving up a whopping 306 yards on the ground to Navy. The first thing that comes to mind when you think of a Tom Herman team is offense, but the Cougar defense bailed the team out on many occasions in 2016. Most often, it was by throttling the opposing offenses’ running game, making it a one-dimensional type of affair. Now it’s time to keep things cranked up for the 2017 season under the new staff.

98 – The number of tackles for loss the Houston offensive line gave up. Yeah, a lot of it had to do with quarterback Greg Ward, Jr. keeping plays alive, but that number is way too high for any offense to live with. It was a very young O-line last year, but all five starters return. The extra year of seasoning should result in much better pass protection for whatever quarterback is throwing lasers in the Cougars’ high octane offense. It better be if Houston has any designs of winning the league.

Record in the last five meetings: 4-1

Why it matters: With what both teams have coming back, this one could be for the West Division title. There is little room for error, and a loss at home to the Tigers could potentially derail the season’s goals and aspirations just as things are starting to roll to a boil. It’s also a bit of a revenge game. Memphis bombed away at home against the Cougars last year to the tune of 409 yards through the air. The effort simply has to be better this go around.

What a game! Weather was crummy but it was still lots of fun. Navys first top 10 win since 1984! #NavyFootball #NAVYvsHou #stormthefield pic.twitter.com/4bPi9EnpGd

Record in the last five meetings: 2-1 (the two programs have only played three times)

Why it matters: Navy sent the Houston season into a downward spiral last year in the midst of a driving rain, courtesy of the remnants of Hurricane Matthew. The Midshipmen ran all over the vaunted Houston defense, and the Cougars had far too many costly mistakes and turnovers to pull it out in the end. Navy went on to win the division and Tom Herman’s crew lost confidence and came out of their orbit a bit. It could be an all-important mental block to get through the fire on this one. You think the triple-option has been studied up on in the off-season?

Kyle Allen, QB – The quarterback competition is still open, but the call here is for Allen to win the starting job. Last time we saw the 6-foot-3, 210-pounder, he was throwing his weight around at Texas A&M before deciding to move on because of playing time. He was all too inconsistent in College Station, but if he can bottle the promise and potential that we’ve all seen and heard about, he’ll put up some astronomical numbers and be the star of the conference. Now, it’s all about getting it right between the ears.

Ed Oliver, DT – The super sophomore is ready for an encore as one of the best interior pass rushers in the college game. All he did last year was rack up 66 tackles, with five sacks and 22.5 tackles for loss. The Cougars love to get into the backfield and disrupt things, so he’ll be turned loose. You can take it to the bank that he’ll be double and tripled team on almost every play in 2017. He’s that good and has already been named to several awards’ watch lists for this season. You might want to put him on your list to watch as well.

Linell Bonner, WR – If Kyle Allen does make a name for himself in 2017, the 6-0, 202 lb. Bonner will have a lot to do with it. He was the go-to guy last year for Greg Ward, Jr. with 98 catches for 1,118 yards and three touchdowns. He may not stretch the defense down the field, but the senior has a knack for finding soft spots in the defense and using his great hands to snatch the ball out of the air and move the chains. He’ll be a warm cup of milk for Allen when yards are needed, and should have a ton of production yet again.

Houston’s record will be better without Tom Herman. There’s enough back on both sides of the ball to expect a run at the conference title. The offense won’t miss a beat plugging Kyle Allen into a system that won’t change much under Major Applewhite. The defense will still get it done with a mix of returning talent and fresh faces that’s good enough to play at the same high level as last year.

Quarterback Kyle Allen will be a Heisman contender. This isn’t that far of a stretch. Allen was a super recruit and burst onto the scene with Texas A&M as a freshman back in 2014. He hit some rough patches and lost the confidence of head coach Kevin Sumlin, but he has all the tools to be special in this offense. Plus, he’s got a solid group of receivers and an offensive line that should be ready to rock after a year of seasoning. It could all add up to some eye-popping numbers in the fall.

The defense will actually be better than last year. I know, I know. Starting middle linebacker Steven Taylor is gone, and the coaching staff must replace both corners and two linebackers. But leading tackler LB Matthew Adams returns as does the disruption of DT Ed Oliver. Mix it all with a good hire in Mark D’On0frio at defensive coordinator, and the Cougar D will be ready to get after it again.