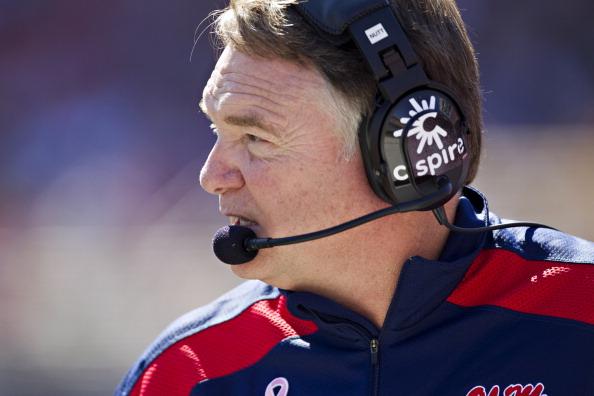 Houston Nutt was fired as Ole Miss football coach in 2011, and although he’s probably still a little bitter, he’s already gotten back at the school that fired him, and his replacement, more than he could have ever imagined.

Nutt sued Ole Miss, claiming that coach Hugh Freeze made calls to reporters saying, unsubstantiated, that most of the NCAA violations committed by the program came under his tenure. Nutt said that defamation hurt his career. In researching Freeze’s phone calls, Mississippi State Scout writer Steve Robertson found that Freeze had made calls to an escort service, which forced Freeze to resign.

So ever since Nutt filed his lawsuit, Ole Miss and Freeze have been disgraced.

Now, Nutt says he doesn’t want money for himself, just an apology and money for an ethics commission.

Houston Nutt’s attorney has offered to settle the former coach’s federal lawsuit against Ole Miss if the university apologizes for making inaccurate statements about him to the media and donates $500,000 to establish a state commission on sports ethics, sources with knowledge of the case told ESPN on Monday morning.

“The settlement proposal we presented to Ole Miss [on Friday] is focused on the apology Houston Nutt has consistently asked for and fully deserves,” Mars said. “After all, there’s no longer any doubt about what happened here.

“More than a few unbiased sports reporters have talked openly on the radio and in podcast in recent weeks about how Hugh Freeze ‘lied’ to the press in order to falsely portray Houston Nutt as the primary target of the NCAA’s investigation. What’s more, other journalists have come out of the woodwork since the lawsuit was filed to share with us their personal recollections of how they too were duped by Coach Freeze. If for no other reason, Ole Miss owes Houston an apology.”

And at this point, it probably hurts Ole Miss—a very rich athletic program—more to apologize to Nutt than it does to give him a few bucks. Don’t mess with Houston Nutt; he’ll steal your pride.